A COMIC'S VIEW: The Donald v The Potcake 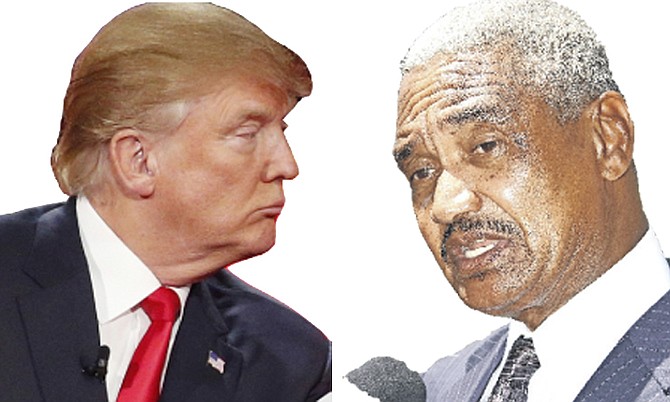 This week, both ‘The Potcake’ and ‘The Donald’ were busy making headlines while the rest of the world looked on in shock and awe.

On Tuesday night, comedians everywhere giggled maniacally as we were collectively delivered a gift from the ‘comedy gods’ the likes of which we haven’t seen since George ‘Dubbya’ Bush left office eight years ago: Donald J Trump - aka The Hair - became the presumptive Republican nominee for president of the good ole US of A.

Eight months ago, the possibility of the billionaire real estate mogul ascending to the top of a major political party seemed remote at best. If you had asked me back then, I would have told you that ‘The Donald’ had as much chance of beating out his 17 Republican rivals as I have at going through the airport without secondary screening.

But here we are. Where that is exactly, I don’t have a clue.

It’s almost unimaginable that the same man who once proclaimed “you can never be too greedy” is a toupee’s length away from snatching the most powerful position in the free world. And it’s not like the man is definitely an absolute idiot; it’s that no one can be sure if he’s an absolute idiot.

On the one hand, he’s been fairly successful (if you believe his books) at winning at everything in life. He’s got the bankbooks, buildings and ‘babes’ (Twitter handle @BabesForTrump) that are the usual trophies to prove it.

On the other hand, he’s uttered some of the most crass, incendiary, politically incorrect statements and sentiments in a generation.

Not that he cares. In fact, he pointed out that he doesn’t “have time for political correctness”.

That, and also that women are “pigs” and Rosie O’Donnell has a “fat, ugly face”. His likely Democratic opponent, Hillary Clinton, is now being referred to by Trump as “crooked Hillary”.

Don’t get me wrong. Donald Trump has plenty of insults to go around to men he considers antagonists as well (which “little Marco” Rubio and “lying Ted” Cruz found out the hard way). But there is definitely something more visceral about the way he takes on women he dislikes. Something more off-the-cuff, dangerous and alarming.

As a comedian, I relish the Donald jokes my comedian brethren and I will feast on between now and November. Right up until election day. But if Trump wins, my favourite phrase - ‘laugh now, cry later’ - may come back to bite me in the you-know-what. Like a dog.

Speaking of canines, our very own politically incorrect politician, Leslie O Miller, aka “The Potcake”, found his name in the headlines once again.

In the midst of what has become a hotly debated gender equality (some say citizenship) referendum, the Tall Pines MP offered up commentary that even had Progressive Liberal Party Chairman Bradley Roberts running for the hills.

After a group of transgendered Bahamians seemingly grabbed the spotlight on the upcoming vote, Mr Miller voiced his opinion that they should be ‘exiled’ to their own island. This drew swift criticism from within Mr Miller’s own party and forced the even more politically incorrect Bradley Roberts to say that Miller’s comments “do not reflect the policy position of the Progressive Liberal Party or the government of The Bahamas”.

Do you know what it takes to get Bradley Roberts to openly object to a statement or action (or in many cases inaction) by a member of a PLP?

When asked if he would apologise for his remarks Mr Miller did what we would expect Donald Trump to do. In other words, he did not apologise. In fact, his exact words were: “For what? I don’t see the need.”

More than anything else, this week has spoken volumes to me about the current (and future?) crop of frontline politicians that we see in 2016. Gone are the days when they choose their words carefully or give two cents what the people think. The new trend is to say whatever is on your mind whether people agree with you or not. Whether your words are true or not. Whether your words are responsible or not.

While I was shocked at Mr Miller’s comments (as I often am with Trump’s) I was equally surprised that Fred Smith, QC, who I consider a brilliant legal mind, would suggest the courts are a way to deal with outrageous remarks like the ones Miller made. I strongly agree with Mr Smith that we need a Human Rights Act. I strongly disagree that we should make it a “criminal offence and civil liability to express hateful and venomous words”.

Not that I like hateful and venomous words (who does?), but I do enjoy free speech above all. And legislating free speech beyond what is on the books now (you know, the usual slander/libel stuff) is just not something I can ever agree to.

The way forward is for communities and societies to decide (a la referenda and elections) on the road they want to tread into the future. The way forward is for civic organisations as well as political and religious communities to disavow or condemn comments they do not want to be associated with. Democracies require all voices to be heard, whether we agree with those voices or not.

Ironically, one of the most interesting quotes I’ve heard from a politician in a while comes from Donald Trump himself.

According to Trump, “One of the key problems today is that politics is such a disgrace. Good people don’t go into government”.

• Inigo ‘Naughty’ Zenicazelaya is the resident stand-up comic at Jokers Wild Comedy Club at the Atlantis, Paradise Island, resort and presents ‘Mischief and Mayhem in da AM’ from 6am to 10am, Monday to Friday, and ‘The Press Box’ sports talk show on Sunday from 10am to 1pm on KISS FM 96.1. He also writes a sports column in The Tribune on Tuesday. Comments and questions to naughty@tribunemedia.net