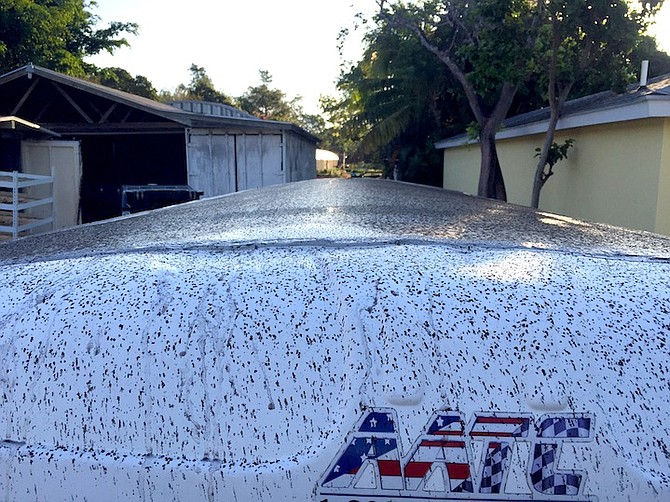 Oily residue on vehicles in the South Ocean area. 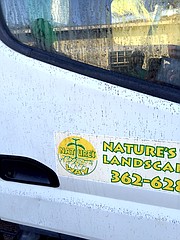 Oily residue on vehicles in the South Ocean area.

A LOCAL landscaping company is calling for heightened environment awareness of pollution from Bahamas Power and Light's (BPL) Clifton Pier plant after its entire facility was covered in soot.

Mark Thompson, of Nature's Way, said the plants, trucks and buildings on his five-acre plot at South Ocean were covered with a black greasy residue when he arrived on Friday morning.

He believes BPL's Clifton Pier plant is the culprit, pointing out that the change in wind direction had sent what appeared to be "black snow" inland rather than out to sea.

"I'm pretty sure it's the soot from the Clifton Pier plant because the wind was blowing from the west," Mr Thompson said. "Normally winds are from the east so it blows it out to the ocean. Now it's all over my property. It's residue from the exhaust and it's everywhere. It's a lot and when you wipe it it's greasy.

"I'm not talking about a little bit so you can imagine the volume that's daily going into the ocean. It's still all over the ground. It's all in the ponds that we have, with fish in them, the water lilies.

"This is another example of what's happening ecologically with BPL. In my mind it's a pretty big problem because it shows how much is being pushed out into the air from BPL. They are lucky it normally goes away from land but now it's all over the place like it snowed last night."

The electricity company has dispatched a team to investigate the complaint, according to BPL Commications Manager Arnette Ingraham, who said the company will conduct remediation if necessary.

The Clifton Pier Power Station been heavily scrutinised for a litany of pollution-related issues and is at the centre of a bid by the Coalition to Protect Clifton Bay, the environmental activist group, to obtain a Supreme Court injunction barring the Bahamas Electricity Corporation (BEC) from further oil-related discharges at Clifton Pier.

In Supreme Court documents obtained by Tribune Business, Bharti Jones, BEC’s safety and environment manager for New Providence, revealed that the corporation is currently dedicating $920,000 annually to the clean-up and mitigation efforts at Clifton Pier. Of this budget, some $500,000 covers labour costs, while $100,000 and $300,000 are allocated to materials and supplies, respectively. The $20,000 balance goes towards maintenance.

Lyford Cay residents who are breathing in this toxic stuff can't be too happy. The pollutants in the air usually can't be seen but are nevertheless there to be inhaled to one's own detriment! Clearly the power plant smoke stacks do not have functioning pollution arresting equipment installed. Ingesting these pollutants over the course of years is probably worse than being a cigarette pack a day smoker.

The Clifton Pier BEC power plant air pollution generally affects Andros more than Lyford Cay ........ but if this can be tied to the Bunker C fuel of BEC Clifton Pier old diesel engines ......... what will be the consequences????? ........ a new Power-Secure BPL power generation plant with clean energy technology???

This has been a problem ongoing for years!!

That plant nursery is the best on the island!! Mr. Thompson takes full pride and care in his business. So I know he must of been horrified.

It must of been terrible as we can see in the pictures.... Something has to be done immediately!!

We spent all day Friday cleaning this oil residue, washing plants , vehicles and ceramic pots etc. We were told a " team was dispatched " , but they must have gotten lost or stopped off at Carnival. Missing in action . Plenty more to clean should they show up, but not holding my breath.