Bahamian Sheds Light On Origins Of The Universe 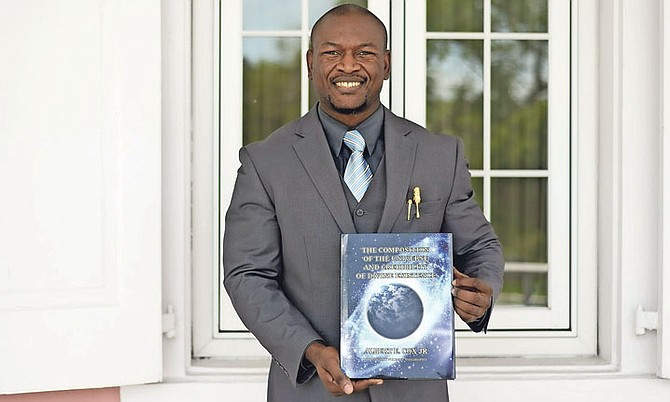 Albert Cox and his book, The Composition of the Universe and Credibility of Divine Existence. Photo: Shawn Hanna/Tribune Staff

ALBERT Cox Jr, the first Bahamian scholar to have his scientific research documenting the origins of the universe accepted, was recognised by the Governor General yesterday as he prepares for a worldwide promotional and educational tour next month.

Mr Cox’s philosophical theory ‘The Composition of the Universe and Credibility of Divine Existence’ has been endorsed by a number of international philosophers and scholars and comes as a result of arduous research over many years.

On the sidelines of his gift presentation to Dame Marguerite Pindling at Government House yesterday, the 32-year-old R M Bailey graduate described to The Tribune how his quest to understand the world around him propelled him to analyse the details of everything.

“I was on a quest, I wanted to understand my humanity and the origins of man,” Mr Cox said. “At the same time I had to grasp the concepts of everything and everyone - a need to understand the relation of us as people and our relation to the greater universe.”

He recalled that as a young child, he was always captivated and driven to find out more about the human understanding and their perception of the universe and divinity, a point endorsed by one of his ex-teachers, the former Senator Jacinta Higgs.

She told The Tribune that most of her interaction with Mr Cox left her “amazed” and often with more questions than answers. Mrs Higgs pleaded that the realisation of Mr Cox’s pursuit should now open the door for many other Bahamian youths to move away from the questions of ‘what if’ to commentaries of ‘what more’.

“He proves that that inkling to go further and think more can pay off,” Mrs Higgs said. “There were times he left me as a teacher wondering about if there was more to be obtained. Standing here at this moment, celebrating his successes, I now know that we have so much more as people we can give.”

The presentation and acceptance by the Governor General came in preparation for Mr Cox’s global tour to share aspects of his theories at various universities and institutions. Mr Cox leaves on June 16 and the two and a half week tour will include stops in England, Canada, Vienna, India and the United States. Mr Cox, who was a research student at St Mary’s University in Eastern and Western Philosophy and Theoretical Science, will also make a formal presentation to the Minister of Education on Monday.

This sounds interesting, I must read this

How can this be scientific if it's philosophical? While this is an amazing feat, there is a massive difference science and philosophy. Kinda like creationism vs evolution

It can be scientific in its methodology and philosophical in its articulation.