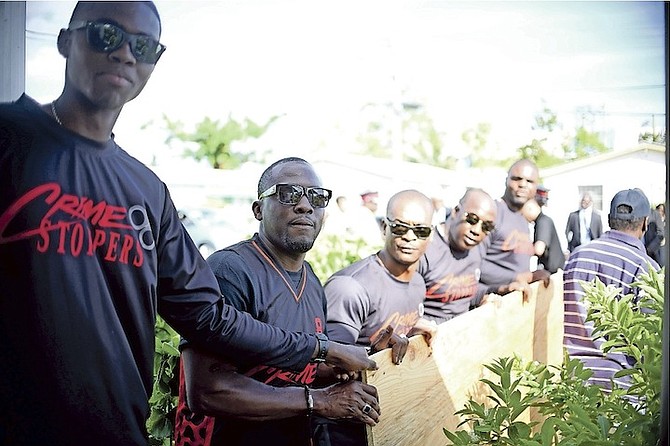 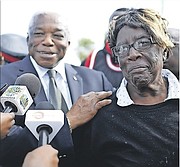 TWO women who lost their roofs during the passage of Hurricane Matthew last month were yesterday presented with $6,000 worth of supplies to “begin the process of rebuilding their lives,” according to Bain and Grants Town MP Dr Bernard Nottage.

The women, who both live in Dr Nottage’s constituency, burst into tears when they saw the truck full of plywood and shingles arrive at their respective homes.

Melvise Seymour, 74, had to be rescued from her home on Water Street off Tucker Road, when her roof collapsed and water started to pour into the structure. Ms Seymour, who has been staying with her nephew since the storm, said she is eager to get back into her own place.

“Thank you all very much, God bless you,” she said. “The water and the roof destroyed everything. The water was coming through the roof and under the door. The roof was damaged, the furniture damaged, the sheet rock damaged, the appliances damaged, everything damaged.”

Dr Nottage said he has known Ms Seymour for many years and she has never let him down and so he cannot let her down now.

“We came through 10 days ago and she waved me down and told me what happened. They had to rescue her out of the house during the hurricane. Her neighbour came and got her in the middle of the night and when she came back in the house she didn’t recognise it. But between Supt Rolle and I we will help her get her roof back on,” Dr Nottage said.

Nastasha Minnis, who lives on Dean Street, said after her aluminium roof fell off, everything in her home was destroyed by water. She said she has been sleeping in one small room in the home, with her three sons, that she managed to put a little bit of covering over.

“I am so thankful for them. I lost everything. There is nothing left. Nothing. I have been able to put canvass over one of the bedrooms in the back so I am sleeping there with my three other sons, who are 13-year-old twins and 15. It has been devastating. I can’t sleep because through the night you can hear people in the yard,” she said.

The items were purchased by the Royal Bahamas Police Force basketball team, the Crime Stoppers, who according to Assistant Superintendent Anthony Rolle, decided to forgo their usual celebration party and instead use the money to “help persons in need.”

ASP Rolle is the officer in charge of Bain and Grants Town Urban Renewal and head coach of the basketball team.

“A few days before the storm, the team won the championship in the Bahamas Government League. So it’s customary as the champions we visit with the commissioner of police and we have a party,” ASP Rolle said.

“In the aftermath of the storm there was a lot of devastation so instead of having a party the team said they will get together an make a donation toward a family that is deserving. We started an assessment in this community and that led us to the home of Ms Minnis who lost her roof as a result of the storm. It came without a doubt that we would use the funds to provide her with assistance.”

ASP Rolle said the team entered into a partnership with Dr Nottage; the team will provide the materials and Dr Nottage provides the labour.

“The day after the hurricane we came through Dean Street checking on the effects of the hurricane and her house was perhaps the worst that was affected. She lost her roof, she had a tin roof and it all flew off and when we were here she had a little stove and was trying to cook something for her kids,” Dr Nottage said.

“She is a nice person and she now has to figure out how to restore her home and deal with losing her son to murder two days after the hurricane. I want to thank these young men for giving up their fun to help us to bring some help to her and we will find a way to put this material on and quickly. “

Dr Nottage said work should begin on both homes before the end of the week.