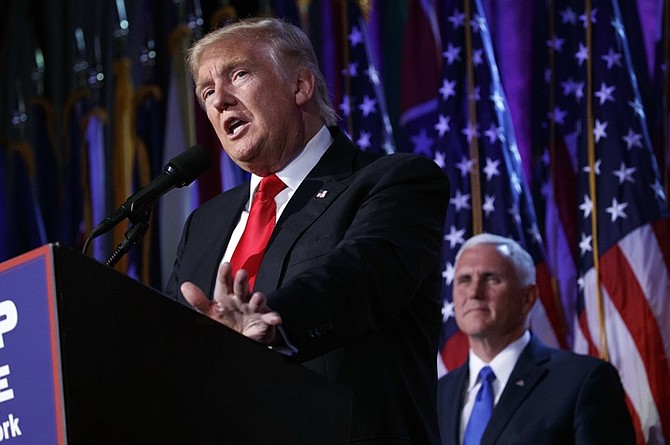 WASHINGTON (AP) — Donald Trump claimed his place Wednesday as America's 45th president, an astonishing victory for the celebrity businessman and political novice who capitalised on voters' economic anxieties, took advantage of racial tensions and overcame a string of sexual assault allegations on his way to the White House.

Trump's triumph over Hillary Clinton, not declared until well after midnight, will end eight years of Democratic dominance of the White House. He'll govern with Congress fully under Republican control and lead a country deeply divided by his rancorous campaign against Clinton. He faces fractures within his own party, too, given the numerous Republicans who either tepidly supported his nomination or never backed him at all.

As he claimed victory, Trump urged Americans to "come together as one united people."

Clinton, who hoped to become the nation's first female president, called her Republican rival to concede but did not plan to speak publicly until Wednesday morning.

President Barack Obama invited Trump to meet with him at the White House on Thursday to discuss transition, and the White House said the president planned to address the election results in a statement Wednesday. White House spokesman Josh Earnest said Obama called Trump to congratulate him and also called Clinton to convey his admiration for the "strong campaign she waged throughout the country."

The White House said Obama's televised statement Wednesday would focus on "what steps we can take as a country to come together after this hard-fought election season."

Trump, who spent much of the campaign urging his supporters on as they chanted "lock her up," said the nation owed Clinton "a major debt of gratitude" for her years of public service. Trump campaign manager Kellyanne Conway said Obama and Trump had "a very nice talk" when the president called to congratulate him in the early hours Wednesday.

The Republican blasted through Democrats' longstanding firewall, carrying Pennsylvania and Wisconsin, states that hadn't voted for a GOP presidential candidate since the 1980s. He needed to win nearly all of the competitive battleground states, and he did just that, including Florida, Ohio, North Carolina and others.

A New York real estate developer who lives in a sparkling Manhattan high-rise, Trump forged a striking connection with white, working class Americans who feel left behind in a changing economy and diversifying country. He cast immigration, both from Latin America and the Middle East, as the root of the problems plaguing many Americans and tapped into fears of terrorism emanating at home and abroad.

Senate control means Trump will have great leeway in appointing Supreme Court justices, which could mean a shift to the right that would last for decades.

Trump has pledged to usher in sweeping changes to U.S. foreign policy, including building a wall along the U.S.-Mexico border and suspending immigration from countries with terrorism ties. He's also praised Russian President Vladimir Putin and spoken of building a better relationship with Moscow, worrying some in his own party who fear he'll go easy on Putin's provocations.

Putin sent him a telegram of congratulations early Wednesday.

The Voters have spoken! America doesn't want a socialized society. We don't want government control. Welcome Trump! Now we have our America back.

What sweetens the mouth will bitter the belly. Person who voted for Mr: Trump will find out soon enough that promises are comforts to fools. He will bring to fruition very little of what he promised. including their famous wall.

Yes, promises are comfort to fools. But the Bahamian electorate has never learned that.

birdie you are so right. we are experiencing that right here at home from your beloved corrupt plp

Since Trump announced his plan to build a proper "wall" between the U.S. and Mexico, the value of the Mexican peso has depreciated 25% against the U.S. dollar with the peso reaching an all time low yesterday. The most recent annual trade deficit of the U.S. with Mexico totalled about $58 billion, thanks in large part to key terms of the North American Free Trade Agreement (NAFTA) favouring exports from Mexico to the U.S. over exports from the U.S. to Mexico. Applying basic math to these two simple facts shows that Trump's ascendance to the U.S. presidency will annually transfer roughly $14.5 billion of wealth from the coffers of Mexico to the coffers of the U.S., assuming the U.S. has similar levels of recurring annual trade deficits with Mexico in the early years of Trump's presidency, i.e. 25% of $58 billion equals $14.5 billion. In other words, Mexico will indeed be paying for President Trump's "wall" (and then a whole lot more) just by the mere fact that he has become the next U.S. president. I wonder if Mexico has figured all of this out yet.

Regardless 3 years, 4 months ago

As former owner of Resorts International on Paradise Island, President-Elect Trump knows all too well how The Bahamas operates politically. It will be an interesting four years ahead!

As one of the few "loyal" Trump supporters in The Bahamas, this is precisely the sort of jolt the US needed to right an otherwise sinking Ship.

The illustrious U.S. corporate media propaganda machine and the GOP's ongoing "dumbing down" of America are the primary reasons that Trump was selected. Remember, as has happened on more than one occasion recently, TRUMP DID NOT WIN THE POPULAR VOTE. The stone age electoriial college system strikes again! The media, because of Trumps unproven wealth (no tax returns to prove otherwise) gave Trump a free ride and billions of dollars worth of free advertising ti help him win that no other candidate could touch. The premise that Trump is a terrific businessman is bogus at best. Trump has filed for bankruptcy numerous times so as not to pay his bills makes this claim an absolute lie. Trump represents everything that America is not supposed to be about. Wants to build a wall to keep the Mexicans and other immigrants out. Wants to deport millions of immigrants at a cost of hundreds of millions of dollars (which will NEVER happen. Wants to get rid of "Obama care" but doesn't offer anything as a replacement. This will put millions of people back on the public dole for healthcare. This man is the consummate liar. Even when he is is on tape and video proving that he is a liar. He and his fellow GOPers consider women to be second class citizens and treat them as such. Calling women by the name of their genitalia is a real class act for a so called President. Trump is as much of a racist as any bigot can be. Trump and Russia's Putin apparently are an item which is another fact that is difficult to explain. America has finally gone around the bend and off the deep end and it is the American people who will suffer as a result. The Canadian immigration web site crashed on election night as so many Americans wanted to find out about immigrating to Canada. America faces an uncertain future and so does the rest of the world. This man "likes nuclear weapons" and wants to use them. Enough said! God help us all!