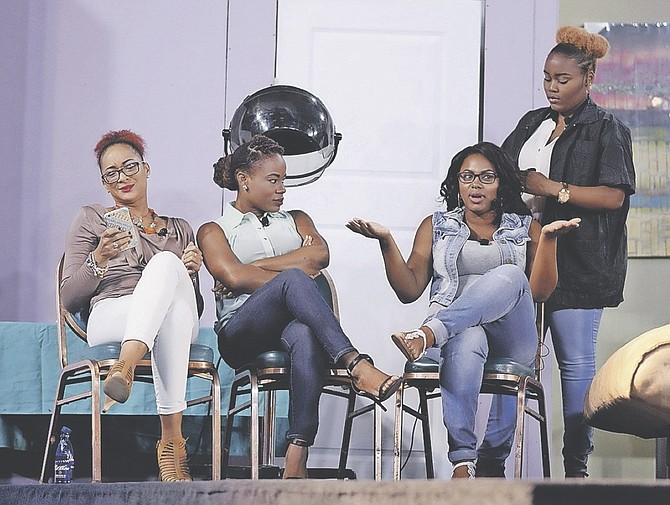 The cast of “The Good Girl’s Guide to Love and Romance” explore the intricacies of relationships in the modern world.

Friendship, love and the complexities of modern dating are the topics explored by the humourous play “The Good Girl’s Guide to Love and Romance” by author Davrielle Burrows.

Bahamians packed the Myles Munroe Diplomat Centre last Friday to enjoy the tale of four girlfriends who make a purity pact as children. A decade later, the four friends are vibrant, successful women, now faced with the realities of dating in the 21st century.

As they grapple with their traditional values and their desire for love, they question whether abstinence is really the best route to go.

As the playwright of the piece, Ms Burrows said it was exciting for her to see the audience respond to the material.

She wrote, directed and produced the play largely on her own, with the assistance of the Bahamas Faith Ministries, along with several private individuals, including Andre Culmer, Ranel Pierre, and Terrance McSweeney.

Ms Burrows described the process of preparing and rehearsing for the show as a “gruelling but rewarding” task. Setting out, she said she knew it was ambitious to produce a play like “The Good Girl’s Guide”, but thanks to a talented cast of 22 she was able to pull it off in the end – despite some setbacks and delays caused by Hurricane Matthew.

“I’m very pleased with how everything turned out. I love theatre. I’ve written two novels and turned one of them into a script for a mini series, but attending live shows is one of my favourite things to do. Earlier this year, when I started developing a new storyline concept I knew I wanted to produce it in a relatively short time span, and considering that along with a tight budget I knew I wanted to bring it to the stage,” she told Tribune Woman.

What Ms Burrows ultimately brought to stage last Friday was a story based on very own experiences of life and friendships.

Growing up in a very conservative environment, she said she and her friends all believed in waiting to engage in sexual activities until marriage.

As they got older, however, each of them started to question whether this was preventing them from finding happiness and developing deep connections because the landscape of dating had changed so drastically since their childhood.

Ms Burrows said the stage show is dear to her heart and the message is an important one for her on a personal level. And being able to get an honest conversation started about the important topic of sexuality and relationships was incredible, she said.

“I love to entertain, so creating an opportunity for people to have a good time, enjoy a special night out and have a few laughs is really satisfying. I’m a storyteller, that is a gift God has given me, and I consider it a privilege to be able to do that well. I wanted people to come and hear a story. Not to necessarily make them believe like me, but to simply give an honest expression of what modern dating and life looks like for people like me. I wanted to encourage people and let them know that they’re not alone and encourage others to just stay true to who they are. Most importantly though, I really wanted people to come out and  enjoy the show, and I think we accomplished that.”

Glad to see your self respect at such a young age. Many of us don't learn that until later in life. We learn it the hard way, enjoyed reading your article.