Two accused of killing teen as he played dominoes 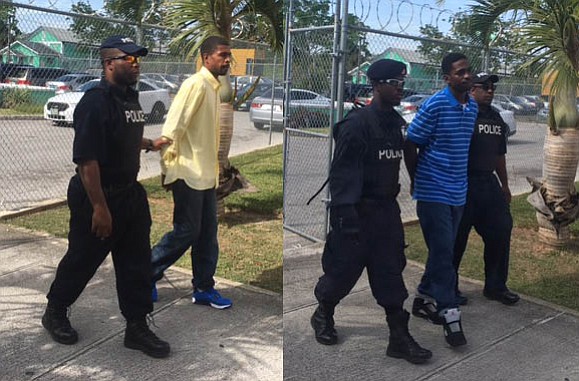 TWO men were remanded to prison yesterday after they were arraigned in connection with the killing of a teenager who was gunned down during a game of dominoes.

They were charged with murder under Section 291 (1)(B) of the Penal Code, which does not attract the discretionary death penalty if a conviction is reached at the end of the trial in Supreme Court.

It is alleged that they intentionally, and by means of unlawful harm, caused the death of McKenzie.

It is further alleged that they attempted to cause the deaths of Ashward Hanna, Anwar Lightbourne, Shayne Reckley, Deiago Arnette and Dominic McKinney.

The 17-year-old, and the other intended victims, were in the driveway of a home on Sunset Way playing a game of dominoes when the occupants of a champagne coloured Honda Accord armed with firearms pulled up and fired several shots at them before speeding off.

McKenzie was pronounced dead at the scene and the others were taken to hospital to be treated for their injuries.

Storr and Hanna were told by Magistrate Delancy that they would not be required to enter a plea to the allegations until they are formally charged before a judge in the Supreme Court.

They are scheduled to return before her on January 17, 2017 to be presented with a voluntary bill of indictment that would transfer the matter to the higher court.

Because of the nature of the charges, they were denied bail and remanded to the Department of Correctional Services in the interim.

However, they can apply for a bond in the Supreme Court ahead of trial.