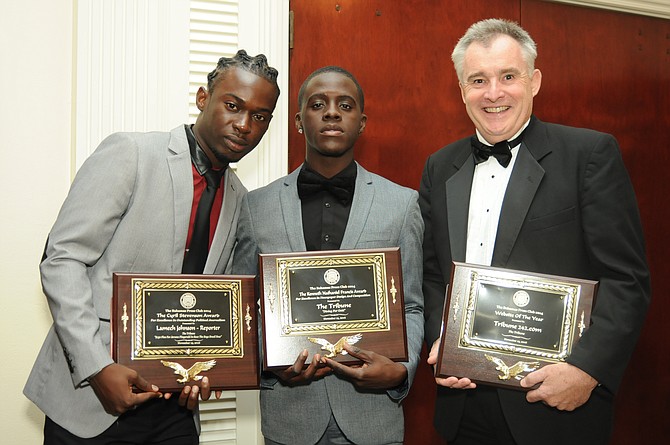 From left, Lamech Johnson holding his award for political journalism, photographer Shawn Hanna holding the award won by The Tribune for newspaper design, and managing editor David Chappell with the award for website of the year. Photo: Franklyn Ferguson

THE Tribune picked up three prizes as the best in Bahamian media was recognised at the Bahamas Press Club second annual Media Awards at the British Colonial Hilton on Saturday night.

Nine awards were handed out during the ceremony hosted by journalist, lawyer and talk show host Jeffrey Lloyd while P J Patterson, the former Prime Minister of Jamaica, delivered the keynote addresss, “A Responsible Press”, during which he highlighted the hallmarks of journalism including ethics, accountability, integrity and not only getting the news first, but getting it right.

Tribune staff reporter Lamech Johnson was recognised with the outstanding political journalism award for his story “$150,000 fine for Jerome Fitzgerald in Save The Bays email row”. The newspaper also won best website of the year and the newspaper design award for its front page “Diving for Gold” depicting Shaunae Miller’s Olympic 400m triumph in Brazil in the summer.

The Sir Etienne Dupuch Lifetime Achievement Award went to Calsey Johnson, the former broadcast journalist and chairman of the Broadcasting Corporation of the Bahamas (ZNS) and now Bahamas High Commissioner to Canada.

President of The Bahamas Press Club Anthony Newbold congratulated the winners for their hard work and also encouraged other members of the media in the country to “get involved” in building the organisation.

The Sir Etienne Dupuch Lifetime Achievement Award - named after the long time Editor and Publisher of The Tribune - went to Calsey Johnson, the former broadcast journalist and chairman of the Broadcasting Corporation of the Bahamas (ZNS) and now Bahamas High Commissioner to Canada.

The award winners were:

The Kenneth Nathaniel Francis Award for Newspaper Design and Composition: The Tribune: “Diving For Gold”

The Leslie Higgs Feature Writer of the Year Award: Journalist/writer Tosheena Robinson-Blair “The Life and Times of a Master Hotelier”.

The Bursell Bradshaw Press Photograph of the Year Award: Ahvia Campbell, photojournalist, The Nassau Guardian for “After The Storm”

The Best television Documentary: Karissma Robinson & Andrew Burrows, ZNS for “The Underneath: Transgenders in The Bahamas”.

The Cyril Stevenson Award for Outstanding Political Journalism: Lamech Johnson, The Tribune for “$150,000 fine for Jerome Fitzgerald in Save The Bays email row”.