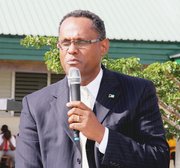 GRAND Bahama residents, particularly those in low-lying areas, are advised to “take heed” as Hurricane Matthew moves into the northwest Bahamas later this week.

A disaster preparedness meeting was called at the Ministry for Grand Bahama on Monday for all relevant public and private stakeholders, including island administrators, NEMA officials, government agency heads, the Grand Bahama Disaster Preparedness Committee, The Red Cross, the Royal Bahamas Police and Defence Forces and the Grand Bahama Power Company.

“I am appealing to all residents, especially those in low-lying areas of East and West Grand Bahama to take heed, as storm surges and coastal erosion and flash flooding are expected during this hurricane,” he said.

Matthew, a category four storm, was packing winds near 140 mph with higher gusts.

The northwest Bahamas is under hurricane alert, with storm conditions expected to be felt within 60 hours.

On Monday, residents were out at the various hardware stores on purchasing hurricane supplies and getting ready for the storm. Some homeowners have also started getting their homes prepared, by installing their window shutters.

Dr Darville said that storms are unpredictable and can change at a moment’s notice and urged all Grand Bahamians to be prepared.

“We have already witnessed this in the past with other hurricanes,” he said.

The minister said that NEMA and the Grand Bahama Disaster Preparedness Committee have been in a state of readiness should any storm affect our region.

During an emergency disaster meeting earlier, the Ministry for Grand Bahama, in conjunction with NEMA and the Grand Bahama Disaster Committee finalised all plans and completed the logistic protocols in preparation for the passage of Hurricane Matthew.

Dr Darville said “all relevant stakeholders were a part of this meeting and we are now ready to execute our emergency plans should the need arise.”

Residents are encouraged to secure their property and personal documents, medication and other necessary items, and are advised to follow the Ministry for Grand Bahama’s Facebook page for further updates, as well as the national radio and television station.

The minister addressed some of the misinformation regarding the storm and school closure on Grand Bahama that is spreading on social media.

“It was pointed out that all schools on Grand Bahama remained open on Monday. Schools affected by closure were those in the south-eastern Bahamas on Monday and those in the central Bahamas on Tuesday.”

All schools will be closed on Wednesday.