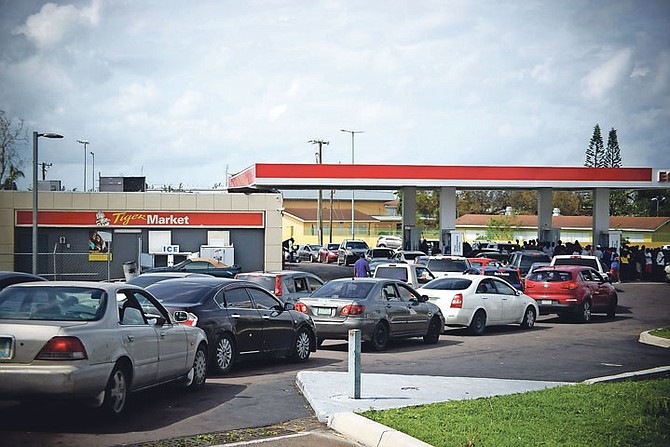 SIR Franklyn Wilson yesterday urged Bahamians to “stop panicking” over a non-existent fuel shortage, disclosing that his company was offloading 700,000 gallons from a newly-arrived tanker.

“Please be advised that a ship with hundreds of thousands of gallons of fuel arrived at Clifton this morning for Sun Oil,” Sir Franklyn wrote in an e-mail to The Tribune and others. “Spreading of the word of this reality may assist in the restoration of normalcy in the purchasing of fuel.”

Sir Franklyn confirmed to The Tribune that the tanker had brought 700,000 gallons to New Providence, and was being offloaded yesterday afternoon. He added that Shell/FOCOL Holdings were planning to upload pictures of the vessel to their Facebook page, in a bid to halt a two-day stampede that has caused gridlock at gas stations across New Providence, coupled with long queues and traffic jams on the roads.

“There is genuinely no need for panic,” Sir Franklyn said. “What we’re doing with this panic is in no one’s interests, and I would encourage all involved to stop it. It doesn’t matter whether it’s diesel, gasoline or propane. There is no shortage of supply. There are challenges to get the fuel from where it is to where we want it to be.”

Sir Franklyn said Bahamians seemed to have assumed “there will be no fuel in town for a long time” as a result of seeing pictures of the destroyed Clifton jetty where supplies are typically unloaded from tankers.

Emphasising that the three oil majors - Shell (FOCOL/Sun Oil), Rubis and Esso (Sol Petroleum) - may all be experiencing different issues in Hurricane Matthew’s aftermath, Sir Franklyn pleaded with Bahamians to allow them more time to resolve the problems.

In Sun Oil’s case, he explained that the problems were located at its storage facility and fuel loading platform, where both the generator and its back-up had failed as a result of the storm.

“You put in two to address the risk, and both are compromised,” Sir Franklyn explained. “As a result of that, it meant we could not load and re-load the delivery vehicles through the normal methods. We have had to do it using manual methods.”

This, in turn, has increased the time required for Sun Oil to get product to its service stations and meet the skyrocketing demand.

Sir Franklyn said Sun Oil was hoping to restore power to its loading bay by late yesterday afternoon, and praised the company’s staff for “yeoman’s work” in meeting all the pressures imposed upon them by Hurricane Matthew.

He also revealed how Sun Oil had worked with other businesses to keep them supplied with fuel, and ensure they could operate following Matthew’s passage.

Sir Franklyn explained how SuperValue owner, Rupert Roberts, had found a driver with a 1,000 gallon truck that was able to drive between all the chain’s stores and Sun Oil, constantly reloading to keep the supermarkets operational.

He added that Sun Oil had also been “topping up the fire trucks” with gasoline until 9pm at night.

Some people really shouldn't be allowed access to whatsapp.