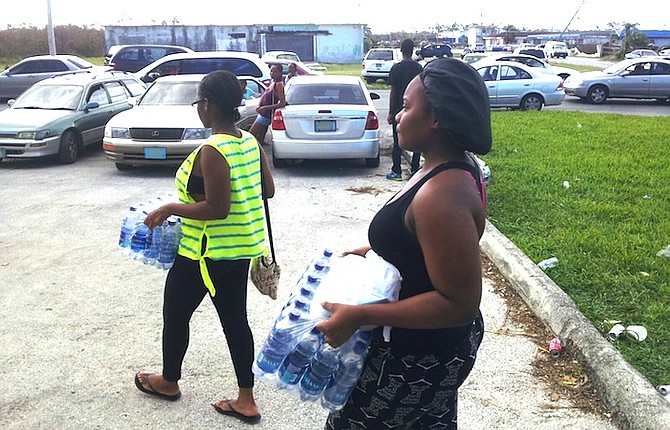 Residents line up at Coca Cola in Grand Bahama.

COCA-COLA distributed 1,500 cases of water and food care packages to residents on Grand Bahama in support of hurricane relief efforts on Friday morning.

Many residents gathered at Coca-Cola on Yellow Pine Street, Freeport, from 9am because of the great demand for water and ice on the island.

Karla Wells Lisgaris, Marketing Brand Manager with the Carribean Bottling Company (CBC), the local distributors of Coca-Cola, said that Coca-Cola is committed to giving back to the community and responding in times of disaster when there is a need.

“We wanted to help the community that we operate in and we are providing 1,500 cases of water, one per household, along with a food package,” she said.

Mrs Lisgaris said the food was donated to Coca-Cola by Lightbourne’s Trading, Island Wholesale Variety and Purity Bakery. “What we have been given we are trying to make it stretch to match to 1,500 cases so that everyone can get one case of water and one food care package,” she explained.

Helping people in need during times of crisis is something that Coca-Cola and CBC supports, Mrs Lisgaris said. “Coca Cola globally believes in giving back to the communities in which they operate and so does Caribbean Bottling. So we get support from the international side and locally and we feel it is very important that our consumers know we appreciate them, and when they have a need we have to respond to it.

“Freeport obviously got damaged pretty badly, and so did Andros. We sent product to Andros and donated product in Nassau to residents of South Beach, Marshall Road, Coral Harbour and all those communities that got a lot of water damage. For us, the Bahamas is our community and when we can respond we have to respond,” Mrs Lisgaris said.

Residents said they were very grateful to Coca-Cola for responding to their needs. “I think it is a very nice thing that they are doing by giving back to the community,” said one woman. “I had a little damage at my home, but I will survive and but my workplace did not fare well. But this too shall pass.”

A man who was also queueing said: “I think they are doing a splendid job and at least people can get water and something to eat. This is a great gesture on their part.”

The Red Cross was also distributing ice to residents.

And to think Coca-Cola have done this at a time when the Christie administration is seriously considering introducing a significant "sugar tax" on unhealthy drinks and beverages sold in the Bahamas that are causing an explosive increase in the rates of childhood and adult obesity resulting in soaring incidences of type II diabetes, high blood pressure, tooth decay, etc., all of which are taking an extremely costly toll on the healthcare costs of our small nation.

That is why they do this. Carbonated corn syrup drinks, like coke, are the tobacco of the 21st century. If they were really charitable, it wouldn't look like a publicity event; which it is. Why call the media to be charitable? The 3000 bucks it cost them to make this water will come out of the marketing budget and be worth many times that.

Coca-Cola's token gesture here in distributing water is appreciated of course, but our government should nevertheless proceed with its plans to introduce a special sin tax on all of the so called "sugar-loaded drinks", whether produced locally or imported. The special sin tax on such drinks should be set at a rate equal to or greater than the sin tax rate levied on cigarettes. It also should be in addition to any other duties, excise taxes, VAT, etc. that currently apply to these unhealthy addictive sugar-loaded products. Most of us know that consuming too much candy, too much ice-cream or too much of most other high sugar content products is bad for our health. But the producers of these other sugar-loaded products differ from the likes of Coca-Cola in that they do not aggressively and callously target their unheathy and highly addictive products at our children and young adults. Our Minister of Health (Gomez) should be pressing for this new special sin tax to be implemented at the earliest possible time!

Tell that to all the children worldwide who are suffering from obesity because of the many billions of dollars Coca-Cola spends annually to slickly market their poisonous sugar loaded products to the more innocent and young among us.

No but we do have to pay for the health care of those who do. In a heavily taxed environment, with a good public health care system, you would be up in arms at the cost.