Atkins, Barry And Cleare Enshrined In The Hall Of Fame 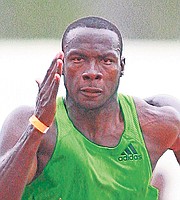 Trevor Barry in action in Beijing.

A TRIO of Bahamians were inducted into the Athletic Hall of Fame of their alma mater for outstanding collegiate careers on the track and in the field.

Barry, the only member of the trio still active in competition, recently finished 11th overall in the high jump at the Rio 2016 Olympics.

A 2006 graduate, Barry’s list of accolades with the Blue Hawks included setting the school’s high jump and long jump records as a senior. He is a 14-time conference champion and an eight time national champion in both aforementioned jumps. He was also named the most outstanding indoor athlete in 2006 and was a member of the three-time national champion track team.

Barry, 33, is entering his fourth season as an assistant track and field coach at North Dakota State University where he directs students in the high jump, long jump and triple jump.

Locally, a former student of Aquinas College, he is son of Queenie and Charles Barry and was the youngest of five children.

Atkins, 32, is the Bahamian 100m national record holder, and the only Bahamian to run legally under 10 seconds.

The highlight of his career came in in 2007 in Osaka, Japan, where he clocked an astonishing 9.91 seconds for the Bahamas’ national record and the silver medal at the IAAF World Championships behind American Tyson Gay and ahead of race favourite, Asafa Powell of Jamaica.

At Dickinson State, he excelled in the both indoor and outdoor for all for years.

He has indoor and outdoor conference sprint records that are still standing, and he led his team to four Dakota Athletic Conference championships.

In addition, he is an eight-time All-American in the sprints and relays. Atkins led Dickinson State to two consecutive national championships in 2004 and 2005 and to a runner-up finish in 2003

Atkins officially announced his retirement last June and currently serves as an assistant coach working with the sprints and relays for the Kennesaw State Owls in Kennesaw, Georgia.

Cleare, the former quartermiler, was also an NAIA Hall of Fame inductee.

Cleare is currently a behavioural interventionist at Sheridan Jr. High in Sheridan, Wyoming, and he has worked with special needs students for the past two years.