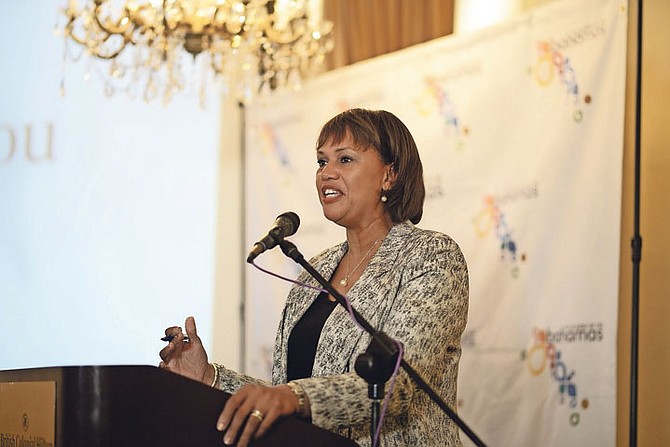 GOVERNMENT officials are working to “arrest” the Zika virus situation in order to avoid a level three travel alert from the US Centres for Disease Control and Prevention, with a senior tourism official suggesting that such an advisory could have a damning affect on the country’s tourism offering.

Recently, the CDC issued a level two travel advisory for persons visiting The Bahamas due to the presence of the feared virus in this country.

During a Zika information session for tourism stakeholders, Director of Tourism Joy Jibrilu said officials are seeking to “arrest the situation” in order to “keep fear at bay” regarding the virus.

However, she said it is “still too early” to tell if the eight confirmed cases of Zika in New Providence has had or will have any impact on travel bookings to The Bahamas.

“We have a complete picture of what we’re up against from a tourism standpoint,” Mrs Jibrilu told a meeting at the British Colonial Hilton yesterday. “Ensuring that we arrest the situation so that we either go back down to watch level one or remain where we are for the moment. I am sure that we can imagine how the worst-case scenario can roll out. It is important that we stay focused and keep fear at bay.”

A level three alert, the highest advisory the CDC can issue for international travellers, means the destination in question is a “high risk” to travellers who should avoid non-essential travel to the area.

The lowest warning is a level one advisory, that means travellers should follow “usual precautions” when travelling to that particular destination.

As of August 23, the CDC had issued a level two alert for The Bahamas.

Additionally, the Public Health Agency of Canada has issued a travel health notice for its citizens, recommending that Canadians practice “special health precautions” while travelling to affected countries, and those pregnant or considering becoming pregnant should avoid travel here.

Mrs Jibrilu said the country “remains a safe zone where all stops have been pulled out to curtail the spread of the Zika virus.”

This, Mrs Jibrilu said, has been made possible because of The Bahamas mounting a “united campaign” of Zika prevention across all related government ministries and private sector entities, inclusive of the Ministry of Health, the Department of Environmental Health Services (DEHS), and the Bahamas Hotel & Tourism Association (BHTA).

“In The Bahamas, we have no illusions,” Mrs Jibrilu said. “When it comes to the management of threats to public health, we must do so with transparency and openness. We are keenly aware of our status with regard to Zika and what the implications are for our destination, a destination that is heavily dependent on tourism.”

The Bahamas reported an initial case of the virus on August 10 in a man who had recently travelled to Jamaica. The man is a resident of Pinewood Gardens, officials have said.

Last week, Minister of Health Dr Perry Gomez reported that there were eight confirmed Zika cases in New Providence. Additionally, there are some 83 suspected cases still under investigation by local health officials. On Thursday, Dr Gomez said he was waiting for key ministry officials to return from their vacations before giving an update on the virus.

The virus is primarily transmitted through mosquito bites.

However, due to the risk of the virus being spread sexually, health officials have recommended the use of condoms, with a special warning being given to pregnant women to use protection while having sex or not engage in sex at all during pregnancy.

Last month, Tourism Minister Obie Wilchcombe said his ministry has ramped up its marketing machinery to convey the message that The Bahamas is doing all it can to guard against the spread of the virus.

"Wurtless Doc" Gomez, "Fruity Tart" Wilchcombe and "I like my name" Jibrilu just don't get it! They are nearly two years too late in addressing the menacing outbreak of the Zika virus in the Bahamas. Moreover, our friends of another era, the traveling U.S. public and the U.S. government, are now seizing every opportunity to "stick it" to the Bahamas today, and by extension "stick it" to the ill-gotten investments in the Bahamas of Christie's new found mainland Chinese friends. Welcome Bahamians to the real world of geo politics where you reap what you sow all too quickly!

Oh yes. Let's sort the damned mosquitoes right out. That will cause a travel advisory. What about the flipping crime. Been going on for years and you can't even start on it. Couple mosquitoes and yall acting like you ga get uhm like Rambo. Too damn fool.

I am no expert but is increased spraying of insecticide in densely populated areas the right approach to combating Zika? Especially since some experts believe the chemicals used to eradicate the mosquitos that carry Zika may be more dangerous than the virus itself and may contribute to birth deformities. Data also indicates that the mosquitos that carry the virus do not travel far distances so should this be taken into consideration when planning strategy to combat Zika?

I am no expert but is increased spraying of insecticide in densely populated areas the right approach to combating Zika? Especially since some experts believe the chemicals used to eradicate the mosquitos that carry Zika may be more dangerous than the virus itself and may contribute to birth deformities. Data also indicates that the mosquitos that carry the virus do not travel far distances so should this be taken into consideration when planning strategy to combat Zika?