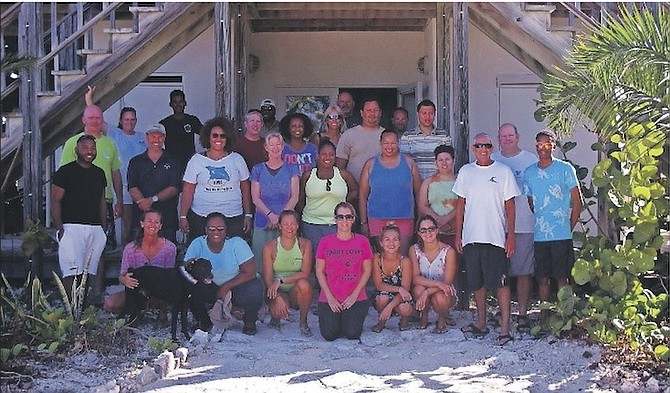 AN international partnership aimed at reversing the decline of coral reefs in the Bahamian archipelago has been launched at a science workshop in Rock Sound, Eleuthera.

Representatives from 15 conservation groups - including the Bahamas National Trust (BNT) and the Perry Institute of Marine Science - took part in the one-week workshop held at the Cape Eleuthera Institute last month.

The project and workshop partner is SECORE International, working for worldwide coral reef conservation through research, education, outreach and restoration, which has developed methods for sexual coral reproduction and is working towards large-scale applications.

Tropical coral reefs are the most diverse marine ecosystems on earth, supporting human livellihoods through fishing and tourism. Corals are the tiny animals that build the reef structure and provide the basis for a functioning reef ecosystem.

The Bahamas has more coral reef area than any other nation in the region, as well as one of the world’s largest contiguous reefs off the east coast of Andros. The marine environment plays a critical role in supporting the Bahamian way of life and the country’s main industry - tourism.

According to Dr Craig Dahlgren, director of the Perry Institute and a science advisor to the BNT, “Bahamian reefs are in decline due to a range of impacts, including pollution and warmer temperatues. Marine protected areas coupled with coral rehabilitation can help them to recover.”

The Eleuthera workshop combined background lectures with hands-on field training. “The workshop is an important step to start training local partners so they can use coral restoration as a tool for their management efforts,” explained Dr Dirk Petersen, SECORE’s executive director. “The aim is to raise sexually produced coral offspring for restoration efforts.”

Workshop participants were able to observe the spawning of stands of endangered Elkhorn coral on South Eleuthera’s reefs. Some of this coral spawn was collected with special nets, fertilised in the lab, and the resulting larvae were cultured in Cape Eleuthera Institute facilities.

“Seeing this endangered coral spawn gives me hope for the recovery of Bahamian reefs” Dr Dahlgren said, “but we will need to help in that recovery by creating marine reserves and strategically rehabilitating reefs.”

Coral larvae are initially planktonic, meaning they float in the water column. They eventually sink to the seafloor to form new coral polyps. Where to settle is a crucial lifetime choice and the larvae can detect clues from their environment.

“The tiny polyps on the seafloor are easily smothered by algae,” Dr Petersen said. “And many Bahamian reefs have shifted to algal-dominated habitats. We saw thick algal mats at all the sites we dove. To reverse this phase shift will be the greatest challenge to reverse the decline of Bahamian reefs.

“We can help to increase coral recruitment by introducing large numbers of cultured coral settlers. However, this restoration will be successful only if additional action is taken. Restoration of important algal grazers such as the long-spines sea urchin (Diadema) and intensive management and expansion of marine protected areas will be key,” he said.

The participating organisations will undertake night diving this month to get an idea of spawning times for many reef-building species.

“We will then start restoration efforts next year at one or two locations, and plan to expand to more sites as the project develops,” Dr Peterson said.

The workshop also trained participants in reef assessment methods, including benthic surveying and coral methodology. Information on the status of Bahamian reefs is needed to plan marine reserves and identify suitable restoration sites. The trainees were able to survey eight sites off Eleuthera under the guidance of Dr Dahlgren and BNT Senior Science Officer Lindy Knowles.