Bahamian Men Asked To Speak Up At Upcoming Seminar 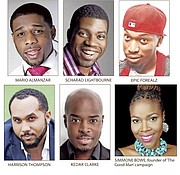 Misunderstandings between the sexes have existed since the beginning of time. Men say they don’t understand women, and women say some men are like a convoluted 500-piece jigsaw puzzle, requiring a lot of time an energy to figure out.

But instead of going to the source – the man himself – to help solve the riddle, many women rely on unqualified sources for their information (mostly their girlfriends) to help give insight into what it means to be a man, the experiences of men and their thought process when it comes to dating and relationships.

Breaking through these barriers in communication is the goal of the “The Good Man” campaign launched by motivational speaker Simmone Bowe.

The campaign, she explained, is one that promotes the support, understanding and respect of men, while also inspiring positive relationships between men and women.

Next up on the agenda is the new instalment of the “#MenSpeak” event. The theme is “Expressions & Confessions: From the Heart of a Man”, and will focus on the ways men express themselves through the arts especially.

The event will be held at the Meliá Nassau Beach Resort on October 1 at 8.30pm, with an after party immediately following. The emerging personal development organisation called Dream Life will be hosting a training seminar prior at 6pm.

“The events are always social in nature where we include entertainment and opportunities to mix and mingle before or afterward,” said Ms Bowe. “This month’s entertainment includes a comedy set by Naughty, comedian and radio personality; spoken word by US-based poet and speaker Adrian ‘Lovebook’ Carter, for his second appearance at #MenSpeak, and a live magic show by Edwourral Daxon, local magician.”

“People should attend the event because it is very informative and eye-opening, especially for women. And it gives men an outlet of support where they can safely share how they feel. It is really good for people who are dating, want to date, are in relationships, or people who just want to understand how each gender thinks so they can relate better even in other social settings like work, church and society,” she told Tribune Woman.

Through hosting events under the umbrella of her Recharge Empowerment Group, which was originally just for women, Ms Bowe said she was able to learn how men think and what they want.

“It focused on inner healing, empowerment, personal transformation, and the pursuit of purpose. As a result of conversations with women and their experiences with relationships, it caused me to listen more to men and ask intentional questions about how they felt about life, love, parenting, marriage, and relationships,” she said.

“It was shocking to hear what men had to say. Many men felt that they were disrespected, neglected, abused, not listened to, and misunderstood. They felt the scales were tipped in favour of women and women’s empowerment, but that men were being disempowered as a result. They felt that the same needs women have in relationships they want too, but were not given the same kind of attention. Mainly, women didn’t believe them when they shared their innermost thoughts and desires. Consequently, it caused them to shut down and not talk or to find solace in other activities or people to avoid drama.”

A number of events have already been held as part of The Good Man campaign and more are to come, said Ms Bowe.

“We began by having a male panel at our women’s empowerment social, which was well received, with great insights and dialogue between men and women in the audience and the panellists. Since then, we have had three #MenSpeak conversation social events that feature only the male panel or a combination of a male and female panel – #WomenSpeak – each with a different theme each month in an intimate, engaging forum. We have discussed the definition of a ‘good man’, what women misunderstand about men, what men find attractive in women, what are men’s rights in the Bahamas, can single fathers men raise daughters, etcetera,” she said.

“The response overall has been really positive. Many women who attend said they were glad that they did because it completely changed how they thought about men and how men really think. Men enjoy it because they can finally say things they always wanted to say or have been saying but the women around them won’t listen. We hope that more people would get involved so that the conversation would continue past the events and spill over into our homes, schools, workplaces and society at large, so we can see more positive change among men and women of all ages.”

Ms Bowe said they have begun taping interviews for a documentary and are looking to conduct formal research about how men and women are socialised in the Bahamas, how it affects relationships, parenting, roles and responsibilities and societal expectations, especially from a male perspective.

In December, #MenSpeak will features an elegant, intimate dinner and fashion experience called “Dinner, Dancing & Dating”. The event is a night for foodies featuring local chefs, entertainers and conversation around the dinner table.

“Our events always seek to highlight men with a message and men who are progressive in their careers, businesses and communities,” she said.