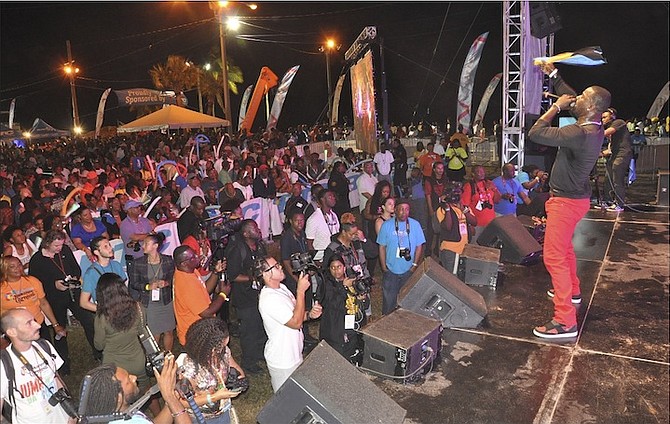 CARNIVAL BY THE NUMBERS

In April, BNFC Chairman Paul Major said the government would spend about $7m to host the festival.

The event attracted $1.2m in sponsorship while ticket sales and ‘other revenue’ accounted for $578,342.

Last year, the government spent $11.3m on the inaugural festival, going over its initial budget of $9m, with the total cost of the first carnival $12.9m, with the rest covered by sponsors.

The BNFC will hold a press conference today to discuss the economic impact of Junkanoo Carnival. However, in a statement in newspapers today, BNFC highlights reductions in total expenses and the government’s subsidy, while hailing increases in air arrivals, attendees, employment and involvement by small and medium enterprises (SMEs) throughout the country.

Referring to its impact on the tourism economy as a “substantive improvement,” officials estimated a 56 per cent increase in tourism related economic activity such as hotel room revenue, stopover and cruise passenger expenditures.

Further, the BNFC said despite a down month for international arrivals in Grand Bahama, arrivals for the festival’s kickoff weekend on the island were up by roughly 65 per cent.

Tourist arrivals in Nassau for the event were also said to be up by 11.5 per cent, an increase in the monthly year-over-year average for May.

According to the BNFC, the festival in its second year, continued to succeed against its mandate of stimulating economic opportunities for SMEs in the creative sector and positively impacting the national GDP.

Officials estimated that some 278 small and medium businesses and 696 individuals benefited directly from the expenditures related to the annual festival, 85 per cent of which was spent locally with suppliers across a myriad of sectors.

The committee indicated that it was able to “realise significant cost savings” in year two of the festival by bringing a more strategic focus to the event and implementing several key recommendations made after the inaugural festival.

These moves are said to have reduced government subsidies by an estimated $5 million - about 38 per cent less than 2015.

Officials said that 675 Bahamian solo artists, bands, entertainers and Junkanooers were employed through the festival.

“Of the total budget spent on Bahamas Junkanoo Carnival, the majority was invested in the music brand pillar for the event, which included the Music Masters Song Competition and the various nightly concerts,” the BNFC said.

“The culture brand pillar received the second largest investment, which included the Cultural Village, and related cultural demonstrations, exhibits and performances. The vibes brand pillar, which speaks to the Road Fever parade, accounted for the smallest investment of the three brand pillars.

It continued: “The Music Masters Song Competition was expanded in several positive ways, including the introduction of an artist development workshop with Sony Music Entertainment. Each contestant was also able to produce a music video this year during the artist development boot camp. The totally indigenous ‘Junkamania’ event more than doubled in the number of bands that participated, particularly among school bands, which is very encouraging because it preserves the culture for future generations.”

Moreover, the Road Fever event was also credited as a major stimulant for business along its route.

“The Road Fever event, which grew by leaps and bounds, was particularly a boon for casual vendors, who engaged in commerce along the route. One vendor sold ice from the back of a truck on the highway to passing groups in need of refills for their bars. Another vendor had a (moving) conch salad truck that travelled along the route with a major group to provide sustenance to revellers.

“Businesses such as Bamboo Shack and KFC along the route sold out of stock due to the high demand. Even gas stations saw a boost in confectionery and soft drink trade. The route change, which incorporated more of the inner city, gave residents easier access to spectating as the event literally went past their door steps.”

Ahead of the 2016 cycle of events, the Road Fever parade was privatised, reducing the commission’s financial obligation to the event to a minimal level - prize money.

The statement also noted the return of the festival’s title sponsor, BTC, for a second consecutive year with an investment of $650,000 in cash sponsorship and $350,000 in kind.

Other sponsors identified included Commonwealth Brewery, another founding sponsor, and Atlantis, Super Clubs Breezes, Bank of the Bahamas and Cash and Go, however sponsorship amounts by these companies were not given.

Apart from the financial specifics provided by the BNFC, the commission adopted and presented aspects of a study conducted by the College of the Bahamas.

Guided by Dr Nicolette Bethel and a team of students, the study identified that the average likelihood to recommend the Bahamas Junkanoo Carnival to others grew positively in 2016 from 6.99 to 7.91, on a scale of one to ten.

The study also indicated that 56 per cent of those attending in Nassau rated the event “very good” or “excellent.”

Additionally, 57 per cent of those attending thought the event provided a great deal of value or a lot of value for its cost, with 87 per cent of respondents feeling safe within confines of the event.

Further, the study concluded that an overall average expenditure per person for the event was around $111.02.

The government budgeted $9 million for the inaugural Junkanoo Carnival, but due to cost overruns and other failures on the part of the commission, that spending ballooned to $11.3m. Last year, the government reaped $8.3m in combined direct and tax revenues, with the latter providing $6.7 million of that sum.

As a result, government officials and those attached to the festival made it a point to keep this year’s carnival on budget.

Where in the world a government spend 10 million dollars on a carnival ... Most carnival are finance with private sponsors. Only in the Bahamas.

In the frequently used words of Jerome Fitzgerald, "I am not surprised." Junkanoo Carnival 2017 will be funded by the government again to disguise the PLP election campaign with international acts paid to plug the PLP.

Carnival is just one big criminal undertaking to raid the public treasury!!

Comrades! The next time anyone tells you that a tiny group of islands nation, shouldn't taken $10 million unauthorized by parliament to pull off the "Greatest Littlest Kanaval 2016 Flop On Earth"..... maybe you might want drive them over to introduce them to Paul Major and while they is there , have they picture taken with Paul. They can asks Paul to be a good $10 million sport to slip on one them Trinidadian designed costumes that only Bahamaland's taxpayers seem to be paying for.
I keep reminding Tribune reporters to go ask for Paul Major gto proved them with copies them "fancy outhouse toilets" Kanaval 2015 architectural plans commissioned and drawn to build?
I ain't telling no lie. Them fancy toilet drawings does exists and they is fancy, bad ass unconscionable waste taxpayers moneys drawings and in full colors....yet the public has never seen them. Why not, Paul Major?

Wow. Over 20 million wasted on carnival to date...

And the PLP talk about FNM spending?!?!?!

Forecast expenditure 7 million actual expenditure 9.8 million. As with every other financial action of this government a disaster. On a side note information in customs office to the effect that the national debt will start to decrease from day one of VAT implementation. Has that happenend ??? No, because they are incapable of reducing expenditure with the next down grade looming then devaluation.

Can the government explain to us exactly what benefit the country has received from the $20 million spent on these two carnival events?

I think the strategy is to keep about 30-40 thousand people drunk and hungry for the next party to secure votes.

They plan to keep wasting money on it in hopes it will become popular with tourist near by. Which it wont because the event strongly lacks authenticity.

It's sad to see what we allow them to waste money on. Them being the PLP and FNM...

There is NO reasonable cultural, moral or practical justification for the PLP government to continue funding this foreign festival concept (except for PLP political expediency)

"#Apart from the financial specifics provided by the BNFC, the commission adopted and presented aspects of a study conducted by the College of the Bahamas."

Could the reporter PLEASE get a copy of the two Carlton Smith shows in which he interviewed the COB students conducting the carnival "research". The responses and quality of inputs were poor at best. PLEASE. Stop using that "research" as official justification to report nonsense.

The students were heard making subjective comments like, the band owners were "nice", they "tried" to read h the commission but couldn't, they had difficulty getting people to answer questions "so they just asked their friends", one young lady mentioned her desire to join a band she interviewed.

Nothing against the students as they were clearly not researchers and the course was merely meant to teach them HOW to conduct research, but the quality was awful. Several times Carlton tried to gently guide them to what they needed to do to get results. It's really alarming that the commission is using that study, of all things , as evidence of anything.

COB needs to protect its brand especially now that they're at university status, they can't have any and every study stamped university of the Bahamas

Brand? lol. Try this "COB or UOB is committed to providing the best possible tertiary education in the world. Its results will be demonstrated by the quality of thinkers, researchers educators and professionals it produces." Forget brand- they need SUBSTANCE and they need to teach their students proper research and information gathering methods. Until then- those students should not be presenting anything to the public because they have nothing to give. Our bar is too low.

Meanwhile students in our public education system have no text books and other essential school supplies....not to mention that many of the schools are in desperate need of repairs and frequently lack water fountains for the children and proper running water to keep restroom facilities in a sanitary state. Christie's soul is destined to burn in hell for all eternity!

More basic than books or supplies ........... no teachers of core subjects for many students in many schools throughout our country

"The Road Fever event, which grew by leaps and bounds"

does anyone know what's the body count equivalent of one "leap" or one "bound"?

I guess we now know where our hard earned VAT money is going (down the Carnival drain).

..."Toronto’s Caribbean Carnival (the largest of its kind in North America) is also phenomenally successful, drawing in 1.2 million visitors. A 2010 study found that it generated $438 million for the local economy and resulted in the creation of some 6,800 jobs, of which over 80% were in the Toronto area. The return on investment is staggering, since the combined cost to Toronto and the provincial government of Ontario was only slightly over $1 million."

I don't know Mr. Major- but I do know that he doesn't have a record of success. Why then is he being placed anywhere near the public purse?