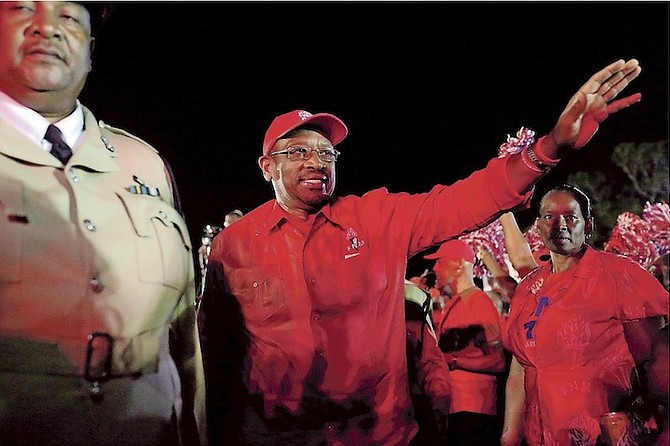 Addressing scores of supporters at a joint branch meeting in Golden Gates, Dr Minnis reiterated that an administration led by him would not “waste the people’s money on foolishness” but instead would privatise Junkanoo Carnival.

He said the way the government made a “boo boo” out of the event proves “they don’t care and they lack compassion.”

On Monday, less than a week after officials announced the event’s line-up, Prime Minister Perry Christie confirmed that the 2017 Bahamas Junkanoo Carnival has been postponed until after the general election.

The news has “blindsided” key stakeholders and vendors, who decried the confusion, likely damage to the country’s reputation and potential financial losses resulting from the date change.

The event has been pushed back from May 4-6 to May 18-20 in Nassau. Festival organisers announced on Tuesday that they will also drop its Grand Bahama events.

The Grand Bahama installment was originally set for April 21 and 22, and the pre-event included the Music Masters semi-finals competition. The loss of the major event will likely be considered a setback for the island’s struggling economy.

“Look how they have made a boo boo out of Carnival. Can’t even decide on a date, inconveniencing many who had already made plans. The FNM will privatise carnival,” Dr Minnis said.

In an interview with The Tribune earlier in the day, FNM Chairman Sidney Collie said the FNM “has no plans” to cancel the controversial event if the party wins the next election.

At the Golden Gates Park on Tuesday night, Dr Minnis also said “Cotton Candy Christie” is in for a rude awakening and poked fun at the “small crowds” he claimed the PLP is attracting at its rallies, which the PLP has billed as regional branch meetings.

The Killarney MP said Mr Christie no longer has the “stamina and work ethic” to be the country’s leader and it is time for the Centreville MP to be retired for good.

“Did you hear the joke about someone going to Christie Saturday past and telling him that the PLP was going to win again? When Christie got excited and asked if this was true, the person responded: ‘April Fool,” Dr Minnis said.

Dr Minnis said Mr Christie is “angry and confused” and has set a very “bad example” from the top.

“Given the demands the country faces, we need a prime minister who has the stamina and work ethic to do the job,” Dr Minnis said.

“Because he will not retire voluntarily, the Bahamian people will retire him in short order. If being prime minister was just about talking all the time, Christie would be the man for the job. But he is no longer up to the job.

“Christie is angry and tired and confused. That’s why he stuck up his middle finger the other day. Christie is in serious trouble in Centreville. Yesterday (Monday) he used more indecent language talking to students at the University of the Bahamas. He had to quickly apologise for once again being rude and setting a bad example.”

Dr Minnis said the support for the FNM “is overwhelming and growing day by day” and many PLPs are now ready to vote for the opposition party.

Comrades! You'dda thought Boo-Boo Minnis would have dealt with his own internal core problem of Long island's MP Boo-Boo "Reheasa" - before taking on his new role as da conscience prime minster Boo-Boo Christie.
The Red Party's problems does run much deeper and wider than any of the PM's mutterings - strange as they be.

Tal. Loretta is history when it comes to the FNM. He need not concentrate on her. She will create her own demise just like Eddie Key. She is now an independent and will not have any effect on the outcome of this election. Little support in Long Island

Tal maybe if you learned to write better English you would be more credible. Or are you trying to disguise yourself by gobbling like a turkey..a cold one at that. Christie said Minnis is unqualified to govern yet he has two events that he known was happening since last year clashing. Not only that but he has sufficient over both events to move either or both froward or back to avoid them conflicting. And not only that, he was the only human in the country that knew what day he would have set the elections so there was no need to wait to the last minute to postpone carnival thereby inconveniencing so many people and even causing a loss of revenue to an already financially crippled event. So the reason for it may be other than the one given.

Minnis has failed to articulate even one major policy initative he would undertake to try and turn things around for the Bahamas. Specifically, he has made no compelling mention or commitments whatsoever regarding:

1) The holding of a Royal Commission of Enquiry to investigate even one of the many egregious instances of corruption, fraud and outright theft that has occurred during the last five years;

2) The passing of meaningful and enforceable freedom of information legislation with few exceptions or loop holes for the government and politicians of the day;

4) The establishment by legislation of a formal Office for a truly Independent Director of Prosecutions in order to once and for all end the government's ability to wrongfully interfere with the judiciary through its de facto executive (PM) control of the Office of the Attorney General;

5) The wholesale repeal of the gaming web shop legislation;

6) New legislation to establish a National Lottery, the profits from which would be earmarked solely for the purpose of contributing to the financial needs of our public education system;

7) Tightening of legislation to give the Office of the Auditor General and the Public Accounts Committee the biting teeth they need to discharge their important duties in the way intended and expected; and

8) New campaign finance reform legislation to avoid the will of Bahamian voters being thwarted by large amounts of 'tainted' money directed at politicians by the likes of Sebas Bastian, Craig Flowers, Peter Nygard, Christie's Red China friends, and so on.

A passionate stance by Minnis and the FNM on implementing just these eight major initiatives alone would go a long ways towards putting the Bahamas on the right road for its future and the betterment of the Bahamian people. But "No", Minnis has made no meaningful or passionate commitment to us on any of these most important matters. Minnis instead prefers to ramble on and on ad nauseum about how the Christie-led PLP government has failed the Bahamian people. It's as if Minnis and the FNM believe they need not commit to anything on our behalf. That just can't be right and should give each voter serious pause for thought!

Totally agree, FNM isn't winning they are just letting the PLP lose by riding on their failures.

How long to you think it will take the FNM to carry these initiatives out? History tells us not to hold our breath..

Are you taking notes Doc? Good points raised here, some of which are no doubt better dealt with AFTER the election.

When you thought it couldnot get any worse for the PLP ........ Carnival rears its ugly head