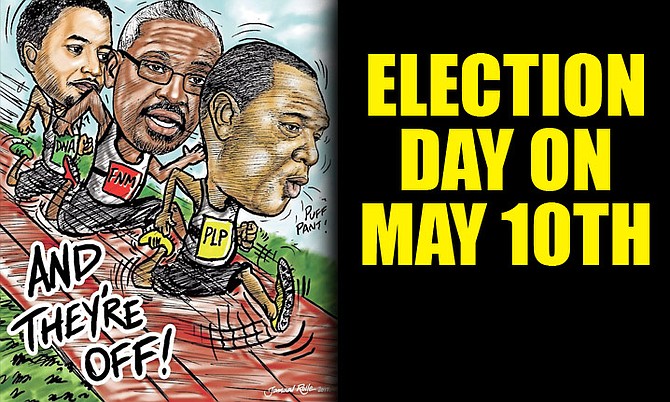 PRIME Minister Perry Christie rang the proverbial bell yesterday morning, announcing that the 2017 election will be held on Wednesday, May 10.

His televised address, given live at the Office of the Prime Minister, came moments after Police Commissioner Ellison Greenslade, in his capacity as provost marshal, read proclamations outside the House of Assembly from Governor General Dame Marguerite Pindling dissolving Parliament.

Mr Christie said he is confident the election will be free and fair and will follow a spirited and peaceful campaign that is consistent with this country’s political traditions.

“Earlier today, just a short while ago, the present Parliament was ofﬁcially dissolved,” Mr Christie said. “Every seat in the House of Assembly is now vacant.

“It is now left to you, the citizenry of our beloved nation, to decide who will fill those seats in the next House of Assembly. In doing so, you will also be deciding who will form the government of the Bahamas for the next five years.

“You will make that momentous decision in what I earnestly hope and pray will be free and fair elections following a spirited but peaceful campaign. Let us contest the forthcoming elections with all the vigour at our command.”

“We are one of the oldest democracies in our hemisphere. Our Parliament traces its history back hundreds of years.

“Let us by our conduct in the general election campaign that ofﬁcially starts today prove ourselves worthy of the great democratic traditions of free, fair and peaceful elections that have made our country the marvel of nations around the world.

“I have every conﬁdence that we shall.

“And so, my fellow Bahamians, it’s over to you now. Together you will decide the way forward. You will do so in general elections that will take place throughout the Commonwealth of the Bahamas on Wednesday, May 10, 2017,” Mr Christie said.

While many were looking forward to Mr Christie’s announcement, not everyone was happy with the date chosen, as it coincides with the anniversary of the deaths of Royal Bahamas Defence Force (RBDF) marines aboard HMBS Flamingo.

Some people called into The Tribune yesterday to complain about the government’s oversight in this regard.

Observers recognise the tragic event as not only a defining moment in the history of the embryonic RBDF, but also for the relatively newly independent Bahamas. On the anniversary, officials normally hold a brief ceremony at the RBDF base in honour of the marines.

Meanwhile, both major parties have ratified all 39 of their candidates.

Up to press time yesterday, however, it was not clear when candidates’ nomination day would be.

The number of registrants for the election is more than 170,000, with Monday being the final day for registration.

So far, CARICOM and the United States have accepted invitations to observe this year’s election.

The Progressive Liberal Party, which won 29 seats in 2012 compared to the Free National Movement’s nine is attempting to buck a trend that’s been unfavourable to governing parties in this country’s recent history:

Bahamians have voted out the incumbent party in the past three consecutive elections.

So far, Mr Christie has boasted of the competency of his team of candidates, emphasising that they are equipped to build on his administration’s successes.

FNM Leader Dr Hubert Minnis, however, has waged a campaign portraying the Christie administration as bumbling and unsuccessful.

Among the various smaller political parties vying for votes, the Democratic National Alliance is the one expected to have the greatest impact, although many concede that the party faces an uphill battle against the two major parties.

So long Perry Christie. We hope we never see you or any of your kind ever again.

After this loss there will be a power struggle within the ranks of the PLP party.

These old worthless, crooked fools like Brave Davis, Perry Christie, Bradley Roberts, Shane Gibson, and Bernard Nottage need to step aside and allow the PLP government to rejuvenate and revitalize themselves with young, effective talent. The people of the Bahamas have lost faith and confidence in these old, antiquated clowns. Their follies, antics, and incompetence over the past four decades have collectively brought our country to ruin. Under the PLP government our economy has regressed to the point that our currency is set to be devalued in the next year or two. I fear that the average Bahamian does not realize how serious this threat is and the debilitating consequences that are about to fall on us as a result.

I look at these jackass PLPs running around in their PLP shirts waving pom-poms for Perry Christie and I can only shake my head. How stupid and ignorant can one be???? Can't these idiots see that this man is a buffoon without a clue??? Can't they see the state that this government has brought our country to??? The PLP has made our country a melting-pot of corruption, incompetence, unaccountability, failed promises, and dishonesty. I remember when I was back in primary school and high school..... nobody liked the dumb students. We all knew that dumb students were a dangerous liability and we made sure to stay far away from them. The sad thing is...... these very same dummies grew up and now have input as to who will govern our country. Sad sad.

They not only vote, but offer themselves for office. Have a chat someday with some of the PMs classmates...

"The PLP has made our country a melting-pot of corruption, incompetence, unaccountability, failed promises, and dishonesty. I remember when I was back in primary school and high school..... nobody liked the dumb students. We all knew that dumb students were a dangerous liability and we made sure to stay far away from them. The sad thing is...... these very same dummies grew up and now have input as to who will govern our country. Emphasis"

@COBALT and to think you are a US citizen!

I'm a Bahamian citizen, John. I work in the U.S. a lot but I reside in the Bahamas.

I'm a US citizen and in school I don't know anyone that felt like students with lower grades in subjects were a "dangerous liability." To say no one liked the "dumb students" is a untruth as well. First off lets lets not label people. Secondly some people just don't test well. Our sports players are forever letting their grade go while they are busy practicing for the games and they are the most popular students in the schools. Just my opinion.

I heard the radio cut the Commissioners microphone. I will not believe this date until i hear it from Juan McCartney. Just more tricks. Election will likely be April 23rd

There may indeed be two elections dates. One for PLP's to vote and one for everyone else to think they are voting. Guess which one will be counted for the election results?

This is hilarious reading you all comments back then!

Comrades! I been preparing my list of red shirts who if elected to the People's Honourable House of Assembly are most likely favoured by Minnis for cabinet posts.
If Minnis, places Michael Pintard, as Minister over Grand Bahama - Freeporter's will resort to cannibalism on Minnis.

Tal....if Freeport give ANY seats to FNM or PLP they obviously dont think their economy has sunk low enough. Currency devaluation will be next for them.

I heard in Freeport they already accept the Yuan and are in the process of making the B$ illegal tender! Plus there isn't any B$ in circulation there anyway so the switch over is quite simple.

Always vote for the better candidate no matter what his or her party affiliation may or may not be. Voting along party lines may serve a particular party well, but not necessarily the country. We need for the country and all Bahamians to be served well. Voting by party rather than calibre of candidate often defeats this most important objective. We really want and need MPs capable of doing good not only by their constituents and political party (or lack of party affiliation), but also by our country and all of us.

The DNA is a non-factor in this election ........ McCartney is a PLP stooge

You just cannot help living in the past, can you?

If true, will the pants come back in style too?

If the UBP were somehow miraculously back in power would that be so bad? In the fifties and sixties this country was a much different, better and more civilized place to live regardless of your skin color and racism has never flourished so much as it does now,only in reverse,just ask Fred Mitchell. No the the UBP were not as pure as the driven snow but at least then there was a semblance of honor among thieves, the Rule of Law still existed, we had a thriving economy and no national debt. Look at all of the social and economic strides we've made since Majority Rule, rampant crime and record murders,government corruption and gambling epidemic, economy in ruins. If we are honest with ourselves the only people, black or white,our new Masters have empowered in the last fifty years have been themselves. Ask anybody living in Masons Addition, Bain Town or the Grove what any of our political masters ever did to lift them up besides giving them a temporary election job cleaning toilets or weeding the roads, its been all for me baby for a long time.

When will our Bahamian Judges stop being complicit with corrupt politicians?

Our country is going to hell in a Chinese hand basket and those in authority to act DO NOTHING!

Lying again!!!!! " In doing so, you will also be deciding who will form the government of the Bahamas for the next five years." If PLP gets 15, FNM get 15 and DNA get 9, there will be a coalition. The people have nothing to say about that anymore!!!!

Some of the politics are controlled by forces outside a country and if the persons in power do not take control, they become mere puppets. For example much of what is going on with the Brazilian economy is being manipulated from outside that country. Venezuela economy has collapsed because of external forces acting on its oil production and refining operations. OIL has been in 🇭🇹 Haiti. More than what is in Venezuela. But because of the current world market where there is a glut, Oil is not being pumped in Haiti. Instead 20,000 troops have been sent to that country to guard the oil fields. More troops than was sent when that country suffered a major and devastating earthquake. And here in the Bahamas our natural resources , like sand and aragonite is being frittered away and no one in government can say how much or why the country is not being properly compensated. There is near a 90% certainty that oil in commercial quantities exist in the Bahamas. And despite agreements being made with foreign companies to explore and eventually drill for oil. The Bahamian people are being kept in the dark. Also more than 90% of street lighting and public spaces can be done by solar. And also a significant portion of home energy needs. Reducing our reliance on oil and the need to import significantly. Yet our government brought in a company to manage our power company that is discouraging the use of solar energy and even trying to make it illegal. WHY?

madhatter/sickened you all talking like Freeport is a foreign city. Honestly some times I wish it was!! We do not accept the yuan. Our economy is the way it is because of small minded politicians who think every thing should happen in nausea.......... I mean Nassau/ N.P.. The crime ridden capital of our Bahamas.