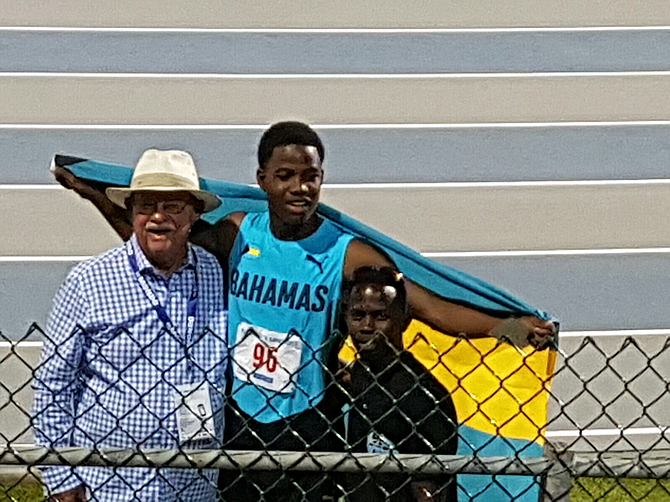 A YEAR ago Shaun Miller was injured and missed the trip to Grenada, so he had to wait for this year to make his debut at the 46th Flow Carifta Games.

It was certainly worth the wait as Miller soared to the top of the podium as the under-18 boys’ high jump champion on Easter Sunday night at the Sentro Deportivo Korsou National Stadium.

In stealing some of the spotlight from the 4 x100 metres relays, in which the Bahamas received one of the four gold medals from Jamaica on the disqualification of their under-18 girls’ team, Miller cleared a personal best of 2.06 metres or 6ft 9in to close out day two as a champion.

At the end of the night, Team Bahamas pushed its total medal count to 17 with four gold, seven silver and six bronze to remain in third place in the standings behind Jamaica with 54 medals, including 23 gold and Trinidad & Tobago with five golds in their 13-medal haul.

Miller, 15, joined his big sister Olympic 400m champion Shaunae Miller, as a Carifta winner. She was the Austin Sealy winner of the Most Outstanding Award in 2013 in Nassau when she pulled of the under-20 girls’ 200/400m double.

He also gave a lot of praise to his parents, Shaun and Maybeline Miller, as well as his personal coach Ronald Cartwright and Team Bahamas jump coach Nekeno ‘Keno’ Demeritte for the role they played in his success.

In another exhilarating final on the field, Douvankiyli Rolle had to settle for the bronze in the open boys’ pole vault with 4.30m (14ft 1 1/4in). He had to watch as hometown boy Glenn Kunst extended the Carifta record to 4.60m (15ft 1in) for the gold. Rolle's team-mate Ramel Poitier was fifth with 3.80 (12ft 5 1/2in).

As expected, the 4 x 100m relays came down to a showdown between the Bahamas, Jamaica and Trinidad & Tobago. But the team of Kendesha Ingraham, Devine Parker, Jaida Knowles and Megan Moss moved to the top spot in 45.05 seconds after Jamaica’s Carifta record was nullified with the disqualification. Trinidad & Tobago got the silver with 46.49 and Guadeloupe secured the bronze in 46.84.

In the under-18 boys’ relay, the team of Adrian Curry, Joel Johnson, Jonathan Smith and Denvaughn Whymns clocked 40.77 seconds for the silver behind Jamaica’s record breaking 39.97. Trinidad & Tobago got the bronze again in 40.84.

With three teams entered in the under-20 girls relay, the Bahamas quartet of Blayre Catalyn, Renee Brown, Rashan Darling and Sasha Wells held onto the silver in 46.45 behind Jamaica’s winning time of 44.83.

The under-20 boys’ team of Tavonte Mott, Javan Martin, Johnathan Smith and Karon Dean broke the trend when they came in with the bronze in 40.59. Jamaica won in 40.10 and Trinidad & Tobago claimed the silver in 40.24.

Holland Martin, the 18-year-old Tabernacle Baptist Academy student, highlighted the morning session with his silver in the under-20 boys’ long jump after Acacia Astwood claimed bronze in the under-17 girls discus.

After he fell short of advancing to the final of the half-lap race with fifth place in his heat and ninth overall in a time of 22.04 seconds, Martin made sure that he finally got his first individual medal with the long jump with his leap of 7.33 metres or 24ft, 0 ¾in on his sixth and final attempt.

“I was feeling real bad, so I wasn’t able to jump what I expected,” said Martin who came down with the flu. “But coach James (Rolle) told me to get mad and get aggressive and just go out there and execute on the last jump.”

Admitting that he wasn’t at his best, Martin said he really wanted the gold but will settle for the silver – his first individual medal. He said the 200m really inspired him to go for the long jump gold after he just missed the cut for the final.

On her debut, Acacia Astwood had a seventh place finish in the under-18 girls’ shot put on day one, but she too ensured that she did not go home empty handed by getting the bronze in the discus on Sunday with her heave of 39.40m (129ft 3in).

“It was amazing because this is my first Carifta Games and my first year throwing,” said Astwood, a 15-year-old student of St Anne’s School. “I just feel awesome. I am on a high right now. At first I was a little shaky throughout the competition, but I know I put in a lot of work and eventually I knew I would get a good throw in, so I was very pleased.”

The evening session opened with Gabrielle Gibson adding a bronze to the medal tally when she had enough of a gap at the finish to hold off Barbados’ Shonita Brome in the final of the Under-18 girls 400m hurdles. Gibson clocked 1min 01.29sec to Brome’s 1:01.30.

Jamaica got the gold and silver from Sanique Walker in a Carifta record of 58.95 and Taffara Rose in 1:00.95 respectively.

“I didn’t do as well as I wanted to do, but I finished the race pretty strong,” said Gibson, a student of Bahamas Academy. “I saw the girl from Barbados coming so I had to lift my legs and go for it. It wasn’t what I wanted, but I’m happy.”

The Bahamas picked up its first silver and bronze combination in the under-18 boys’ javelin as Sean Rolle got in a toss of 65.51m and Michael Angelo threw 63.84m respectively.

Tyriq Horsford, of Trinidad & Tobago, established a new meet record of 76.50m for the gold.

In one of the most gruelling events in the competition, Kimona Wilson ended up seventh out of a field of eight competitors in the open girls’ heptathlon with a total of 4,084 points in the seven events over two days.

“I feel pretty good about my performance,” said Wilson, who was proud of her accomplishment, posting her personal best marks in the high jump, long jump and 100m hurdles.

Wilson, however, admitted that the shot putt and the javelin were the two events that she struggled with. But the 400m hurdles specialist said she was impressed with the competition she experienced but is not sure if she will continue competing in the event.

The day began as usual with the Bahamian delegation holding a spirited worship service as they normally do in attending the games in the past.

Mr. Brent Stubbs, please learn to write with more enthusiasm. This is the second article that i have read for the morning by you and you make great news seem not so great.