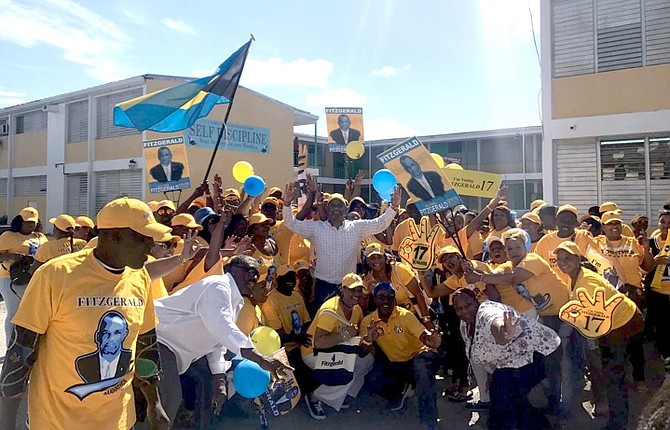 IN the face of some of the toughest questions of his political career, Education Minister Jerome Fitzgerald smiled and bore a calm demeanour as he was renominated in the Marathon constituency shortly after 10am on Thursday.

Wearing a long-sleeved plaid shirt, jeans and socks with "PLP" engraved symbols, Mr Fitzgerald was buttressed by as many as 100 party supporters who shouted "Fitzgerald or nothing."

He did not respond to reporters' questions about the Tribune's revelation that as early as 2013 he requested deals from Baha Mar from top officials. He said he will release a statement on the matter this afternoon, though he provided no additional details.

Among other things, the leaked emails showed Mr Fitzgerald making references to "promises" made to him by Daniel Liu, China Construction America's (CCA) vice president.

Mr Fitzgerald was one of the government's lead negotiators on Baha Mar, and the revelations raise questions about what appears to be a conflict-of-interest.

At C I Gibson High School, where candidates for Marathon were nominated, Mr Fitzgerald seemed calm. He even showed off some elaborate dance moves as he headed to the school. But he grew defiant in the face of reporters' questions.

When pressed on why today's revelations appear to contradict his statements to reporters earlier in the week, for instance, he led the crowd in a chant, shouting "PLP" and prompting them to shout "all the way”.

Haven't said anything for a while on this site. But how do you like the emails?

the plps are proud of the emails.

You don't read before you talk aye. . ."he business all ova the papers dem bouy".

Are you the only one living under a rock? The emails have already been published across social media. Stop living in denial. Right is right and wrong is wrong, no matter who it is. Only in the Bahamas we cover for people when they do foolishness.

Mr: Fitzgerald remind calm. The enemy must be really upset.

Is your head that far up his R's. Jesus. Nobody can be this foolish!

Honestly, how does this make you feel? Knowing that he did this?

"the enemy must be upset"

No, BAHAMIANS are upset. I side with no party and I find this man to be a repulsive corrupt carpet bagger. If you are that far up your own party's ass then you are even a Bahamian, nor are you nationalistic.

Birdie your defense of this is absolutely appalling, but not at all surprising

Birdie, how much of your brain was removed in order for you to function as a PLP fartcatcher?

He remains calm because the A.G. is up to her hip boots in the same scandal. I see another inexplicable Nol Pross coming Birdie.

Birdie ........... you are a pathetic human being .......... based on the Rules of Cabinet Procedure, The Prime Minister should have requested the resignation of at least six of his Cabinet Ministers since 2012 ......... Fitzgerald was one the first to have been fired.

Birdie, I suspect you and many people on this site will be singing similar tunes once the PLP lose this election. We ALL will be holding the next government's feet to the fire, no matter who wins. Most of us on here stand up for right and hate corruption. If the next government is FNM or DNA and we find them to be corrupt we will be calling them out as well.

I wonder how Fitz feels now the shoe on da other foot, look like you een the only one who's good at dumpster diving. Talk dat!!

When pressed on why today's revelations appear to contradict his statements to reporters earlier in the week, for instance, he led the crowd in a chant, shouting "PLP" and prompting them to shout "all the way”.

This is reminiscent of the bleating sheep in Animal Farm. Thanks

This is all too close to Animal Farm. it as if the book was written based on our story.

Fitzgerald is calm because he is confident and certain that everyone around him is ignorant and stupid. It's that simple.

For the Minister of Education he has his hands deep in the wrong area!

I still don't know what he's waiting on!

This is just the start of it...Maynard Gibson next, all those quotes and and copied letters translate into evidence!!

Lol...This idiot is the biggest joke in town....Let's see who he drags down with him.

Good people...... If only half of all the allegations are true about the PLP, then the Bahamian people would be wise to vote them out. We have to much to lose to take a chance on them. People please consider your Country and make the right choice.

Sometimes it seems that all you have to do to get elected is throw a good party or parties, have motorcades that hold up traffic during the middle of the week, promise pie in the sky things, i.e. free electricity. Bahamian voters seems so gullible. Can't they see that these politicians are just elites using the masses for their own ends. Working them up into a frenzy, promising them the stars but delivering dirt, just to get their votes. Wake up Bahamas!!

The reason the PLP has done so little for this country in the last 5 years is because all of them have spent the vast majority of their time and energy trying to pad their own pockets. This attempt by Fitzgerald is a tip of the iceberg. All the way up to Mr Perry Mugabe driving around collecting suitcases full of cash all week. We dont need another damn commission of inquiry. We need investigation, prosecution, confiscation and incarceration. Or it is never going to stop !

He is calm because of people like Birdie, Tal and all PLP supporters who would defend him as he is smearing them with his own feces. Or give them a ham or turkey or sinecure, and they are happy to kill the truth, patriotism and altruism and vote these unpatriotic criminals back in.

What is going on here, is one of the central operating mechanisms of the PLP party. They really don't care, because they have a cadre of apologists to pave the way. And the deliberate stupification of the electorate through the degradation of education will pay dividends in re-election.

The fact that the PLP will get votes (or even the fact that birdie posts what she does) is a grave indicator of the low collective intelligence, the lack of enlightenment and the sheer hopelessness of ever dreaming that we rise up to be a normal country with smart, caring, patriotic, prosperous human beings. The PLP want Bahamians to be bum-sniffing, ever-copulating monkeys so that they can go on raping this country. Just look at the people in the picture. Give them a free hat, a tee shirt, a shot of booze and watch the natives dance.

Really Banker is your view so low and disrespectful of your fellow Bahamians. If by chance I should meet you There will be a bright smile on my face and a good greeting to you. Because even a "D" grader like myself knows that I do not have to agree with you. But I will always respect you. It is to bad that you "A" do not know this . so just insult it makes you feel really good. so go for it

I am truly sorry that you do not agree with the principles of Truth, Goodness, Patriotism, Democracy, Altruism and the Common Good. God Bless You.

Banker you are so correct. birdie is an absolute idiot,or a great troll. I just find it hard to believe that he /she is actually living in the Bahamas

Thanks and may the Good Lord be always with you.. At the end of the day He is all we have.

With all due respect to you sir, but folks like you would probably believe a PLP MP if he said the sky was yellow. Come on, are you that blind? These people are corrupt, self interested, incompetent and list goes on. Like one of the commentators said, this incident is just tip of the iceberg. These people are in office to get rich!