Nomination Day: As it happened 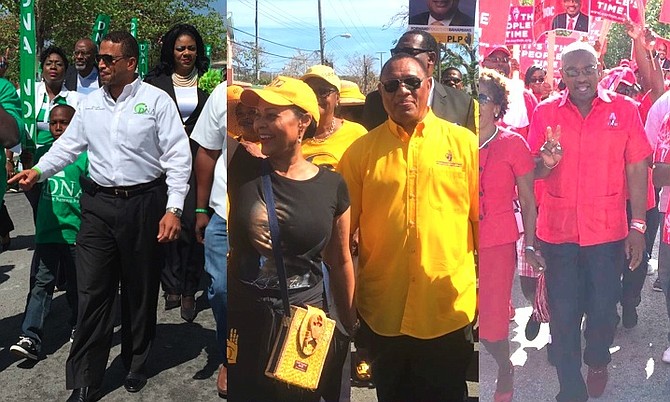 Today is Nomination Day and tribune242.com will bring you all the highlights as candidates nominate for their constituencies surrounded by supporters, flags and motorcades . . . 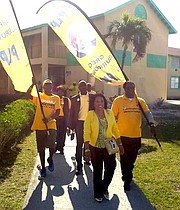 9.30am: Greg Burrows arrived just after 9am in Bamboo Town with about 40 supporters clad in gold shirts. They marched from nearby Gamble Heights.

9.55am: Mr Burrows says he feels confident he will be the next Member of Parliament for Bamboo Town, despite being the newcomer. He added that his resumé speaks for itself.

10.20am: PLP Marathon candidate Jerome Fitzgerald showed no signs of being affected by today's headlines, as he danced his way through his constituency.

10.40am: John 'Chippie' Chipman, the grandfather of FNM Centreville candidate Reece Chipman, has come out in support of Prime Minister Perry Christie. 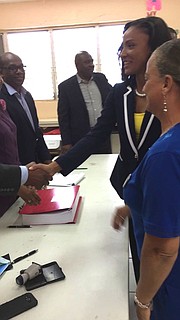 11.10am: Reneika Knowles is officially nominated as the PLP candidate for Killarney - after a slight delay with the verification of the signatories on her nomination papers.

11.20am: DNA Leader and Bamboo Town candidate Branville McCartney arrived in the constituency with a motorcade and Junkanoo rush out.

11.25am: This receipt (right) was posted on Loretta Butler-Turner's Facebook page. She has nominated and is officially no longer a member of the FNM.

Buffoonery at it's finest

Part of a democracy. Be grateful we still have one (or what's left of it).

I was referring to Fitzgerald dancing like a jackass. Knowing fully well what hit the paper today.

I should have been more specific.

Little Africa! What a disgrace... especially Jerome acting like a waped out homeless bum.

Happy people dance and sing. It is a good thing perhaps more Bahamians should try it and there will be less crime,

Yeah Bird Shit, was you dancing and singing this morning when another low life like you was killing that man right on the doorstep of our tourist industry, don't worry, be happy, right?

I see Bernie flew in for the photo op. Wondering if she's heading back out tomorrow. BOL!!

Fitzgerald looks like he's trying to rake in more millions!

What I would like to know is how so many people get time off to attend these nomination events. I know you need a certain amount of signatures, but don't these people work?

Also, why don't they change the law so that the nomination fee is not returned? The treasury always broke, so why can't it keep all of that money instead of refunding those who get a certain amount of votes, especially to mostly rich people, or people who will soon be rich.