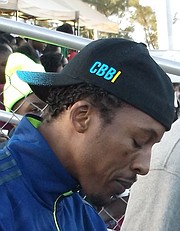 HE'S been the focus of attention for the men's side of the Bahamas athletic programme for the past two decades. But for the first time in his career, Chris 'Fireman' Brown will not be on the Bahamas' IAAF World Championship team.

The country's most decorated quarter-miler will not be making the trip to London, England this week for the championships that will be staged from August 4-13.

It's the first time since he started competing at the championships in 1999 in Seville, Spain, when he anchored the quartet of Timothy Munnings, Troy McIntosh and Carl Oliver to a sixth place finish in the men's 4 x 400m relay final, that Brown will be participating.

"I made the team for the relay, which was the goal, but, mentally and physically, I decided that I was going to sit this one out, regroup and get ready for next year's Indoor Championships," he said.

"Next year will be my final year of athletics. I will make a nice announcement. It ain't over yet. I still have one more World Indoors left in the tank and then we will see how it goes for the Commonwealth Games."

Brown, at 38, has never won an individual medal at the World Championships or the Olympic Games, but he's been the centrepiece of every 4 x 400m relay team that has ascended the medal podium.

When the IAAF World Championships is held in Birmingham, United Kingdom, next year, Brown will be going after his sixth individual medal in the 400m, adding to the gold he won in Doha in 2010, silver in 2014 in Sopot, Poland, and bronze in Moscow, Russia in 2006, Valencia, Spain in 2008 and Istanbul, Turkey in 2012.

"The World Indoors next year will be my final appearance," Brown said. "I will be saying farewell after that. Next year is definitely going to be it for me.

Although he ran at the Bahamas Association of Athletic Associations' Nationals in June where he placed sixth in 47.01 seconds in Grand Bahama, Brown said he knew at the beginning of the year that this maybe a year of transition for him.

"I was back and forth on the issue of whether or not I would be going to the World Championships," he said. "It's not something that just spring up. At the beginning of the season, I was contemplating whether I would go or just rest my body.

"I've been going for the last 20 years straight and my body hasn't had a chance to recover fully and every year it's one major event or the other. If I can't give 100 or 200 per cent, I don't want to go at all."

The former national record holder spent the beginning of the year assisting the Local Organising Committee for the inaugural Grenada Invitational and subsequently, he missed the IAAF World Relays at the Thomas A. Robinson National Stadium in April because he felt he wasn't in "tip top" shape.

While he will not be suiting up in London, Brown said the Bahamas still has a capable team, led by Steven Gardiner, and including Michael Mathieu and Ramon Miller with Alonzo Russell, Kendrick Thompson and Ojay Ferguson in the pool.

"I think it's a good young strong team," he said. "If the guys can put their heads together and move as a unit, I think they should be alright. But if they don't, divided we fall.

"Hopefully, with the multiple medalists on the team, they should be able to handle it. I think they have a good chance of making the final. Once they do, anything could happen. They could go for a medal."

If they do, it will be the first time Brown won't be a part of any celebrations.

Is this the same Chris brown who is suppose to be retired?

I thought he was retired too. BUT, if HE feels he has more in him, more power to him. He's come through for the country on many occasions

I marvel at where Chris Brown came from, this is the same man who drop the baton. Anyone remember that? The WHOLE country was mad at him. Everybody. But he didn't quit, he didn't let defeat defeat him. He came back and he anchored us to silver, then to gold. GOLD. the same man. Whatever you need to do Chris do it, in my mind you get the chance to try.

I must first say that this was an excellent article. Secondly, I must express how appalled I am by some of the above comments. Who ever said that "The Fireman" retired? That is false. I'm sure when he does, he will be first to let you all know. Next, when in Chris 'Fireman' Brown's history have you ever known him to drop the baton?! Really?! I thought you all were Track/Field fans...fans who don't know the facts. Chris Brown has NEVER dropped the baton in his 20 yr career of carrying The Bahamas on his back. There have been others who have done so. Please research before writing. If you are referring to when he was a rookie and attempted to take on Michael Johnson in Sydney 2000 and ended in 4th place, that's another story...let's respect the fact that he had the fight and heart to do so. By the way, that team was upgraded to Bronze.

All that he has done to represent this country, the pride he has brought to so many when the National Anthem has played in stadiums, laying it all out on the line last year in Rio to bring the country a BRONZE MEDAL when so many counted he and his teammates out, these are your responses? Then another brings politics to the conversation? WOW! Man really can't be satisfied, thank God none of you are in charge of his destiny and he draws his strength from the Creator. You call yourselves Christians. The way you all treat people is shameful. So sad to see your own people hating on not just 'The Fireman', but on fellow brothers and sisters period. Wake Up!

Chris 'Fireman' Brown, you are to be commended for all that you have done for The Bahamas, for all of your achievements in the sport, and for the legacy you began with the men's 4x400m relay. If so called T/F fans knew their history, they would recognize as the article stated, who has been the consistent 'centerpiece' of every 4x400m relay medal performance. I respect your heart, your fight, your talent, your tenacity, and your leadership. You have done well and nobody could ask you for more. Haters are just going to hate, that's just the cloth they're cut from. Brother, God will continue to guide you, NOT man. No matter what you do, KEEP THE FIRE BURNING!