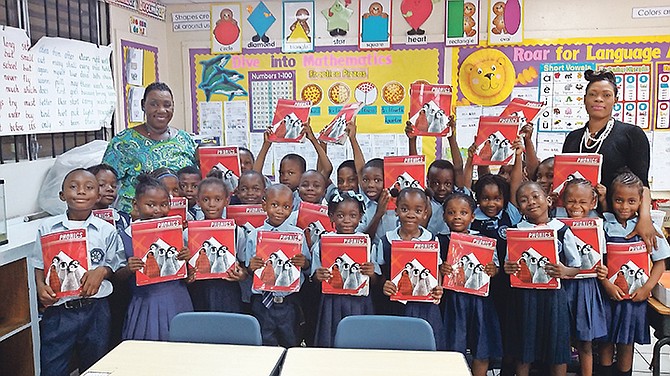 Teachers and grade one students at Woodcock Primary School.

AS the new school year approaches, teachers and parents at Woodcock Primary have joined forces to ensure that students are fully equipped with workbooks.

In the past, only a handful of students at Woodcock Primary School would come to class with the required workbooks. Teachers were forced to improvise and found ways to include students who were left without.

Learning without the necessary classroom material poses many problems, the biggest being that students are unable to fully participate in class assignments. The workbooks were created to offer a hands-on learning experience and without them, students have no means of tackling assignments on their own.

Sophia Hughes, a 3rd grade teacher at Woodcock, described the difficulties she faced teaching students who did not own their own workbooks.

“As a teacher, when you’re teaching and you realise that students don’t have the material it becomes difficult,” she said. “It was about 10 parents in the class who were able to purchase the books for the children, and you can’t work with only ten children having the textbooks.”

The school soon put together a package that offered a series of textbooks at a minimum cost for parents to purchase. Despite this, many parents were still unable to put together the funds.

After realising this situation was becoming a road block to learning, administrator Amethyst Bain-Dennis brought six teachers on board to employ a strategy that would ensure books would be purchased for every student.

The strategy began with a motivational chart that was put up in each classroom at Woodcock. Teachers wrote down the names of students and asked them to bring a dollar every day to go towards their books.

Each time a student donates, a sticker is placed next to their name. Children look forward to seeing their progress on the charts and teachers make sure that their students are praised for their efforts in purchasing their own books.

Once the money is raised, books are purchased and each student goes home with a tangible reminder of how far their dollars took them.

Having 100 per cent of students owning books is something that rarely occurs in schools like Woodcock Primary. Without the love and support from parents and teachers, students would not be able to sit in class with their own workbooks.

Ms Hughes recalls students giving their extra lunch money. Some students even chipped in to help classmates who didn’t have money to give. They remained determined to give no matter how much it took to get to their goal.

This initiative began six years ago and is still going strong. After seeing the efforts teachers were making, parents worked harder to ensure that their children received their workbooks.

Alfred McBride Sr, a parent at Woodcock Primary, told The Tribune he’s grateful for the initiative the school put together.

“My son encourages me to help him because every day he comes home excited about his day at school,” he said. “When I see how much he has improved, it inspires me to give more to his education.”

With this initiative, not only do students have the material they need, but they are also showing great improvement in grades and their overall willingness to learn.

First grade teacher Miriam Collins noticed a significant boost in her students’ academic interests. Students at Woodcock can now comfortably work at their own pace while teachers provide more one-on-one time with students.

“Having their own books motivates them to work harder because children love owning their own things,” she said. “They love to compare and it gives them the opportunity to share ideas and answers as they work in their books.”

With the continued support from parents, teachers and the Lignum Vitae Organisation, Woodcock Primary can keep this six year programme going for the new school year as more people become aware of the significance owning a book means to a child.

Great job Woodcock Primary. It is wonderful to see administration, teachers, parents and kids unite and collaborate together. Look at what can be achieved when everyone is encouraged to particpate and be motivated. There are so many ways in which volunteers; donors; professionals and Corporate Bahamas can give a Hand-up to help literacy improve in our public schools and after-school programs. Thank you Danielle Barnes for taking the time out to highlight this achievement.