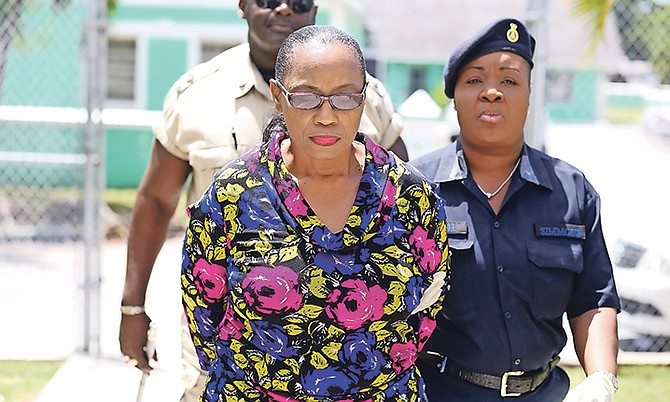 AN employee of the National Insurance Board was remanded to prison yesterday afternoon after her initial Magistrate’s Court appearance on extortion and bribery allegations.

Selena Sweeting, 56, was handcuffed and flanked by police officers as she was taken into the Nassau and South Streets court complex to stand before Chief Magistrate Joyann Ferguson-Pratt charged with a count each of extortion and bribery.

It is alleged that Sweeting, between January 27, 2017 and July 14, 2017, in respect of her duties as a public servant, demanded and solicited $5,000 from Marvin Shawn Rahming for assisting him in

She was asked whether she wished to be tried in Magistrate’s Court or Supreme Court.

The 56 year old elected the Magistrate’s court and pleaded not guilty to both allegations.

She is scheduled to return to the Magistrate’s Court on November 1 and 2 for her trial.

“The court does not have jurisdiction to consider bail, therefore you are remanded to the Department of Correctional Services,” the chief magistrate told the accused.

Sweeting was allowed a brief moment with relatives who were in court before being taken away from the courtroom.

She has retained attorney Devard Francis to represent her against the allegations.

According to her LinkedIn page, Sweeting is a project manager at the government agency.