A clip of the video from social media by Tribune242 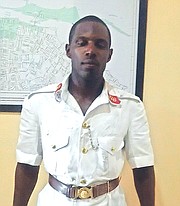 A police officer pictured after a reported scuffle.

A ROYAL Bahamas Police Force officer was recently engaged in a scuffle with a civilian near Christ Church Cathedral on George Street as he tried to handcuff the unruly man.

The incident was captured on cell phone video which was widely shared on social media yesterday.

The short clip shows the officer entangled in a tense struggle with another man in the middle of George Street. During much of the incident, the man and the officer are seen rolling on the ground and as the civilian attempts to stand up, the officer pulls his pants and underwear down exposing the man’s buttocks in an attempt to keep hold of him.

At one point in the video the civilian had the officer pinned to the ground on his back.

The officer is seen fighting to maintain his grasp on the civilian while on the ground before a nearby security guard steps in to assist.

The security guard encourages the officer to maintain his grasp on the man, while subsequently ordering the civilian to “stay down.” The male civilian responds by loudly exclaiming: “I ain’t do nothing though!”

The officer seemingly realised that he misplaced his handcuffs in the commotion, and told the security officer and others nearby, “Y’all hold him for me,” before racing off to retrieve them.

Throughout the incident the man loudly protested his circumstances, shouting: “I ain’t do nothing, boss.”

The security guard, in response, continued to tell the man to stay down. The unruly man’s bare buttocks were still visible as the security officer had him pinned to the ground.

Attempts to contact various senior police officials for clarification on the matter, such as what led to the incident, and if any charges would be brought against the man, were unsuccessful up to press time.

However, The Tribune received several photos of the police officer and the male civilian, claimed to have been taken after the altercation.

According to those pictures, the officer appeared to have two abrasions ob the wrist area of one of his arms, and another four abrasions on the elbow area of his other arm.

The eye witnesses were certainly in no hurry to help. I am of the mindset that the several on lookers should have lent their assistance much earlier - once it is clear that the perpetrator was not yielding a weapon. I am certainly glad no-one was seriously injured in the altercation.

I would much rather see this sort of video (and outcome) than one which shows a policeman shooting or billy clubbing a man.

Wondering why they got in a scuffle in the first place.

seems like it was one of those slow "let's chase a joneser" Mondays, where the officer chased the culprit some distance before getting entangled in a street scuffle with him. While the culprit seem to have the upper hand through most of the ordeal and until the security officer intervened, the officer would still not have been able to apprehend him because he , apparently, dropped his handcuffs some distance away and/or had to go to retrieve them or borrow a set from another officer. Simply amounts to poor judgement of the part of the officer and understimating the strength of the 'joneser'

He know what he did why he got his ass beat