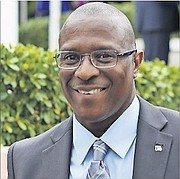 Construction will begin in 2018 on multi-purpose Junkanoo facilities in The Bahamas, Minister of Youth Sports and Culture Michael Pintard said, having already received commitments of over $700,000 towards the project from private corporate citizens.

He indicated that the project would be a public-private partnership, with the goal to build at least seven facilities throughout the country next year.

Minister Pintard said they are already looking at land in Grand Bahama, Exuma, and New Providence, and have met with Junkanoo leaders to discuss the project.

He said: “I want to thank the Grand Bahama Port Authority for partnering with us in terms of looking at a land grant, and a gentleman in Exuma who donated half an acre toward project there; we are now negotiating with families to sell land for the Junkanoo groups in New Providence.

“We’ve had a commitment from five corporate citizens for $750,000 toward the project. So it is a public-private partnership, and the Junkanoo groups will have to (contribute as well). So it is a collaborative effort, and the Prime Minister is very excited about it. We are expected to construct a minimum of seven of these throughout the Bahamas next year,” said the minister in Grand Bahama.


Mr Pintard explained that the facilities would comprise of a logo store, performance space, creative space, small cafe and a recording studio.

He stressed that the ministry has had two meetings with Junkanoo leaders regarding the project and discussed the need for groups to be self-sustaining.

“Every year they have to go out and raise capital from corporate citizens who have been pretty consistent, but they have a challenge making this commitment over the next 10 to 15 years. And so a part of assisting the groups is by suggesting that if they have a facility that has income generating components they can be in a position to generate funds equivalent to what they are getting from the corporate community,” he explained.

“It is not a new idea and has been discussed for 25 years, but it will happen in 2018. We presented floor plans, and are working with Axum Architecture firm.

Mr Pintard said that groups would be able to sell their paraphernalia in the logo/gift store. He said students and visitors could visit the facility to see the history of Junkanoo, how they create costumes.

“We are also recommending for the upstairs meeting rooms and a recording studio – we believe it can be transformative for the culture,” he said.

Will Pintard consider building a new facility like a Brazilian Carnival type facility to get Junkanoo off Bay Street????? ....... Let it recreate a half mile replica of Bay Street with about 20,000 seating capacity to commercialize Junkanoo as a year round industry with an arena-like ambience ...... ....... That would eliminate the need to compete with a road-show Carnival ........ Then you will be free to host Junkanoo and Carnival at the same facility .......... and invite cultural shows of a similar type to come and compete ...... For example you can have an all-Caribbean road festival at this facility for Mardi Gras, Independence, Boxing Day etc. ............... If this is what Pintard have in mind, it is worthwhile discussing........ This present idea is a joke.

Why do we still need Carnival? It serves no purpose but to embarrass us as culture thieves. We simply need to stick to investing in our own culture and make Junkanoo profitable.

We can't afford it.

Yes, we can ........ $20million investment that can become a booming year-round commercial industry with a pan-LAC market to host road festivals. Great addition to the Sports Centre entertainment facilities.

There not been one single initiative since Atlantis that has boosted tourism in the Bahamas. Half the tourists escaping winter from North America have not even heard of Junkanoo. And those that have -- I was a conference recently and the MOT had a mini junkanoo rush. It was indoors. You could instantly tell the Bahamians in the room. They started to moving to the beat. The noise was deafening. A colleague from Switzerland leaned over and said to me "It's quite primitive. It was fun to watch in the first two minutes just to see it, but I'm done!"

Junkanoo won't bring in tourists unless it is combined with other cultural activities. Sadly we are losing our culture quickly and becoming Americanised.

I was recounting the oral traditions of my old relatives in Moss Town, and no one had heard of them ... specifically how oral stories were told and what phrases were used.

You can't sell Junkanoo unless it somehow engages experiential tourism. Otherwise we would already be a roaring success.

Comrades, we all hungry see the government succeed but how embarrassing is it when even the diplomatic corp of Republic of Tajikistan, has be shaking they heads that the red shirts central government out Nassau has go with beggars cup in hand to the central government Freeport's Grand Bahama Port Authority looking for a land grant. {Why make this up?}. Didn't Minnis say from atop Mount Fitzwilliam on swearing-in day that, ‘It is the people’s time? How is it the people’s don't feel likes it's their time, and even some in the Imperial red cabinet are becoming weary the sincerity the PM's pledge to the people's.
What foreign constituency does the minister represent in the People's House of Assembly?

Mr. Pintard should watch his language "Junkanoo groups will have to contribute" he says Mr. Pintard let the building begin. put the money where your mouth is eight? As soon as you finish the first one in 2018 all will rejoice.