Activists Call For Rolle To Step Down 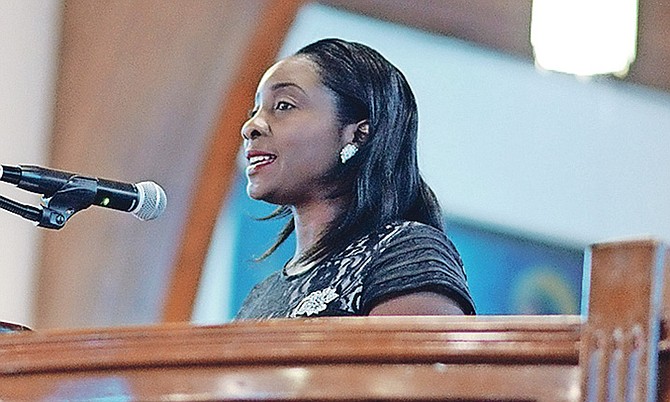 RIGHTS Bahamas (RB) has condemned the “shockingly insensitive comments” of Minister of Social Services Lanisha Rolle on marital rape and called for her “immediate resignation”.

RB said as the only woman in Cabinet and particularly in light of her official role in providing for the welfare of the vulnerable, Mrs Rolle “should be ashamed of promoting a perspective that encourages assault against women”.

The human rights advocacy group added: “Clearly, she cannot continue in that role. For the minister’s information, rape is never a private matter and all forms of non-consensual sexual activity should be outlawed in any society that seeks to call itself a democracy.

“Nor is the matter up for debate, legally speaking. The Constitution of the Bahamas protects each and every individual from all forms of assault, including sexual assault and to the extent that statue law does not reflect this, it must be amended. Contrary to Rolle’s statements, there is no need for a wide consensus on this issue; the government must act in accordance with the Constitution.

“Nor can there be any question of protecting ‘the privacy of individuals and of marriages,’ as she puts it. In the same way that a person cannot physically injure or murder a spouse, then hide behind the veil of marital privacy, they cannot sexually assault that spouse with impunity. Marriage is a civil contract; it has no relevance in criminal law.

“Furthermore, as the minister of social services of all people should know, there exists in this society a very high level of intimidation and coercion – both religious and social – which discourages victims of sexual assault from speaking out. In such an atmosphere, it is all but impossible for women in particular to express their true feelings on such matters for fear of stigmatisation.

“While the government should always encourage consultation, it is the job of elected officials to move to protect victims who are intimidated into silence, regardless of public opinion. Women have a fundamental right to be protected by the law from all forms of assault.”

On Tuesday, Mrs Rolle told reporters marital rape was a “private” matter that could become public and shied away from taking a firm position on whether it should be outlawed. Instead she insisted the sanctity of marriage should be protected.

Prime Minister Dr Hubert Minnis told ZNS earlier this week he had no personal view on the issue of spousal rape, and when asked by reporters about the matter on Wednesday he said he was more concerned about Christmas.

Meanwhile, RB also said it was disturbing that Attorney General Carl Bethel said he must consult with the Bahamas Christian Council before any laws on spousal rape or sexual abuse are enacted.

“This unofficial body has no statutory or constitutional relevance and its opinion should carry no special weight, particularly when it comes to any question of fundamental rights and constitutional law,” RB noted in a press release.

“Finally, we admonish the prime minister that his equivocal, non-committal stance on this issue is doing far more harm than good. He cannot continue to dodge. We encourage him to stand and be counted among the enlightened and progressive statesmen who, in their time, did the right thing in protecting and empowering the most vulnerable in society.”

Ok RB don't want anyone to listen to the BCC but we should listen to you?

RB is not even willing to listen to the Government ......... It's a law unto itself that answers to the OECD and UN liberalist agenda ............ Minister Rolle answers to Bahamians.