Butler-Turner Out Of Party If She Nominates As Independent 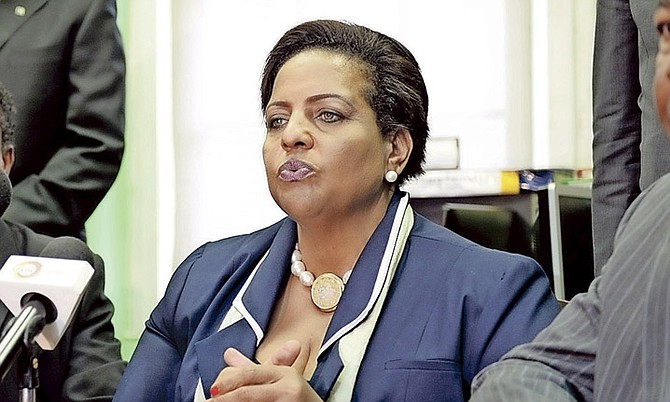 THE minute Official Opposition Leader Loretta Butler-Turner nominates herself as an independent candidate for Long Island she will no longer be a member of the Free National Movement, the party’s Chairman Sidney Collie said yesterday.

In an interview with The Tribune, Mr Collie said according to the party’s constitution, any FNM member that runs against a nominated FNM candidate “automatically disqualifies him or herself”.

Last month, Mrs Butler-Turner confirmed to The Tribune that her bid for re-election in Long Island during the upcoming general election would be as an independent candidate.

Last week, she posted a series of photos on social media showing her constituency headquarters in Long Island being repainted blue. She captioned the images with the hashtags independent2017 and campaign2017.

“She can do what she wants,” Mr Collie told The Tribune.

“Once she nominates she automatically disqualifies herself from being in the FNM, but right now it is just talk.

“I am not going to speculate whether she will actually nominate or not. We will wait and see what happens on nomination day. Politicians say lots of things, you cannot put too much stake in talks. If she nominates we will do what we have to do.”

In December, the FNM appointed a three-person tribunal to decide the fate of Mrs Butler-Turner and the six other members of Parliament who ousted Dr Minnis as leader of the Official Opposition in the House of Assembly earlier that month.

The party accused the group of MPs of bringing the party into “disrepute, division, rancour and dishonour” as well as signing, delivering and causing a letter expressing no confidence in Dr Minnis to Governor General Dame Marguerite Pindling to be read in Parliament.

When asked for an update on the progress of the tribunal, Mr Collie said the leadership of the party is staying out of the process.

“The rebel seven is taking care of that themselves,” Mr Collie said.

“We are watching them though. The tribunal has its own process and the leadership is staying out of it. I have not inquired about it.”

Attorney for the “rebel seven,” Michael Scott told The Tribune he also has “no idea” what is happening with the tribunal process because he gave the group “one set of advice” and they “took another”.

“I don’t know what is going on,” Mr Scott said. “I gave the seven certain advice and the leader of the opposition decided to take another course. So right now, I do not know what is happening.”

In an earlier interview, Mrs Butler-Turner told The Tribune there was no need for her to appear before the FNM’s tribunal - which she called a “kangaroo court” - on “trumped up” and “bogus” charges.

They are so obsessed with Butler Turner at this stage when they need to be focusing on the PLP. And no my comments are not confined to Collie's remarks here. Their minions are constantly focusing on one woman when they have an entire government to try to defeat.

“I don’t know what is going on,” Mr Scott said. “I gave the seven certain advice and the leader of the opposition decided to take another course. So right now, I do not know what is happening.”

Ah, so this is why he is brooding and suddenly bad-mouthing her around town; he is no longer able to get her to blindly follow whatever he tells her.

I thought that you know that is how FNMs typically behave. . ."don't do what I say. . .yoon no leader". . .no surprise here!

I'm going to bet she didn't foresee that either. #noplan

Wait. It just occurred to me how unethical Scott is as a lawyer in publicly commenting on deliberations between himself and his clients. If his clients have not instructed him to speak on this matter as pertains to them, he ought not be doing so.

Lol. I tell dem to write the GG long time

There is no way Loretta Butler-Turner is going to sit out this election. Remember her whole rants and raving exercises against Minnis was to become leader of the FNM and get more power. So there is no way she is going to not run this election and be a seatless wonder for the next five years. Her alliance with Branville McCartney and the DNA seems to not allow her a nomination in that party even after getting Branville in the senate as opposition leader. Her idea of forming a new party does not seem a good idea after all. Her chances of being let back in the FNM and getting a nomination are slimmer than an ice cube surviving in hell. So either she has to break ties with the FNM and run as an independent or break ties even more and join with the PLP. They will welcome her with open arms as they will view it as a further weakening of the FNM and as a chance to silence one of the most vocal opponents.

Don't give her any ideas lol!

Butler-Turner is a walking dead politician ......... she won't get 200 votes in Long Island regardless of what symbol or colour she runs under in the 2017 election

WE NEED AN ARTICLE TO STATE THE OBVIOUS? WAIT I FORGOT EVERYONE HAS A "D" AVERAGE.... THANKS ROMEY...

I have to wonder from where Mr. Scott obtained his political qualifications. Oh, sorry, thats right, lawyers are automatically political geniuses.

Now that LBT will run independent. . .Branville McCartney will be the worker" for rocin doc aye? His hold on power can be used to "sting" him good. . .he must resign. . .be fired. . .or form a coalition. . .either way. . ."doc chap him in he head with one of them rocs too". . .then Mr. Moncur will get fired for just plain being a "pain" and a poor reflection of a Senator. . .what a mess!

Tennyson has been out of the FNM forever now under the same provision of the party's constitution, but that did not stop Minnis and Co from elevating him and his plans above their own Parliamentarians. Is anyone else as tired as I am of even thinking about the FNM at this point, much less discussing them?

Pleas talk sense. . .not "sour-puss" FNMs dirty laundry talks. . .what you said up there makes no damn sense. . .run that by-we again please. . .this time lee out ya "FEELINGS HURT FNM" thingy there so we the public can know what the doc doing as well. . .if you want to make us hate him like you do. . .you can't talk to us like that crap up there. . .talk sense so we can make reasoned decisions based of empirical facts not yinna "anger feelings" against yall leader! You should by now that ween into yall around here who yinna leader can't pee and yinna don't think he doing something wrong. After all. . .yall was giving LBT as the better alternative to doc. . .even though we were telling yall then that yinna were not making no dang sense. . .yall saying one thing and he in public doing different! Lol!

How has she done so? As a politician she has proven. . .not rumored to be so. . .but publically proven to be a joke as a politician or leader for that matter. . . one who cannot take the pressure of high office. . .who will scheme, hook, whine, tantrum, not be a team player, impetuous, disingenuous, petty, play victim, lie, try to bull-hockey and haul azz when the going gets tough!! Now if there is another politician named LBT please let us know. . .but the Opposition Leader in the HOA now is no politician. . .or a leader. . .I believe that the LI folks will be hard pressed to commit their "things" for her to represent. . .

Comrade UserOne, I'd say that not only have Long Islanders got good reasons to see "Reheasa" as the MP that wears her heart on tip her fingernails - but on the balance of political probabilities since Papa Hubert entered her to run for the Montagu Constituency that on a balance of probabilities, she is viewed by many and for good reason as the perfect image of political mischief - and I'm being descriptively polite to the member for Long Island, okay.