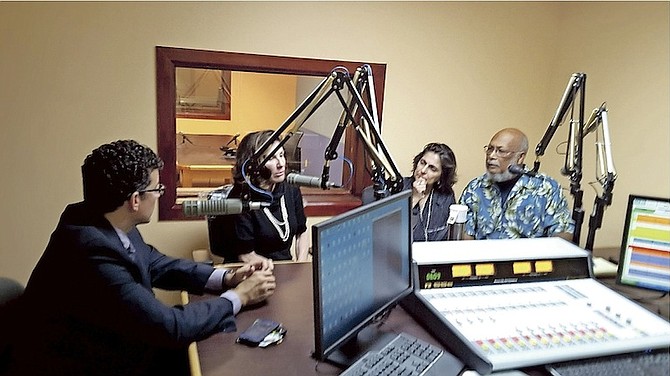 Pictured at Love 97.5 studios on the ‘Voice of the Bays, The Environment Speaks’ (from left) are Matt Aubry, Organization for Responsible Governance; Diane Phillips, FOIA liaison, Save the Bays; Sam Duncombe, re-Earth; and Joe Darville, Chairman, Save The Bays.

REPRESENTATIVES of civic groups that have been calling for strong freedom of information legislation have applauded the government for bringing an Freedom of Information Act to debate, declaring that with a few changes in the draft bill, the Bahamas could become a “world leader” in transparency.

Matt Aubry, executive director of Organization for Responsible Governance (ORG), Joe Darville, Chairman of Save The Bays, Diane Phillips, FOIA liaison for Save The Bays, and Sam Duncombe, founder of re-Earth, appeared on the radio show “Voice of the Bays, The Environment Speaks’ on Love 97.5 last week as the long-awaited bill was being debated in the House of Assembly.

“I want to applaud and to thank the government of The Bahamas for taking this important step that the people of this great nation have long waited for,” said Mr Darville, who hosts the weekly show. “We know that the Freedom of Information Bill as presented is not perfect but all the experts who have looked at it and compared it with others that are considered strong and true Freedom of Information Acts have said that with a few basic changes in the act, the Bahamas could become a world leader in transparency.”

According to Mr Aubry, the Bahamas is in a position to benefit from true freedom of information legislation that is enjoyed in many other countries, citing Bangladesh, New Zealand and the Cayman Islands as examples. “In studying the various versions of the proposed bills we have gotten tremendous insight and support from experts like Lemarque Campbell, of Transparency International, and Lisa Benjamin, at The University of The Bahamas, who sat on the commission advising government on the legislation,” he said. “Representatives from many of the civil society and private industry groups pored through the proposed 2015 draft of the bill, studying it line by line against the 2016 version. Of the 31 recommendations made in the review of the 2015 Act, 17 were adopted in the current act that the members of Parliament are debating today.

“We are very grateful that the Commission considered and incorporated these recommendations. However, we still see some key areas that need to be addressed to ensure that the bill is strong and represents the right of the public to gain access to information.”

Among those, said Mrs Phillips, were the calls that went unanswered for an independent Information Commissioner to avoid the perception or the reality of a conflict of interest that would arise if the Commissioner is a political appointee. She also said those who studied the bills and compared them with adequate or strong legislation from other countries said the time for both a reply and for the provision of information needed to be shortened. “Under certain circumstances, it could take up to 104 days to get an answer as to whether information will be provided,” she noted. Recommendations also call for 15 years instead of 30 years for sensitive information to be declassified.

But the aspect of the legislation that has drawn the most commentary, the radio guests said, was what the current act does not apply to - non-statutory bodies or public private partnerships.

“So we would not be able to find out how a contract was awarded for BPL or why the BEST Commission made a decision it did, or how our tax money or fees we are required to pay are being spent by NAD or who is benefitting from contracts at the port,” said Ms Duncombe. “Either we are going to have an end to these secret closed door deals or we are just kidding ourselves. But I am glad that we are moving in the right direction and that government is listening to the demands of the public that is getting better organised.”

“This is an historic time as we stand at the crossroads of a culture shift, moving from a society which prided itself on secrecy and confidentiality in banking and in business to a state of transparency, so that all citizens will have the right to information that impacts their lives and the lives of their children and grandchildren,” said Mrs Phillips. “I’ve said before that 2016 was the year that Bahamians found their voice and now 2017 will be the year that the voice grows louder. These groups uniting behind issues like freedom of information are more than 100,000 people strong and you cannot ignore those numbers, especially in an election year.”