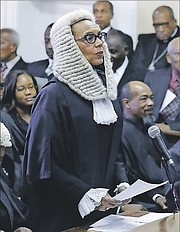 ATTORNEY General Allyson Maynard-Gibson yesterday boasted of the success of the reimplementation of Swift Justice, claiming a four per cent increase in conviction rates for 2016 compared to the previous year.

Mrs Maynard-Gibson, QC, in addressing Chief Justice Sir Hartman Longley and legal officials gathered at a ceremony to celebrate the new legal year, said the Office of the Attorney General had a 67 per cent conviction rate in 2016.

She added that last year, the conviction rate for murder trials was 75 per cent.

“The administration of justice in our country has seen a major transformation over the past four years as a direct result of Swift Justice,” Mrs Maynard-Gibson said.

“The new process for the review of files before persons are charged has resulted in a 67 per cent conviction rate – which has more than doubled from 2012 when it was 31 per cent,” she said.

“We think that persons should be charged with offences only if the prosecution believes that, based upon the evidence at the time of charge, a reasonable jury will convict. With the leadership of the director of public prosecutions, collaboration with the Royal Bahamas Police Force and other justice system stakeholders, this new approach and these dramatic results will make our streets and homes and communities safer. Over the last year, in 2016, the conviction rate for murder trials was 75 per cent.

“In the past, witnesses to crimes and the families of victims were victimised again, forced on an emotional roller coaster, because of successive adjournments of hearings, including trials,” she added. “That has changed, in a big way: the time to present a voluntary bill of indictment (VBI) has decreased to 67 days in 2016 - down from 344 days in 2012. In pursuit of justice, the team of prosecutors in the Office of the Attorney General has been working diligently to move cases forward swiftly.”

Mrs Maynard-Gibson added that the new criminal courts and new systems of preparing cases for trial “are ensuring that closure comes more quickly for the victims of crime and their families” and that “trials that occur six to 10 years after charge have become a thing of the past.”

She said that there is reason for optimism if the disposal of matters is the yardstick by which the efficiency of the administration of justice is measured.

“Aside from last year during which there were setbacks like Hurricane Matthew, the number of cases disposed of has increased year-by-year since 2012. In fact, 2015 was a landmark year, as the Supreme Court disposed of 232 matters.”

“My Lord, I respectfully suggest that 200 should be set as the minimum number of matters annually to be disposed of by the Supreme Court. This is a reasonable expectation. Anticipating 40 working weeks per year, with the cooperation and collaboration of all stakeholders, the court can achieve it by efficiently managing its time and resources, and accepting that properly case managed trials should not take longer than two weeks.”

“In fact, given what was achieved in 2015, surely 200 cases disposed of is a conservative target,” the attorney general said.

Crooked Christie and the Evil Wicked Witch Maynard-Gibson are liars of the highest order and therefore anything they say should never be believe or endowed with a scintilla of truth.