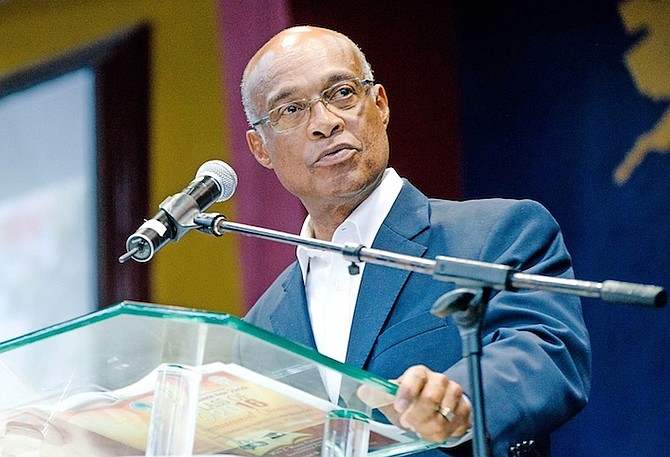 FORMER Baha Mar Leadership Development Institute Executive Director Jeffery Lloyd yesterday called reports that an estimated 1,500 people applied for or inquired about jobs at the once stalled Cable Beach resort on the first day of the process “alarming” and “significantly low”.

Mr Lloyd, the Free National Movement’s South Beach candidate, said the pairing of the $3.5bn project’s past failures and the Christie administration’s extensive involvement with the resort’s recovery has deterred potential applicants.

On Monday, Robert Sands, Baha Mar’s senior vice-president of government and external affairs, told The Tribune that the company’s website careers.bahamar.com and “social media and Facebook” saw over 1,000 applications and over 500 inquiries respectively as of 4.30pm that day. By yesterday, Mr Sands told Tribune Business nearly 4,500 applications had been received, a response he described as “overwhelming and extremely encouraging”.

The first day’s level of applications surprised many involved with the project, with Mr Lloyd commenting that the current status of Baha Mar leads many to believe that the resort will not succeed.

Comparing the numbers reported by Mr Sands to the initial launch of the LDI project in 2013, Baha Mar’s initial hiring phase, Mr Lloyd said his team was bombarded with far more applicants when they promoted far fewer jobs.

“Their returns on their actions this week is significantly low compared to what was done in 2013,” said Mr Lloyd. “When we were advertising 150 positions there were over 5,000 people who responded - the return was massive. We went into communities and thousands showed up to seek employment opportunities.”

Mr Lloyd remarked that the “less than significant response” illustrates that Bahamians, particularly youth are “disgusted, disappointed and distrust everything the PLP are involved with”.

“I don’t need to guess with this,” Mr Lloyd added. “A project of this magnitude should captivate everyone. In a country where the unemployment rate is where it is at, you’re telling me that those persons without jobs aren’t pushing to get these new jobs?

“No one is convinced with this project. People don’t believe that it will open successfully and be safely contracted in the 13-week window proposed. No one wants to go near this because the government has jilted everyone once intrigued by it.”

“The hirings are to facilitate the phased opening of 1,800 rooms at the conference and casino hotel, the casino, convention centre and golf course, and employment of up to 3,300 by August 2017, and 4,300 by December 2017, when all companies have been completed and opening,” the prime minister said.

Resort officials are “very optimistic” that the resort will hit its April 21 “soft” opening date.

People don't trust it and lost their faith in the project. I know several people who resigned their longstanding posts after they applied to Bahamar the first time and got 'hired'...only to have it blow up in their face and put them under immense pressure financially. Thinking people are going to be WAY more cautious this time around.

I presume they will not be able to exceed or match that this time around, as some now understand how this game is played. Keep your job and don’t risk it on this mess. If you don’t have a job, it's an opportunity.

This opening is also turning out to be something of a political trick (what do they mean by soft opening or was it “very soft opening”?). Either way, the biggest problem with Baha Mar is its sustainability after it “really” opens. Election is around the corner...

Roberts Sands is also a very slimy one.

Do not forget former Deacon. , He should be able to find something of more substance to comment on. Why does he seek to compare how many persons have applied for jobs at Bah Mar. It is his hope that this project will not succeed. But it is all in the hand of God those who find employment it will be good for them. And Former Deacon Loyd will have hand it it at all. Him , nor the wash house man

The former Deacon nor the Wash house man wants Bar Mar to succeed, But it is out of their hands.

Birdie, your grammar is as feeble as your thinking.

Guess they fear the prospect of having to brave the Jeff Lloyd courses.

It may have to be a case of 'holding on to the edge of the pool while trying to learn how to swim' with Bah Mar. many people may not be ready to cut ties with a current job based on past experience with the project. This may mean that, at least in the interim, Bah Mar may not be able to attract the best and the brightest. And remember too that with their last recruitment exercise they also urged Bahamians abroad to come home and become a part of Bah Mar nation. Many did and were left in the wilderness. Hopefully something good will come forward this time, thousands of Bahamians will be securely employed and the project will exceed even the greatest of expectations.

I hope for the sake of the country that Baha Mar succeeds; however, I doubt the project will ever regain the vibrancy it had under Izmarlian. China won't be overly concerned about the resort maximising its potential - it is more concerned with having a stranglehold over the Bahamian economy and our government.

It will also be interesting to see if they can find the talent they need to come from outside the Bahamas. This type of a project needs executives with relevant experience and player development people with relationships with high end players. The ex-pats who uprooted their lives to move to the Bahamas also got left high and dry, and it will be difficult to attract people to jobs after that. So I expect that there will be a lot of Chinese management brought in.

When china mar opens power supply will be dismal.The new power plant will be built and run by chinks.

the Chingrets and the PLP burnt so many people the first time - i bet most of the people (less 1500) probably quit working in hospitality period...

With a country the size of The Peoples Republic of China with its huge population, if all else fails the Chinese Communist Party will be able to use the Baha Mar resort as a type of "reward vacation" for its most loyal and productive workers in much the same way that the former USSR built huge resort complexes where their 'Heroes of Soviet Labour" were sent for all expenses paid vacations as a reward for turning up at work and reducing their on the job consumption of vodka.

Does Lloyd know that they now say over 5,700 people in total have applied since Monday? It seems Lloyd was more interested in making the snap point that he was on the Baha Mar team under Izmirlian instead of waiting to see what the total response would be before commenting. He is overestimating the level of struggle out there and how that would affect the decisions people ultimately make. People who need jobs are invariably going to apply. Yes, there may be some who may decide not to because they don't want to get shafted. But that will only be a minority of people. It is just like the many who have signed temporary contracts with the government. Clearly the contract says they would only be guaranteed work for a few months, but don't they take the job anyway? These guys in politics really need to get in touch with how the average Bahamian truly thinks and sees things.

Generally speaking in a hiring process of this size and complexity one would have to not only start MUCH earlier to Gtd the best qualified and those with most potential and quality along with time for appropriate training. If you are not looking for top tier service levels to attract tourist, ok and so be it and you will not offer the hospitality that the Bahamas professes to have. That being said, one can also account for 60-65% attrition of the applicants for so many reasons so yes, the number is very low.