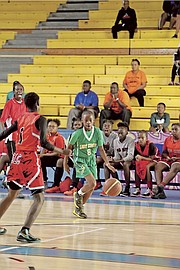 THE Bahamas Association of Independent Secondary Schools basketball championship series tipped off in all four divisions at Kendal Isaacs Gym last night. Game two in each series is scheduled for 4pm Wednesday.

For the past two seasons, the SAC Big Red Machine were eliminated before they could reach the BAISS junior girls’ championship series, but this year’s team regrouped and now stands one win away from a division title.

Karolyn Baptiste scored a game high 19 to lead the Big Red Machine’s offensive attack and her team led by double figures nearly the entire second half.

“It feels good to win game one, we played alright but I feel we can do better. Our offence was good but to be better we need to play better on defence. Our defence starts our offence so we need to have both sides going to win,” she said.

The high scoring guard was definitive on how she expects game two to play out.

SAC took an early 4-0 lead and led 6-2 on a Baptiste layup. The Comets finally scored on a steal and fastbreak layup and added another layup on the ensuing possession to make the score 6-4 at the end of the first quarter.

The Big Red Machine opened the second with a deep three- pointer. The Comets were able to respond for much of the period and remain in contention.

Both teams traded baskets over the next few possessions and a Comets corner jumper pulled them within two, 9-7. Baptiste would have the answer for SAC on a steal and fastbreak layup as the Big Red Machine took a 15 -9 lead into the half.

Baptiste scored 13 of her 19 points in the second half to seal the game one win.

Early in the third she weaved through the defence with a euro step to convert a layup and three point play to give the Big Red Machine a 10 point lead for the first time. They led by as much as 13 in the period and withstood a brief flurry from the Comets to take a double digit lead into the fourth.

Comets came within seven late in the fourth, but as their coach Anastacia Sands-Moultrie shouted from the sidelines for much of the game, the Big Red Machine clamped down defensively to take game one.

The Comets face an uphill battle if they wish to repeat as champions.

In 2016, the Comets closed out a two game sweep over the Kingsway Academy Saints in a 22-20 thriller to take the title, led by head coach Chadwick James.

After witnessing both boys teams capture basketball titles in 2016, the Jordan Prince William Falcons look to add their names to this year’s winner’s circle.

It was a dominant performance from the Falcons’ balanced scoring attack to take game one of the Senior Girls series.

Robyn Porter was dominant on the interior with a game high 12 points to lead the Falcons while Terell Cox scored eight and Amir Thompson added seven.

It was tied early at 4, before the Falcons moved ahead on three pointer and eventually took a 9-4 at the end of the first.

Deadlocked for most of the second, the Falcons ended the quarter on a 6-0 run to take a 15-10 lead into the half.

The Falcons had a key run early in the third that put the game away for good sparked by a jumper from Cox.

They stole the inbound on the ensuing possession and after a pair of layups from Porter and another from Shamique Thompson, the Falcons had an 8-0 run.

Even with Porter on the sidelines, the lead ballooned to as much as 18 on a Thompson layup.

The Kingsway Saints finished as runners-up to the SAC Big Red Machine last year and were early favorites for this year’s title, but the Falcons have been a force all season intent on spoiling those plans.