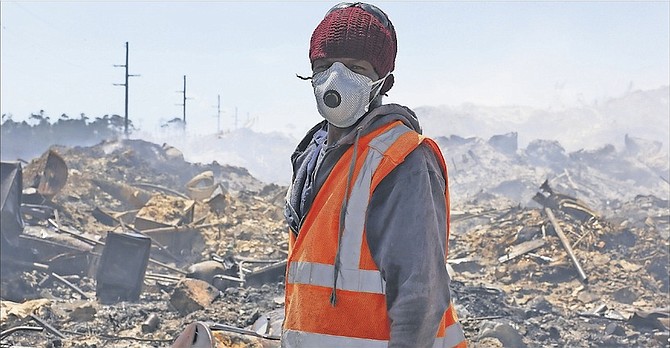 A worker in a protective mask at a dump fire earlier this year. Photo: Terrel W. Carey/Tribune Staff

EIGHT years after the Inter-American Development Bank (IDB) funded the development of solid waste management infrastructure in the capital, key targets on building awareness have yet to be fully realised, according to IDB country representative Maria Florencia Attademo-Hirt.

Ms Attademo-Hirt told The Tribune that impacting the culture of waste management in The Bahamas will take a long-term commitment to building awareness, as she weighed in on the efficacy of the bank's public sector loan to spur reforms in the late 1990s.

In a statement issued recently, the bank acknowledged that although the integral infrastructure was developed, operational management and support has remained inadequate throughout the past 18 years.

"In 1999, yes, the IDB approved a public sector loan for solid waste management," she said. "That 1999 loan was basically focused on the landfill in New Providence but also on the landfills in the Family Islands. That project had an initial period of execution of five years and it was extended.

"Typically, the execution period for public sector loans tend to be five years, what happens when you're about to come at year four or five between the government and the bank, we look at the project and we say is it justified? In the case of the 1999 loan, I understand that that kind of dialogue took place and an extension was granted to try and accomplish a little bit more than what was being accomplished by year five."

Ms Attademo-Hirt said: "I would have to tell you that that project from my point of view did not accomplish all of its intended objectives, it did accomplish a good amount. Was there room for improvement? Absolutely."

Ms Attademo-Hirt was responding to questions asked by The Tribune related to the monitoring and evaluation of IDB-funded projects as the bank's current five-year country strategy comes to an end.

It follows criticisms levelled by pundits who, in the wake of recurring fires at the New Providence Landfill, contend that the bank's $23.5m loan for a solid waste management programme in New Providence was not fruitful.

This loan was approved in February 1999, during a previous Ingraham administration, and the loan contract was signed in October of that year.

The loan was intended to support existing government programmes in a bid to improve solid waste management in New Providence and on several Family Islands.

The project is listed as finished on the IDB's website, and project details indicate a cancelled amount of USD$1,689,746, repayments totalling USD$17,308,414, with some $4.5m listed as outstanding.

The programme was preceded by two loans for technical cooperation. The first loan contract, valued USD$750,000, was intended for the preparation of pre-feasibility and feasibility studies for a solid waste management project, and was signed in February 1995. The second loan contract was signed in May 1997 with a total value of USD$100,000.

Ms Attademo-Hirt said: "I believe at the time . . . it was a very comprehensive project, a very ambitious project. I do also believe that that project started the change in terms of waste management. Some of the things that were not accomplished and that perhaps are not fully accomplished till this day eight years later, and many years after we finished the implementation in agreement with government.

"Like, awareness - one of the components of the project was about creating awareness in the community about the importance of effective, efficient, conscious I would say, solid waste management.

"I believe there is room for more there," she continued. "I don't think that process has been completed. Is there ever a point in saying a society is fully aware and ready? I don't know."

Reflecting on her childhood experiences in Argentina, Ms Attademo-Hirt said she could personally attest to the cultural shifts that can be effected through consistent awareness-building over decades.

"I am from a developing country, I grew up in a country where tossing a piece of paper out of a car window was socially okay. I also saw in my teen years, and now going back as an adult, a country that has turned the page there and it's not ok culturally or socially anymore to toss things out of the car.

"These processes of change take decades, because you have to make a mind shift not only of certain leaders in government and civil society, but of a nation.

"So yes, I do believe that some of the objectives of that project were not fully met. I do believe there is room for improvement, absolutely, in the awareness or in the recycling, in the management itself of a landfill. However, I am happy that the project took place even if it was imperfect because I believe it was a vehicle of change," she said.