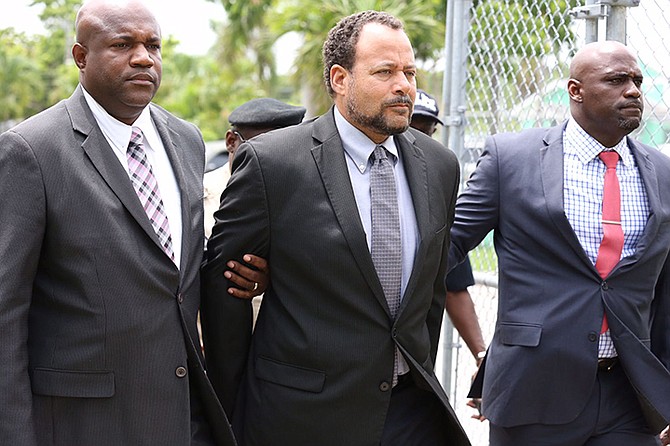 Friday's update on this story can now be read HERE.

UPDATE: Due to court documents not being ready, Frank Smith's arraignment has been adjourned till Friday. He will remain in custody until then.

UPDATE: Former Senator Frank Smith will be charged in court this afternoon with several bribery and extortion charges, according to Assistant Commissioner of Police Paul Rolle. More news to come.

FORMER Progressive Liberal Party (PLP) Senator and member of Parliament Frank Smith was taken into police custody and questioned yesterday in connection with an ongoing fraud probe, The Tribune understands.

Mr Gomez, who is also the PLP’s former minister of state for legal affairs, said Mr Smith will be held overnight.

In an interview with the press, Mr Gomez said he is confident that his client will “prevail” in the end.

“The questions appear superficially to relate to government, they really concern private loans that persons who probably don’t want to pay their lawful debts are now hiding behind a scam. There is no allegation of bribery and I have no concerns about his innocence,” Mr Gomez said outside CDU.

“I am confident he will prevail in this...Of course we are concerned that political abuse of power is behind this and we will deal with that at the appropriate time.”

Mr Smith is the third member of the former Christie administration to be questioned by officers in two months.

In May, Dion Smith, the former deputy speaker of the House of Assembly, was taken into custody in connection with a probe into “theft by reason of employment” at the Bahamas Agricultural and Industrial Corporation, which he headed under the Christie administration.

Mr Smith, who represented Nassau Village from 2012 to May of this year, was released from police custody without being charged.

He was the ninth person arrested, questioned and released in connection with the matter; however, no formal charges have been brought against anyone.

Assistant Commissioner of Police Paul Rolle, head of the Royal Bahamas Police Force’s Anti-Corruption Unit, told reporters last week that the investigation at BAIC was complete and police found no evidence of wrongdoing.

Mr Smith vied unsuccessfully to receive the PLP’s nomination to represent Free Town in the 2012 general election but was passed over for attorney Wayne Munroe, QC.

He was elected to the House of Assembly in 2002 to represent the former St Thomas More constituency.