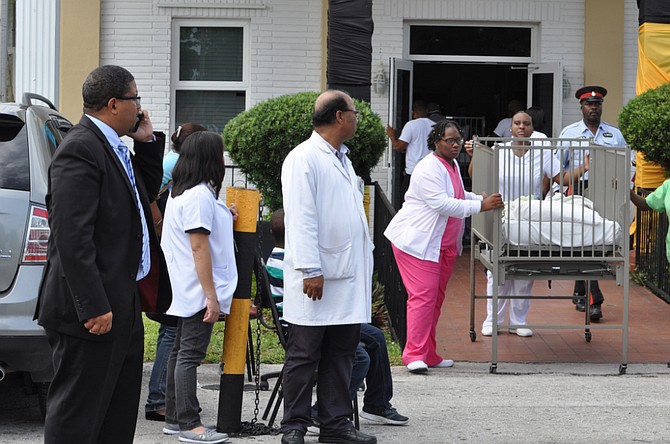 Patients are evacuated from the hospital as Deputy Prime Minister K Peter Turnquest looks on.

Patients evacuated from the Rand Memorial Hospital by Tribune242

A fire at Rand Memorial Hospital on Friday afternoon forced the evacuation of nearly 50 patients and left a physician hospitalised with mild smoke inhalation.

Two other hospital staff also suffered smoke inhalation but were treated and discharged.

A total of 48 patients in all were safely evacuated from the hospital’s wards. Eleven intensive care patients, including five special care newborns, one obstetric patient in active labour, and five ICU adult patients - were transferred to the Sunrise Medical Center.

Two of those ICU patients whose condition was described as very ill are expected to be airlifted to Nassau.

Patients evacuated from the fire (left) and (right) the fire in the Rand's kitchen.

The remaining 37 stable patients from Pediatric, Medical, and Surgical, Obstetric areas were taken across to the Christ the King Church, where they are being temporarily housed and managed by physicians and nursing staff.

Prime Minister Dr Hubert Minnis flew to Grand Bahama from Abaco to meet with patients and to assess the damages at the hospital, along with Deputy Prime Minister Peter Turnquest and Minister of Health Dr Duane Sands and MP Iram Lewis, parliamentary secretary in the Ministry of Works.

According to reports, shortly after 2.30pm, the deep fryer in the kitchen caught fire, but kitchen staff were unable to extinguish the blaze.

The alarms were activated, and fire services arrived at about 2.48pm.  As smoke spread to the wards, nurses and other staff wheeled patients outside in their beds to safe designated areas.  The newborn babies and pediatric patients were evacuated outside at the eastern side of the hospital.

Police had cordoned off a portion of East Atlantic Drive from traffic as patients were wheeled across the street to the nearby Christ the King Church.

Photos of the kitchen fire and patients being evacuated were posted on social media.

During a press conference at the hospital, Health Minister Dr Duane Sands informed reporters that no injuries or casualties resulted during the evacuation process.

He stated that the fire was confined to the kitchen, and that staff and patients were evacuated to designated areas primarily because of smoke throughout the hospital.

Minister Sands commended hospital staff for the “incredible performance” and response in rescuing and evacuating patients.

“God is good, we were fortunate that there were no serious injuries to any patients, but more importantly we have seen phenomenal dedication and professionalism by the staff at RMH," he said.

“The staff who put themselves in the line of fire to rescue every single patient, some of them having problems with smoke inhalation, speaks to professionalism and dedication,” the minister said.

“I want to go on record commending the staff, administration, doctors, and nurses not only at the Rand but from Fire Services, Police Department and everybody who has assisted.”

The estimate of the damage is not known, but Dr Sands indicated that the kitchen is out of operation and that provisions have been made to provide food for staff and patients from local vendors.

“Initial reports suggest that the damaged sustained was not extensive and it is anticipated that resumption of services should be in short order,” he said.

In addition to the fire damage within the confines of the kitchen, there is also smoke damage to the ceiling and damage to the electrical wiring. Smoke has also permeated significant parts of the wards in the area.

When asked whether fire extinguishers were on hand in the kitchen when the fire broke out, Dr Sands said that there were, however, given the magnitude of the blaze staff were not able to contain it and so fire services were called in.

Cleaning has started, and some patients may be returned to the hospital on the weekend.

Herbert Brown, managing director of Public Hospitals Authority, said that mock emergency exercises for staff are ongoing at the Rand.  He stated that they are satisfied with the staff's response and execution of the hospital’s disaster plan.

Due to the fire, the hospital has made changes in service delivery. Non-urgent cases should seek care at the Outpatient Specialty Clinic on Coral Road and the Eight Mile Rock Clinic until further notice.

Prime Minister Dr Hubert Minnis, along with his team, was in Abaco when he got news of the Rand fire.

“I was in communication with the Minister of Health and the Deputy Prime Minister who kept me abreast, but I thought it was important for me to be here and lend my support and show how important Grand Bahama is," he said.

''I want Grand Bahama to be assured, regardless of the cost, we will have the Rand back on its feet in very short order."

No sprinklers or fire estinguishers ?

Thank God everyone was safely evacuated.

A DEEP FRYER in a HOSPITAL kitchen?

Amazing. Freeport is in a severe economic crisis and our PM has yet to visit here to deal with that but he comes for a minor kitchen fire?!?!?

This government is scaring the hell out of me....

Kudos to the Rand staff ........... Freeporters have something new to belly-ache over now ...... DocMinnis will deliver yall soon