Hield: I Have To Give Back To The People 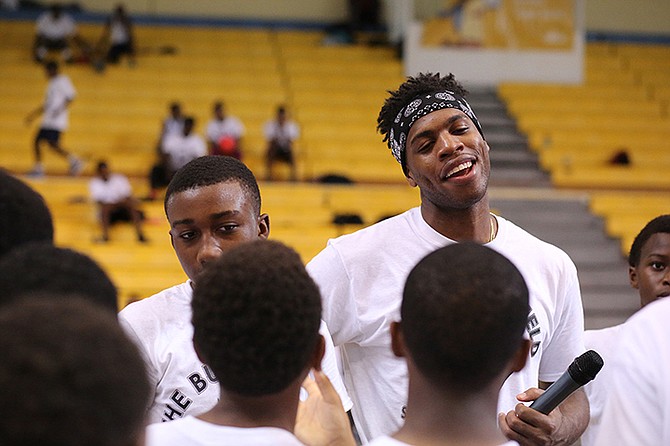 The inaugural Buddy Hield Workshop and Tournament featured several surprises, standout performances and a few surprises over the course of the two-day event last weekend at the Kendal Isaacs Gymnasium.

"It's great you know, the kids were able to come out and have fun. It's great to come back, have fun with the kids. It's not about me, it's really all about them and making sure they have opportunities to be exposed to some things that can benefit them in the long run," The Sacramento Kings guard and Grand Bahama native said.

Day one of the event hosted over 300 aspiring students through a series of drills and skill position development hosted by Hield and his team of personal coaches from the United States. It also featured an appearance by Prime Minister Hubert Minnis. Day two featured a series of exhibition scrimmages between camp participants, a three point shootout, slam dunk contest and a "Battle of Champions" in the senior boys division between the GSSSA champion Anatol Rodgers Timberwolves and the BAISS champion Jordan Prince William Falcons.

"Being where I come from, sticking to my roots, everyone seeing me all over television, giving it back to them is important and seeing one of their own giving back is a big deal. I'm just trying to inspire kids to be the next Buddy Hield."

The Falcons won the matchup 54-52 after a series of late game blocks from Adam Johnson to secure the win. Johnson was named the MVP after posting 17 points, 17 rebounds and seven blocked shots.

Last summer, Hield hosted his "Buddy Hield Invitational" an exhibition between some of the top high school players in the country. Johnson and Roker were also winners at that event.

Hield said the goal of the weekend was to establish a trend aimed at toward providing a lasting impression on the players.

"You want to teach them something, you want them to walk away with something. The guys that I brought down are the guys that work out with me and they helped me to get where I am today," Hield said, "We want to teach the kids how to get better, how to play basketball and it's not going to the gym and just trying to dunk every time or just shoot. You have to see yourself doing it, you have to believe you can do it. We wanted to drill them, push them to the limit, test them. Basketball is not for everybody, but if you want it, you can get it. I'm a big fan of giving back. My childhood was all about giving back wherever I can. The same way it was done for me as young kid growing up in Grand Bahama where people came and impacted my life I will be the same way, giving back, showing people we still care and helping the the community in some kind of way,"

Hield was named to the 2016-17 NBA All-Rookie First Team this offseason.

He became the 16th player in Kings franchise history and the 11th during the Sacramento era to earn All-Rookie Team distinction, a list that includes teammate Willie Cauley-Stein (2015-16 All-Rookie Second Team).

He played 57 games with the New Orleans Pelicans before he was traded to the Kings in February. In 25 games for the Kings, Hield made 18 starts and averaged 15.1 points and 4.1 rebounds per game and 42 percent shooting from three-point range. On the season he averaged 10.6 points, 3.3 rebounds on 42 percent shooting from the field and 39 percent from three-point range. He finished fourth in 3-point and free throw percentage, eighth in field goal percentage and 11th in rebounding among all rookies.

"Basketball will not last me for 30 years but the impact I can have within the community can go on and on through others and that's what events like these are really about," he said.

Hield's time back in the Bahamas will also include a week of activities in Grand Bahama dubbed "Dream Week."

Dream week will begin July 31 with a two day camp at the Jack Hayward Gymnasium and Pinedale basketball courts. Thursday and Friday will feature a tournament and the week ends on Saturday with a Hurricane relief concert.

"God has blessed me and put me in a position where I can help someone, where I can reach out and show someone somewhere that people still care. I'm just trying to do whatever I can to help my people. This is going to be an annual thing every year," Hield said, "I grew up less fortunate, I know what its like and now I have it so I can help those in a position I was in. Right now we are just taking it step by step and eventually we can grow to get bigger and better."