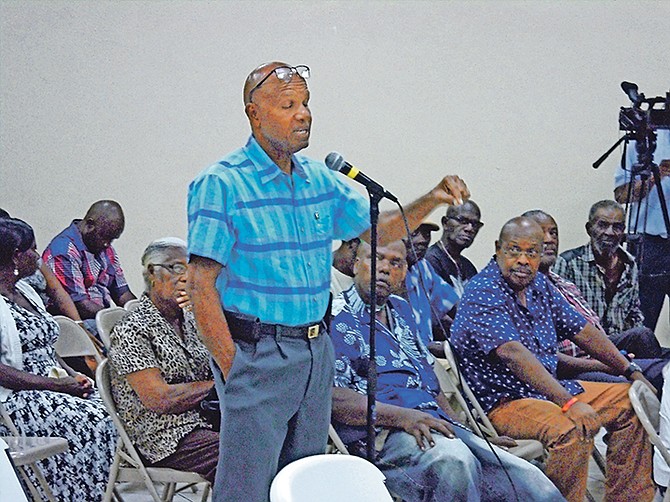 THE residents of Pinder's Point and the surrounding communities in Grand Bahama are not happy with the final draft of a safety risk assessment and e-nose studies that were undertaken by the previous Christie administration.

They believe the studies do not adequately address the actual extent of the safety risks and the dangers to residents about the chemical emissions from the nearby industrial businesses and a possible catastrophic event.

"A lot of what is in the report we disagree with," said Grand Bahama Environmental Association President Bertram Pinder.

The GBEA held a town meeting Tuesday evening at the Upper Zion Church in Pinder's Point to share the details of the reports with the residents, who packed the church hall to hear the findings of a safety risk assessment conducted by the Antea Group, and the e-nose assessment study by Common Invent BV.

The new Minister of State for Grand Bahama Kwasi Thompson provided the reports to the GBEA, the Grand Bahama Port Authority, and to the various industries in the Industrial Park.

The association said that it was very grateful to Mr Thompson for doing so, and would be requesting a further meeting to discuss with him their concerns about the reports.

"We will make our recommendations because a lot of what is in the report we disagree with, and we are not surprised because we anticipated that, but we are not deterred by it," Mr Pinder said.

Mr Pinder said that the GBEA believes that the results of e-nose assessment are flawed.

"The monitors are…not measuring the level of the air at the human level and so the results are flawed," he said.

E-noses have been installed in the communities of Pinder's Point, Lewis Yard, Hunters, Wellington Pinder Heights Subdivision, at the NEMA warehouse, and other locations.

According to GBEA member Shuffel Hepburn, the devices are supposed to be installed at the height of four and a half feet but are instead placed at heights of 12ft and 16ft.

"These monitors do not give a proper, accurate reading of the air quality of the residents, " he said.

"We are thankful that Minister Thompson invited us to a meeting and gave us a copy of the report, along with the industries and the Grand Bahama Port Authority, and that is all we expect. We have not been getting that kind of respect in the past (from the former administration), and we look forward to continued dialogue and achieving our goal," Mr Hepburn said.

He stated that the group's goal is the relocation of the residents, but also noted that individuals want redress for the impact the pollution has had on their lives.

"They feel they have been disadvantaged and that damages are owed for lost loved ones, and some of them are not well," he said.

Mr Hepburn stated that during the end of the Ingraham administration's third term discussions were held between the Grand Bahama Port Authority, government, and the industries of providing another location for all the residents as opposed to everyone going in different directions.

Mr Hepburn said the study did not cite the presence of gasoline tanks near the homes of residents and did not give more information about risks of smoke to residents in the event of a tank fire. Mr Hepburn also said that there is no mention of Seaco Town and the Hawksbill communities in the report.

Mr. Hepburn you promised to meet the PLP at the polls and you and those who follow did. But it has not changed the report. now you should tell the FNM Government to relocate the people right away that is the least they can do for you..

So you do not like the report even if an FNM reads it. Trouble maker leading poor people along a path to nowhere.

Sounds like he's bucking to be a union leader and then the dream of all dreams (shane's dream) to be the minister of Labour!!!!

putting the monitors way to high...... that does stink sounds like Fitzy and Rubis all over again.....