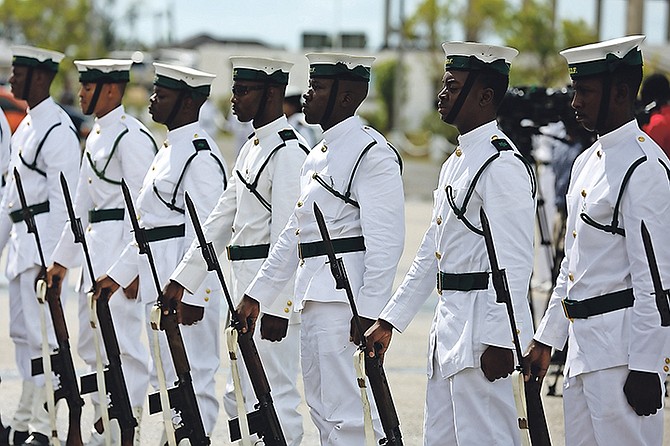 RBDF officers at a handing-over ceremony yesterday as the former Commodore of the RBDF, Roderick Bowe, gave his last remarks and the newly-appointed Commodore Tellis Bethel took the highest position of a naval officer. Photo: Terrel W. Carey/Tribune Staff

PRIME Minister Dr Hubert Minnis pledged yesterday to conduct a review of Royal Bahamas Defence Force salaries to ensure officers are adequately paid for their work and to complete the RBDF's Sandy Bottom Project during this term in office.

He further pledged to make provisions for an extension of contractual terms for qualified senior enlisted personnel who are required by law to retire at age 55.

The Killarney MP made these remarks during his address to observe the RBDF's change of command ceremony where Commodore Tellis Bethel was officially acknowledged as chief of the force following the retirement of former Commodore Roderick Bowe.

Commodore Bethel was named to the post following a massive promotion exercise of 427 officers on May 2, days ahead of the May 10 general election.

His confirmation came more than two years after he began serving as the acting commodore of the RBDF. His position was made retroactive to March 2015.

"I want to assure you that as prime minister and as chairman of the National Security Council that you have the full support of the Bahamas government," the prime minister said during his remarks to scores of Bahamians gathered to witness Commodore Bethel's official takeover of the RBDF.

"The defence force has a strategic role in national development. To this end and to the further support of the defence force's decentralisation, transformation mobilisation and regeneration programmes, my government will facilitate the completion of the Sandy Bottom Project with the construction of proposed warehouses, workshops, administrative buildings and accommodations for bases in Coral Harbour Inagua and Ragged Island. We will also be looking forward to the development of bases in other islands as a part of this programme.

"We will strengthen security co-operation with regional partners such as the United States, which through the US Northern Command has been responsible for conducting military training for hundreds of defence force officers and marines as well as providing financial assistance with patrol craft and equipment."

Dr Minnis continued: "We will conduct a review of salary responsibility allowance and technical pay to ensure that officers and marines are adequately paid for their hard work.

"We will make provisions for the extension of contractual terms for qualified and performance oriented senior enlisted personnel who are required by law to retire by age 55.

"The future is bright for the fine men and women of the defence force. We are all called upon to set a high standard of excellence and to help guard our heritage."

At a total cost of $232m, the Sandy Bottom project, according to the RBDF, is the single largest capital investment the government has ever made in the force since its inception in 1980.

The project is expected to aid the implementation of the RBDF's decentralisation programme and includes the development of defence force bases at several locations in the northern, central and southern Bahamas.

It is also expected to provide operational coverage of the Bahamas' waters to aid in the fight against poachers, arms smuggling, and human trafficking.

Back in 2014, the Christie administration borrowed the $232m for the sale, building and delivery of nine new vessels and to carry out ancillary civil work for the project.