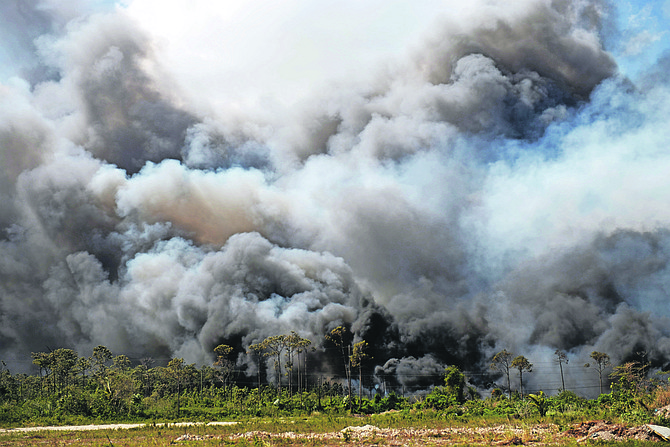 Smoke billows from the fire at the city dump on Sunday afternoon. Photo: Shawn Hanna/Tribune Staff

Monday 9.45am update: ACCORDING to Leslie Miller, the MP for Tall Pines, the fire has come dangerously close to the gas company on Gladstone Road and trucks have been deployed there to prevent an explosion.

The fire also crept into the yard at Aquinas College on Sunday night but was extinguished before any damage could be done to the buildings. The College is closed on Monday.

Overnight reports are that no houses were burned or destroyed. Royal Bahamas Defence Force marines were on security detail all night in affected areas, ensuring homes were not vandalised or broken into.

Depending on the winds easing, residents will be able to return home later on Monday morning from shelters at the Kendal Isaacs Gymnasium and Mario's Bowling.

The Bahamas Humane Society took in five animals from Jubilee Gardens on Sunday night and reports that it is set up for an influx on Monday. The BHS is asking for food, bowls, towels, pet crates or cages (clearly labelled so they can be returned).

Team sent in to evacuate residents by Tribune242

Smoke on Gladstone Road by Tribune242

JUBILEE Gardens residents have been evacuated after a "massive" blaze broke out on Sunday at the city dump sending plumes of choking smoke billowing over parts of New Providence. Emergency services were tackling the fire from early afternoon and the Flamingo Gardens clinic will stay open until 9pm to help residents suffering from smoke inhalation as the Princess Margaret Hospital Accident and Emergency Department was said to be "overflowing".

Fire chief Assistant Superintendent Walter Evans said the fire at the landfill was producing "heavy amounts" of smoke and called for all of the residents of Jubilee Gardens to evacuate and to seek safe shelter. He said the fire was being fuelled by the heavy winds of the past few days and he asked people to leave their homes and seek respite until the fire is extinguished.

On Sunday afternoon, Mr Evans reported that some residents had already sought medical attention from smoke inhalation. He asked for family and relatives to help with the evacuated residents. The Kendal Isaacs Gymnasium has been designated as the shelter for people to head to.

Patricia Laing, Patient Relations Supervisor in the Accident and Emergency Department at the Princess Margaret Hospital, told The Tribune: "The Flamingo Gardens Clinic will be open until 9pm tonight to assist persons who have been affected by the fire in Jubilee Gardens as PMH A&E is overflowing."

Mr Evans said that three fires had broken out simultaneously on the island in which homes were being threatened and fire services deployed. As well as the landfill blaze, one home was destroyed and one extensively damaged in the Charles Vincent Street area. At the same time in the Farrington Road area a large number of homes were threatened by another fire. Several fire units had been posted there. People were told to turn off their power supply and soak their roofs with water in order to help the fire services.

Prime Minister Perry Christie visited the scene near the dump on Sunday afternoon.

At statement from the government on Sunday night said that the National Emergency Management Agency (NEMA) had activated its emergency plan and suggested the fires had been started deliberately.

"The Emergency Services are currently battling a major fire at the Public Landfill," the statement read.

"By order of the Police, an Evacuation Order has been isssued covering residents living in the surrounding area of Jubilee Gardens. Residents are urged to leave the area immediately and take all necessary precautions to ensure their personal safety, and the safety of their loved ones.

"Those living in the affected areas are advised that evacuation facilities have been established at the [Kendal Isaacs Gym in Oakes Field].

"The National Emergency Management Agency, NEMA, has activated it’s Emergency Plan, and all available resources have been mobilised.

"Although it is too early to be certain, at first sight it appears that a number of fires were started in the area. Because of the high winds currently being experienced on New Providence, it appears that at least one of those fires blew across the boundary and ignited the Public Landfill.

"Prime Minister Perry Christie was on the scene shortly after the scale and intensity of the blaze was confirmed. The Heads of the Key Emergency Services, along with Captain Russell of NEMA, Ministers of the relevant government agencies and departments, along with a number of local Members of Parliament, have all been in attendance.

"In line with the technical advice given, Prime Minister Christie confirmed that the government will reach out to international partners for assistance, if and when the situation warrants it.

"Prime Minister Christie said: 'The number one priority is to ensure that everyone is safe. I am confident that the Emergency Services are doing whatever is required to make certain that no-one comes to harm. We have already made every resource available to limit the damage to property, and to minimise environmental harm.'

"Officials have advised members of the public to monitor official news channels for information, and not to rely on rumours on social media for information. Further statements will be issued once more information is known."

Last night NEMA announced the Kendal Isaacs Gymnasium would be managed by social workers and Royal Bahamas Defence Force personnel and could hold up to 400 people from Jubilee Gardens, Victoria Gardens and surrounding communities.

The high winds and gusts which have been driving the smoke are forecast to last into the week.

Last night Aquinas College posted a note to parents saying the school would be closed on Monday because of the fire and smoke emanating from the landfill.