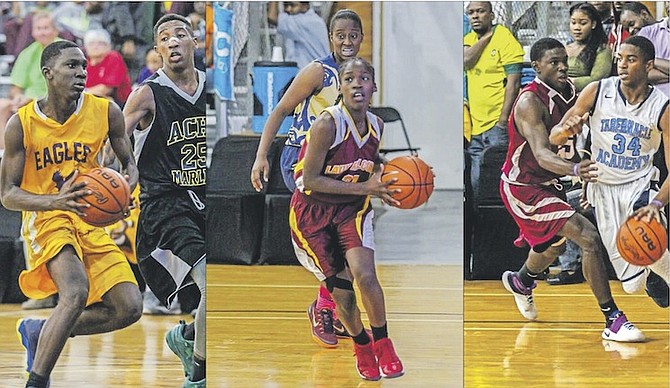 SEVERAL of the best high school basketball players in the country took full advantage of the opportunity to showcase their skills at the second edition of the National High School Basketball Championships.

The Bahamas Basketball Federation along with the Ministry of Education, Science and Technology hosted the event in Grand Bahama, which featured the top senior boys and girls and Family Island divisions.

St George’s Jaguars emerged as the story, as they protected home court in their gymnasium by claiming the Division I title in a 61-53 win over the Tabernacle Baptist Falcons.

Several other athletes raised their stock in an effort to secure scholarships, set the tone for next year or simply end the season on a positive note.

The Jaguars Howard Hinzey was named the MVP after his 16-point, 13-rebound performance in the title game. He led the All-Tournament team selections along with fellow Jaguars teammates Mateo King, Davonte Jennings, Ahmard Harvey and Kyle Smith.

Bridgewater finished as the tournament’s leading scorer at 17 points per game, while Hinzey made the most field goals with 33.

He scored his tournament high of 22 in the second of the T’Wolves three games of the tournament in a win over SAC.

Kenneth Johnson of Teleos was the second leading scorer at 16 points per game.

Burrows, from the Big Red Machine, was the tournament’s top rebounder with 10.5 per game, the only player to average double figures in the category.

The  T’Wolves’ Tyriq Bain grabbed 9.67 boards per game while Asher Scavella of the CI Gibson Rattlers grabbed 9.25 per game and Harvey finished at nine per game.

Scavella was also the top free throw shooter with 24 makes.

The Falcons versatile big Adam Johnson was the tournament’s leading shot blocker at four blocks per game. The Rattlers Dominick Burniside was second at 1.8 blocks per game while Harvey was third at 1.71.

Bridgewater also led the tournament in steals at 4.33 per game followed by Eight Mile Rock’s Dean at 3.33 per game and Desmond Butler of Tabernacle at 3.25 per game.

Mateo King was the top three-point shooter with 18 made field goals. The top three point shooters in the tournament all belonged to the Jaguars and Falcons with Smith, Jennings, the Falcons Seandre Todd and Desmond Butler with eight and Miller with seven.

Butler also led the tournament in assists at 3.25 per game.

In the Senior Girls division, the Jordan Prince William Falcons won the national title but the Rattlers’ Latavia Brennen was heralded as the top individual performer. Brennen averaged 18.8 points and 18 rebounds per game.

Doris Johnson’s Thyrell Thompson led the tournament with 2.6 assists per game, Paula Greene of Bishop Michael Eldon School was the top shot blocker at four per game, Delilah Rigby of Eight Mile Rock was the leader in steals at 5.67 per game and Mya Greene of Tabernacle was the top three point shooter with 10 made field goals.

In the Family Island division, the Gateway Eagles out of Bimini won the national title, led by Bradley Lightbourne who was named the MVP.

Menalich Smith of South Andros was the leading scorer at 16.5 points per game (two games), while Lightbourne and Colin Storr of San Salvador both finished with 14.8 points per game (four games).

Lightbourne was also the leader in steals at 4.25 per game

Storr averaged a double double and also led the tournament in rebounds at 10 boards per game while Lightbourne averaged nine per game.

Dwayne Bullard of Central Eleuthera led the tournament with 1.75 blocks per game and also averaged 9.25 rebounds per game.

Dremeko McIntosh of Abaco Central led the tournament with 2.6 assists per game and Gateaway’s Lemardrae King was the top three point shooter with five makes.