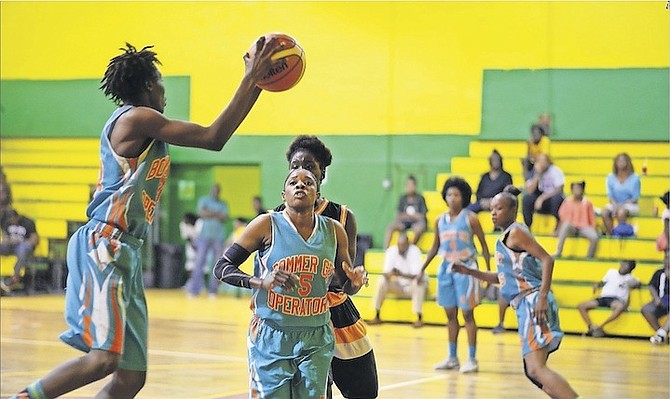 THE Bommer G Lady Operators avenged their loss for the season by holding off the Career Builders Lady Cheetahs 64-56 on Saturday night as the New Providence Women’s Basketball Association continued their regular season at the DW Davis Gymnasium.

In what was the marquee match-up so far in the season, the Lady Operators were able to withstand every challenge presented by the Lady Cheetahs as they never relinquished their lead, although the game had one tie.

Philicia Kelly scored 22 points and Chrisandra Rahming added 11 points in the win for Bommer G, who improved their front running win-loss record to 9-1.

“I like to compete. I don’t like games where we have a blowout,” said Lady Operators’ head coach Donnie Culmer, assisted by veteran Anthony Swaby. “Close games bring out the best in you as a team. We want to get better every day. But we don’t intend to lose any more for the rest of the season.”

For Career Builders, who slipped to 7-3, Leashja Grant, home from school at TexasTech, sparked the attack with a game high 30 points. Shantelle Rolle added eight and both Tanea Bowleg and Briontae Riley had five apiece.

“We made too many turnovers and we got beat on the transitional end,” said Lady Cheetahs’ coach Deven Johnson. “We got outrebounded too, especially in that third quarter when our bigs got in foul trouble. We made it a good game down the stretch. Hopefully by the players, we will get everything together because we were missing some key players tonight.”

Bommer G took advantage of Career Builders from the openings of the first quarter, opening a 9-6 lead before Grant canned a three-pointer for a 9-9 tie.

However, the Lady Operators dialed up a 12-3 run the rest of the way to push ahead to a 21-12 lead at the end of the first break as Rahming fuelled the run with two consecutive baskets.

In a run of their own to start the second quarter, the Lady Cheetahs held the Lady Operators to two points as they used a 7-2 spurt to come within three (23-19). But it was short lived as Bommer G went on another tear, extending their lead to 43-38 at the half, thanks to Kelly’s nine points in the spurt.

The big turnaround came in the third quarter as Career Building was held to just two points, but Bommer G only had nine to their credit for a52-40 advantage in what was a defensive period that saw both teams make a number of mistakes.

The Lady Cheetahs got the better half of the first four minutes of the fourth quarter as they cut the lead to one (55-54) with Grant contributing six and Rolle canning a three-pointer.

That seemed to have inspired Bommer G as they closed out the final four minutes on a 9-2 run, sparked by a three-pointer from Sherelle Cash and ended on baskets from Rahming, Kelly and Ferguson.

Every time the Lady Cheetahs made a run, the Lady Operators answered back to secure the win.

The league also played two games in the junior segment with the following results posted: