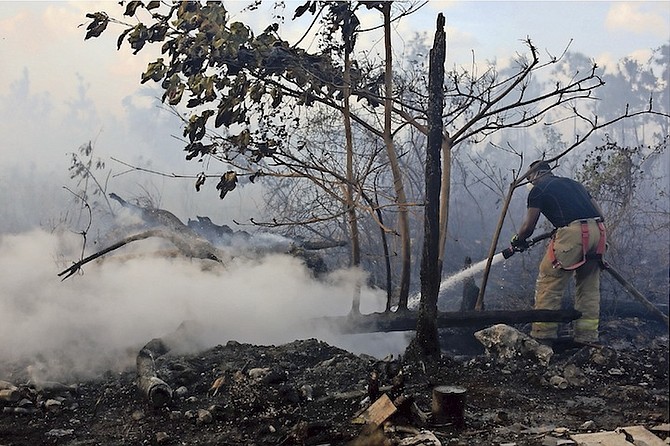 FIREFIGHTERS are battling a massive bush fire in southern New Providence that threatened homes near Dignity Gardens and blanketed the community in thick, white smoke yesterday.

Fire Chief Superintendent Walter Evans said police received a call around 3pm that the forest near Spikenard Road was on fire. When officers arrived, they found the blaze had jumped from the northern side of Carmichael Road to the southern side, threatening a number of homes.

He said firefighters and resources were diverted from the fire at the New Providence Landfill to the blaze on Carmichael Road to protect the homes and businesses in the area.

The Fire Chief said the main priority is to prevent the fire from spreading west towards the Lynden Pindling International Airport (LPIA).

“We have three units from the Royal Bahamas Police Force (RBPF) and one from the Airport Crash and Rescue Department. The call came in around 3pm and when we got here we met heavy smoke pluming over the Carmichael Road area, just west of Spikenard Road and east of Bacardi Road,” Supt Evans said.

“We were able to have the assistance of a backhoe operator who was in the area, who created a fire break for us and that has assisted us in making an advance on this fire.

“There is some smoke but it is not as bad as the fire we had in Jubilee Gardens. The wind is carrying the smoke and it is not staying in a still fashion and it is not heavy as it was last week at the Landfill.”

Supt Evans said the fire is burning deep inland and access is a “major challenge” for the fire department. He said the only way to get to the blaze is with the use of heavy equipment, which they are currently “trying to acquire”.

“We need operators to assist in getting that access. The emergency units cannot make access and when we do that, we are able to ensure the fire is controlled. The main thing we want to stop is the fire moving more towards the west because we know the airport is in that general area to ensure the fire does not affect the flights.

“We suspect that we will have smoke in the area for another half a day or so, but that is predicated upon getting access,” Supt Evans said.

Supt Evans said residents in the general area should, close the windows and the doors to minimise the amount of smoke that “may penetrate their homes”.

Rome burns while Nero fiddles on the roof??? (Translation-Perry shuffles while Nassau burns)

Let's all hope the suffering people of Dignity Gardens appreciate that there is no dignity (pun fully intended) or hope in voting for the PLP candidate who will be running in their constituency in the upcoming general election. Like Jubilee Gardens, these poor people are suffering greatly because the PLP government have failed to ensure that our fire fighters have the resources they so desperately need to carry out their mission for our people.