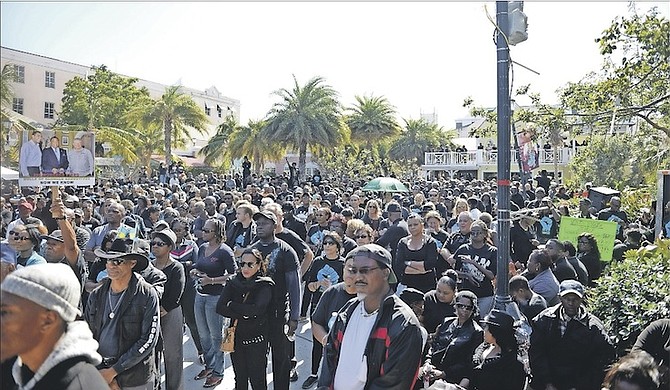 Some of those taking part in the We March Bahamas protest on Majority Rule Day.

Mr Tirelli told The Tribune if We March insists on protesting Bahamas Junkanoo Carnival, the bands will throw a fete (party) “right where the march ends”.

He said he is disappointed that We March organisers did not sit down and talk with the BCBOA, to understand the amount of money that private citizens have invested in the festival.

In fact, Mr Tirelli said the government has done “very little” to assist Carnival bands this year, adding that they have failed to effectively market the event to the world.

“I believe in marketing and sales, so there is no such thing as bad press, so We March is going to help drive the event and let people who may not have known that Carnival is coming. So it will spark the conversation,” Mr Tirelli said.

“So its positive in that aspect, but it is negative because it is affecting costume sales. We have people calling from Trindad and other places asking if we are still having a carnival. The bulk of our money is coming from the international market. But if they want to march against Carnival we will throw a fete right where the march stops.”

Mr Tirelli said if the government does decide to cancel or postpone carnival, the BCBOA will have their own street party.

“Plenty people are waiting on this; this is an industry so we are not worried. We cannot hurt our head about things. To be honest the government has failed with the international promotion, they have not been doing a good job. I welcome We March to have a conversation with us and find out what this festival is and what this industry is about. I have supported We March but this is something that they should not be marching against. They should have had a conversation with us.”

We March Bahamas intends to stage its third protest on April 2 to, among other things, demand that an election is called before May 7 and the postponement of Bahamas Junkanoo Carnival.

In a Facebook post, the civic group mentioned the successes of its two previous protests, noting that efforts mounted by the group had averted several major events.

At the conclusion of the post, We March declared, “Now, we march again.”

The organisation announced six issues that it wanted to have addressed by government within the coming weeks.

I'm not a fan of Carnival but I agree that the initial announcement about marching to stop Carnival was foolishness when so many other pressing matters are ripping the country apart. That announcement revealed the politics of the march, which organizers have tried to convince us was not a prevailing factor.

We March is promoted up by their own self importance. somehow they believe they .run the whole Bahamas. I do believe some people benefit financially,and many seem to enjoy the festivities The Government receives criticism because of it. They are between many rocks*** and a hard place. . But they have to make up their minds. the critics probably never voted for them .

We March now say they will endorse a party, Who cares,

I thought carnival was in Trinidad though?

I can hear it now, the We March caused the third carnival to be an even bigger flop than the two previous festivals.

hey let's have a We March on the same day as the Road March.

Ronnie butler came the first time, he can come again.

No. We March can be one of the biggest bands on the road. It can be part of the road march. All the go to do is have music. Look at it as a positive.

I think the government did the carnival bands wrong. They promised them support but had no intention of follow through and absolutely no respect for the wishes of the Bahamian public. Before the first parade, it was clear that the country was against a Trinidadian style festival, the opposition today is not a surprise. But the government decided that Bahamians fickle and they would change their tune after they had some rum.

They promised a Bahamian festival in every aspect not just location. Instead, they delivered a Trinidad festival located in the Bahamas. Three years later with election looming the government doesn't want anything to do with the road parade which has become the whipping boy

If we're talking about spending priorities the first thing to recognize is that carnival is much more than the parade, it's the music competition which is great, the millions of dollars on international marketing and travel, the million of dollars on the concert and the setup of the festival village. Any talk of privatizing carnival must take into account those concerns as well.

The sensible way out of this is to pay the bands for their efforts, scrap it and rethink the entire concept. Back to basics, deliver the Bahamian "in every aspect" festival that was promised. It cannot continue year after year with the tone deaf "carnival is great" on one side against "cancel carnival" on the other, fight.

And "Bahamian" does not mean boxy and ugly. Junkanoo groups put on attractive, light weight, low cost parades every time they travel abroad. The carnival bands can do the same locally. More culture less sexuality