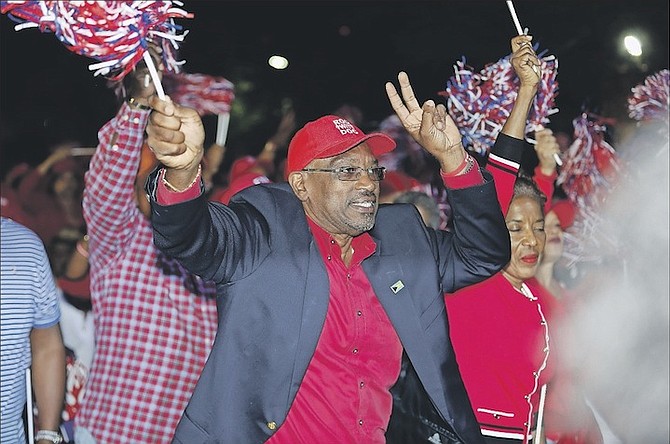 In a statement to the press on Sunday, Dr Minnis called it concerning that despite the introduction of value added tax (VAT) and collection of over $1b in revenue, the national debt continues to rise.

The Killarney MP suggested that the while the nation’s economy sits on the brink of collapse, the PLP continues to “spin out their fantasies.”

Dr Minnis urged the electorate to view the upcoming general election as a “call to arms” for the country’s economic and social future.

“… We need new leadership that will listen to the people and work to turn our country around,” Dr Minnis said.

He added that a new FNM government will “immediately begin to repair the damage caused by the PLP’s five long years in office.”

The statement read: “As the economic state of The Bahamas continues to decline, the government’s deficit in leadership has become as significant of a concern as the budget deficit itself. Even after collecting over $1b in VAT, the national debt continues to rise. Their lack of leadership was again demonstrated by Deputy Prime Minister (Philip) Davis, who said on Wednesday that our budget was ‘thrown off course by $400m’ as a result of the two recent hurricanes.

“This explanation isn’t a simple miscalculation; it is another distortion the government believes it can use to blind their constituencies from its obvious mishandling of the nation’s economy. It’s a depressing fact that the government continues to blame everyone and everything—including the weather—on their inability to meet their campaign promise from five years ago when they pledged to get the Bahamian economy on a path of growth and prosperity.”

Dr Minnis’ statement continued: “Five long years, and our economy continues to shrink. For so many Bahamians nothing is getting better, it’s only getting worse for them and their families. The PLP got their way, imposing their onerous VAT tax on the people.

“They said the revenue was needed to pay down our debt. Yet gross national income has declined each year under the PLP government, while our debt has skyrocketed. This government’s continued mismanagement has led our country’s credit rating to be downgraded to junk bond status by the international rating agencies.”

Dr Minnis said the FNM, if elected, would look to enact comprehensive economic recovery plans that put people to work and leads to true economic growth that benefits all Bahamians.

He added that Bahamians cannot afford five more years of an “inept, ineffective PLP government where pointing fingers and placing blame has replaced leadership and solutions”.

The FNM leader ended his statement with the indication that the FNM will pursue economic policies that strengthen every section of the economy, to create a path to opportunity for all.

The Christie administration has drawn wide criticism for its handling of VAT revenue amidst growing national debt.

Last week, former Prime Minister Hubert Ingraham criticised the administration’s lack of transparency over the economy this term, challenging that the Christie-led administration’s fiscal performance over the past five years could not rival his party’s governance during a global recession.

At that time, during an interview on Bahamas at Sunrise, the former prime minister said that public concerns over the national debt and VAT would be eased by greater transparency.

Mr Ingraham said the country was of the view that revenue earned from the tax would have been used to pay down the government debt, adding that the government still has answers to give as to why the debt has increased to such an extent during this term.

In the days following Mr Ingraham’s comments, Deputy Prime Minister Philip Brave Davis said the former prime minister was “missing the spotlight,” suggesting that his comments were motivated by the pain of watching his successor - Dr Minnis - “wander around in a fog of incoherence.”

Moreover, Mr Davis questioned how Mr Ingraham could find the nerve to complain about how the country’s economy was rescued, given the state he had left it in when he was voted out of office in 2012.

"Roc with Doc" can rest assured that Should he win he will not be like his papa who was able to say the treasury had lots of money in 2007. and he spent money.like a drunken Sailor.Doc will stop the spin "Where the VAT money gone" Because the facts will hit him in his face.

Christie and his gang of thieves have just 'disappeared' our money into their personal offshore accounts.

So yeah, when Minnis comes to power the treasury will be empty. Pillaged by the PLP.

The truth will be revealed ......... and Bahamians will be scared shit-less of what the PLP inner circle have stolen over the past 5 years ......... At least $10 Billion may have been swindled in this term and the PLP elite must be made to account (after the FNM wins the 2017 election)