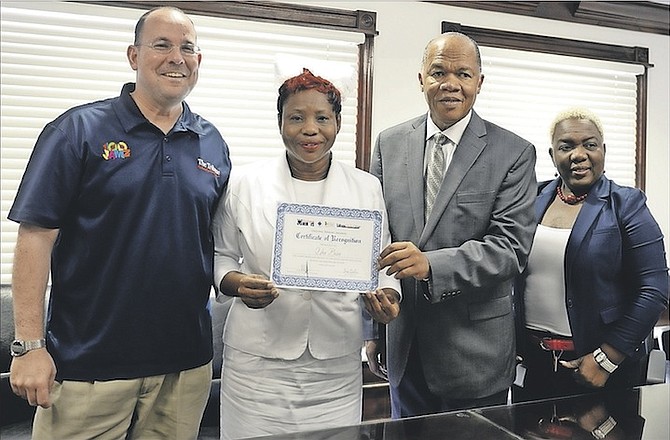 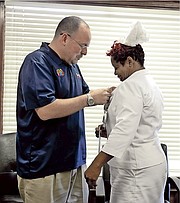 An award to recognise excellence

THE Unsung Heroes awards programme recognises and rewards excellence, care and compassion in the Bahamas health care system as part of a ground breaking public-private partnership between the Public Hospitals Authority and the Tribune Media Group.

It will identify and publicly honour those PHA employees who have gone “beyond the call of duty” in providing levels of care and compassion throughout the islands, in the authority’s two hospitals (Princess Margaret and Rand Memorial), Sandilands Rehabilitation Centre and its 108 clinics and agencies.

Nominations of employees for the monthly award will be made by co-workers and by patients and visitors. The winner each month will receive a cash prize, dinner for two, a framed certificate and a bespoke recognition pin. An annual winner, selected from the monthly champions, will be announced and honoured at a gala dinner in January, 2018.

The prestigious awards programme is part of a partnership between the PHA and The Tribune announced in January to advance the fight against paediatric diseases in the Bahamas, an alliance local health officials said will have a “significant impact” on the delivery of paediatric care throughout the public healthcare system. Its aim is to raise awareness about and subsequently battle various diseases, such as Hemophagocytic Lymphohistiocytosis (HLH), Leukaemia, Diabetes and Cancer.

The partnership is the brainchild of Robert Dupuch Carron, president of the Tribune Media Group, and his wife, Elizabeth, whose infant son Aidan contracted HLH, a deadly auto-immune disease, and leukaemia. Aidan’s plight prompted the Carrons to establish the Aidan Roger Carron Foundation and forge a partnership with the PHA to ensure that what happened to their son does not happen to other families.

Mr Carron said the initiative “is about bringing together partners from all walks of life with a common goal of transforming our approach to paediatric healthcare, so that no child is left behind. It is also about recognising and saluting all those who, without their extraordinary efforts, many other children would not be here.”

The Foundation’s mission statement is “Together we can fight HLH, Leukaemia, Cancer, Diabetes, obesity and other paediatric diseases by utilising world-class partnerships, creative multi-platform educational campaigns, state-of-the-art diagnostic equipment and treatment protocols, whilst recognising the ‘Unsung Heroes’ in our nation.”

The criteria for nominees for the monthly PHA Unsung Heroes Awards encompass exceptional success in an area or aspect of work including consistent and outstanding performance; demonstrating initiative for personal development and professional knowledge while maintaining the highest standards of relationships with patients, staff and the community; consistent and outstanding leadership, actively promoting and encouraging colleagues to deliver a high standard of service; consistently high standard of service delivery to internal and external customers; achievement in promoting links with the community or enhancing the reputation of the PHA in it; and noted participation in community health activities at various levels.

The attributes which make an employee suitable for nomination include attitude, drive to succeed, overall work quality, an exceptional act of service and willingness to go the extra mile.

Nomination forms and full criteria for eligibility and selection can be found on the PHA website (phabahamas.org) or submitted via email to or obtained from Human Resources. They will also be available to patients and visitors at all facilities. Nominations must be submitted by the last day of the month and an independent selection committee will judge the entries. Employees can only win one monthly award per calendar year.

SHOCKED was how Una Bain described being named the March winner of the Public Hospitals Authority’s Unsung Heroes Award.

Taken aback by being both nominated by colleagues and ultimately being selected, Ms Bain, a nursing officer at the Princess Margaret Hospital’s highly specialised Neonatal Intensive Care Unit, said while she was overjoyed and honoured by the award, she viewed her selection as a chance to extend her efforts at work even further.

The veteran nurse, who is the national co-ordinator for the neonatal resuscitation programme and deputy to the unit manager, said the impact the PHA Unsung Heroes Award - launched this year in partnership with The Tribune Media Group - has had on morale throughout the public healthcare system is immense, adding that the chance of recognition of the hard work and dedication that goes into health care has made everyone in the profession go the extra mile. A record 75 nominations were received for the March award, including a number from the Family Islands.

Ms Bain said she has to now challenge herself to meet higher expectations placed on her because the profession deserves the best.

Those who nominated Ms Bain praised her for being an “outstanding leader, honest, dynamic and dedicated” and for her “professionalism, empathy and desires the best for others”.

Kevin Darville, The Tribune Media Group’s special projects co-ordinator, presented Ms Bain with a cash prize of $1,000, a voucher for dinner for two at the Dune restaurant at the One&Only Ocean Club, a pin to commemorate her selection as the third monthly winner and a certificate to mark the achievement.

The PHA Unsung Heroes Award is a monthly recognition, given to employees in the PHA who have made extended and noteworthy contributions to the health services industry in the Bahamas. An annual winner, selected from the monthly champions, will be announced and honoured at a gala dinner early in 2018. The initiative recognises and rewards excellence, care and compassion in the Bahamas health care system as part of a ground breaking public-private partnership between the PHA and The Tribune Media Group.

The award will identify and publicly honour those PHA employees who have gone “beyond the call of duty” in providing levels of care and compassion throughout the islands, in the authority’s two hospitals (Princess Margaret and Rand Memorial), Sandilands Rehabilitation Centre and its 108 clinics and agencies.

PHA Managing Director, Herbert Brown, on hand for the award presentation, again acknowledged the renewed energy and effort the award has inspired since its introduction. As he commended Ms Bain in particular, he said that no level of success is obtained by someone simply doing the “bare minimum”.

He praised her leadership and wisdom, her versatility and her application of professional skills and experience to the tiny, vulnerable patients. “She is a people’s person, offering calm and unflagging support to the families of her patients even in moments of crisis,” Mr Brown said.

To that end, he thanked employees throughout the public healthcare industry for going above and beyond the call of duty to benefit and accommodate people seeking help in the medical field.

Ms Bain joins Patricia Laing, also a veteran nurse, and Veronica Ferguson, a wheelchair valet, as recipients of the monthly award. The Unsung Heroes Awards are open to employees of the PHA, with nominations now being accepted for April.