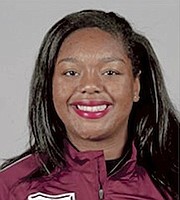 SERENA Brown had another record-breaking performance at the Mt SEC relays, while the men and women national teams didn’t fear so well at the Penn Relays where Brown’s alma mater, St Augustine’s College, had a successful showing.

And at the Drake Relays at Drake University in Des Moines, Iowa, over the weeken, Devynne Charlton helped Purdue to pull off a hurdles shuttle win over Pedrya Seymour and Illinois.

Brown, a freshman at Texas A&M, increased her own national record to 56.84 metres on her fourth attempt to win the women’s discus at the 2017 SEC Relays at the Bernie Moore Stadium in Baton Rouge, Louisiana.

Her nearest rival was Janeah Stewart, a junior at Old Miss, who threw 56.00m on her first attempt.

“This one felt really good,” Brown told The Tribune after her performance. “The girl who was in second, who threw 56-feet and I was able to answer back, so it was quite an amazing feeling.

“Being able to do that and get the win was just fantastic. All of my coaches and team-mates were so excited so the atmosphere was so jovial.”

“I was able to move up to number one in my conference this weekend and number two in the world junior list,” said Brown of her performance in the discus.

“My practices have been going really good and it has showed in my performances in the meets, so I’m just looking for some good things the rest of the season.”

After failing to make the finals at the IAAF/BTC World Relays last weekend at the Thomas A. Robinson National Stadium, the Bahamas Association of Athletic Associations sent its men and women 4 x 400 metre relay teams to the Penn Relays Festival to improve on their times.

Competing in the showdown dubbed: The USA versus the World Elite Relays, neither team were able to improve on what they did here as they missed a couple of key athletes.

However, they didn’t complete in the Championship of America’s final.

On the college side, Teray Smith ran the opening leg for Auburn University as they won their heat in 39.66. Smith also opened up on the first leg in the Championship of America’s Invitational final as Auburn got third in 39.12.

The University of the Bahamas’ team of Aaron Cox, Yurick Dean, Ken Mullings and Avery Thompson was 40th overall in 40.50.

In the Championship of America women’s 4 x100m college final, Ambrose anchored Auburn University to second place in 43.02, while Albury on second leg for Penn State got sixth in 44.78.

The University of the Bahamas didn’t advance out of the preliminaries as the team of Gabrielle Shannon, Antonishka Deveaux, Ronnecia Ferguson and Alexandria Strachanwas 56th in 48.86.

The University of the Bahamas’ team of Gabrielle Shannon, Antonishka Deveaux, Ronnecia Ferguson and Beyonce Scott was 24th in 1:40.55.

And in the 4 x400m, the University of the Bahamas’ team of Gabrielle Shannon, Antonishka Deveaux, Beyonce Scott and Ronnecia Ferguson was 62nd in 4:07.96.

The top two Bahamian collegians competed against each other on the first leg of the women’s shuttle hurdles. It was Charlton and Purdue, who came out with the win in 53.85 with Seymour and Illinois taking second in 54.54.

Charlton also contested the elite women’s 100m hurdles where she was fifth in 12.89. Kendra Harrison of adidas claimed the victory in 12.56.

Seymour, meanwhile, ran the opening leg for Illinois as they got fourth in the university women’s 4 x 100m in 45.79. She also contested the women’s college/university 100m hurdles heats where she was the fastest qualifier in 13.16. But she didn’t compete in the final.

Jamal Wilson came in eighth in the men’s high jump with a leap of 2.14m (7-0 1Ž4). Trevor Barry was also scheduled to compete, but he didn’t make the trip.