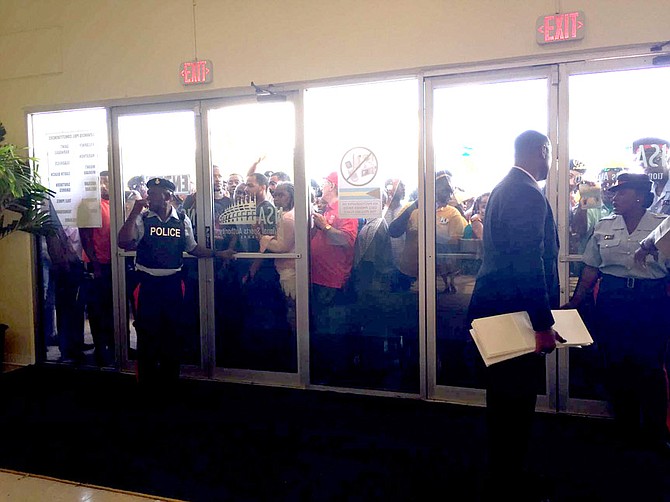 The video below shows PLP and FNM supporters on Wednesday afternoon at the Kendal G L Isaacs National Gymnasium - with FNMs chanting “No more teifing!”. 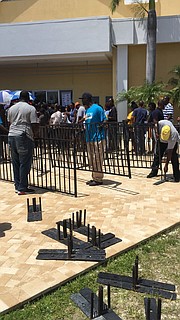 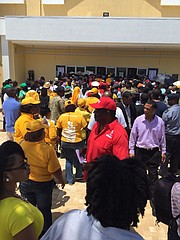 THE advanced poll for the general election got off to a chaotic and late start in the capital this morning.

Despite a public notice indicating there would be two separate polling stations, thousands of voters slated to cast an early vote in New Providence crammed into Kendal G L Isaacs National Gymnasium on Wednesday.

Voting was scheduled to take place from 8am to 6pm, but did not get started until around 9.20am. The Thomas A Robinson National Stadium had been named as the second site but was not used.

One of the first voters told The Tribune he arrived at the polling station at 6.30am, with many others attesting that they had been waiting in line since 7am.

Over the course of the morning, hundreds of voters joined the lines outside the gym that extended well past the tents erected in the parking lot to shield party workers from the sun, and out into the road.

As crowds continued to build, officials began erecting additional barricades sometime around noon in a bid to create separate lines for respective constituencies.

National Security Minister Dr Bernard Nottage, who has responsibility for elections, told reporters at the gym that the process was not going as freely as the government would have hoped, but expressed confidence that it will run smoothly next week Wednesday.

The Tribune has also received anecdotal reports of hiccups at overseas embassies in London and Atlanta; however, those reports are still unconfirmed.

Waiting to vote in the advanced poll by Tribune242

FIRE SHERLYN HALL NOW or convince him to call in sick for the next week. Chaos will be too weak a word to describe May 10. He does not need another chance to prove he's been promoted to the point of failure #PeterPrinciple

Heard that the ballot boxes arrived late. How incompetent is that?????

"National Security Minister Dr Bernard Nottage, who has responsibility for elections, told reporters at the gym that the process was not going as freely as the government would have hoped,"

Listen, you guys are the only ones who can't see what's before your eyes, just like you thought changing the carnival date was a great idea, or scheduling election right after carnival was "cute", or not implementing a system to account for VAT money. Sherlyn Hall is incapable of leading this exercise. He may be a great worker but this job is past his competency level

There's a man in the video with a sign calling out "Saint Barnabas" what the dickens is that???

Uhmmm .... yes:) but why in the dickens is he standing with a sign in front of a crush of people yelling out "Saint Barnabas"? Suppose all the people from Saint Barnabas at the back of the line and can't see him or hear him? It's mind-boggling the level of disorganization, if there were going to be different lines for different constituencies, shouldn't they have cordoned off areas, with signs?

thank goodness, for a moment i thought the fella was announcing the end of times.

Double LOL. I laughed so hard just now I teared up!!

Comrades! By now you'd thoughts the voters would have been clued in to expect the chaotic nature when they shows up to vote...But is it just more disorganized chaos, or something more planned sinister? I never knows what to believe?
Let this be a hint of the importance to make damn sure the opposition parties candidates have their polling station trained monitors - stationed across all of Bahamaland's polling stations on May 10, 2017. You also need to staff your command stations to receive calls and emails to quickly respond to voter concerns/clarifications/confusion - from your hundreds election day monitors. Be prepared to quickly respond to some dirty tricks.

I can't believe, that as a people, we have become accustomed to expect disorganisation as a norm in all things public, yet it has happened.

The Tyranny of Low Expectations, they call it over here; 'progressively' lowered until it reaches the level of the outhouse basement.

Keep lowering citizen expectancies, and they'll be grateful to get thru the day with a scrap of green bread, without getting arrested.

That's the plan. And I must say... they are executing it PERFECTLY!!

I don't know why everyone seems surprised. The PLP government is the epitome of chaos. Everything related to them is shrouded in failure, incompetence, and disaster. They are a piss poor government. Everything that they touch turns to shit.

The FNM government put on a flawless general election back in 2012. Everything ran smoothly even as they were being voted out of office. International observers even went out of their way to praise our general elections process. Now in comes the scandalous, skulduggerous, unscrupulous, scandal ridden PLP. How these stupid, assified, jackass, monkiefied Bahamian people keep voting for this government is beyond me. In a democratic country the PLP can't even organize and carry out a simple general election process! Yet they're telling us that they are fit to government our country. Anyone who votes for the PLP is a REAL LIVE JACKASS.

You are giving lkalikl a run for his/her money.

Lol I thought the same thing. Was going tell Cobalt that he needs to let us know if he's really angry. Lol.

I could not have said this better. This is the absolute truth!

Think they orchestrated to discourage people from voting...I wouldn't put anything past these people

That is my personal belief. Piss off the people with jobs and who aren't getting paid to stand in line (i.e. the non-PLP supporters).

They anticipated about 8,000 people. Why was there only 1 centre for voting?

Tribune, just out of idle curiosity, where was the second polling station and what happened there?

I thought ingraham tell Perry not to leave hall in charge after he screw up the referendum. Child at this rate we ain't ga know who win the election til Thursday afternoon next week - if we lucky.

I won't believe the results until someone from the opposition announces it. I am definitely NOT watching the results on ZNS - they probably have the script and results already prepared.

Comrades! To suggest that the international election monitors had certified that Papa Hubert's red regime conduced a "flawless" 2012 General Election campaign, is misleading in fact.

The shit will hit the fan in this country if the plp try to steal this election. Bahamians will not tolerate that&gt; It's not going to be another 1987

The election outcome will be like the Junkanoo results at Xmas and New Year, late and highly suspect.

BOL .......... Yep, the Junkanoo results are so jacked up now that the JCNP needs to just have a rush-out and leave the judging to social media ...... smt

But in all seriousness, I am not sure what is going to come of the election results this year. ......... BTW: who is on this list of advance poll voters????

I strongly suspect that the Early Poll ballots that was cast today will be use to rig or corrupt the outcome of our entire general election. I am saying this because there was nothing in place by which voters who had filled out the 'K-forms' to participate in the early voting for the 3rd May to be screened from the general voting populace.

Notwithstanding the four (4) hours it took me to vote, I observed that there was a very large amount of voters that came out to vote in the early polls. Arguably, this amount of people could near a general election count 'in and of itself'. In no way could it be said that the Parliamentary Commissioners' office handled that amount of application to request permission to vote early. No way!!!

Sadly, this does create the ideal opportunity to corrupt the results of the election.

But do know this.... as the book of Isiah iterates, "WICKEDNESS BURNS AS FIRE". Wickedness will destroy itself. Indeed, you cannot do wrong and get by. We needn't fret ourselves to address this wrong as much as it will backfire on them... long rope and a short catch!!!

Godson- in this country wickedness seems to win all the time, and the wicked get by all the time.

If Minnis or any of the independents are worth their salt, they will look seriously into this matter to determine if the process was flawed and if it is so they should think about getting a court injunction to stop this fiasco and have these polls declared null and void.

The fact that they couldn't even handle the early voting gives me little faith that next week will be any smoother even with multiple stations across the Bahamas.

I am a student at the Cave Hill Campus of UWI and today was a total DISASTER!!!!! Tomorrow the polls will open for a SECOND day to accommodate students who were unable to vote because the ran out BALLOTS in some constituency and others had no ballots at all! Can you imagine that?? Less than 100 students, names missing from the register, counterfoils missing and insufficient ballots. I shudder to think what will happen on the 10th in the Bahamas!!

!!! This is alarming. Hope the Tribune can get a story out on this before May 10th elections.

As an aside, yay cave hill:) I hope that meeting between Brave Davis, Bernard Nottage and Sherlyn Hall was to ask him for his resignation and not to congratulate him on mission accomplished

Heard Halls contract expired today. The PLP left him there for such a time as this. Seems his mission was accomplished!

There is only so much that Mr Christie will take, Hall and his worthless ass will be gone soon.

Nobody should be surprised. Typical chaotic PLP leadership!

Vindicate me, O God, and plead my case against an ungodly nation; O deliver me from the deceitful and unjust man! Arise, O God! Fight for your own cause! Remember how godless fools insult you all day long.Remember this, O LORD, that the enemy has reviled, And a foolish people has spurned Your name.The LORD arises to contend, And stands to judge the people.Consider the covenant;For the dark places of the land are full of the habitations of violence.Let not the oppressed return dishonored;Let the afflicted and needy praise Your name.Arise, O God, and plead Your own cause;Remember how the foolish man reproaches You all day long.Do not forget the voice of Your adversaries,The uproar of those who rise against You which ascends continually.