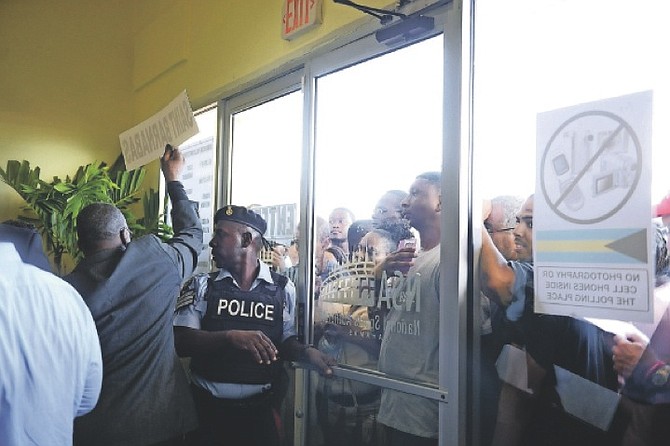 Voters outside the Kendal Isaacs gymnasium on Wednesday.

PARLIAMENTARY Commissioner Sherlyn Hall’s ability to run a successful May 10 general election is a “matter under review,” according to Prime Minister Perry Christie as he told reporters he was “disappointed” over the process at the Kendal G L Isaacs Gymnasium where thousands turned out to cast ballots for yesterday’s disorganised advanced poll.

While Mr Christie would not reveal whether the government intended to remove Mr Hall from overseeing the next election - considering yesterday’s botched poll and the equality referendum that also experienced issues last June - the prime minister said: “We are going to make the right decision for the country.”

He intimated apparent surprise that the process had not gone as smoothly as officials expected, saying every effort was made to prepare and be able to deal with issues of this magnitude.

He blamed “administrative challenges” and a decision by “someone senior” that early voters from all 39 constituencies could all be accommodated in one facility - instead of two as originally planned - revealing that these issues led him to call in the assistance of “senior officials” with experience in elections to assist Mr Hall.

Asked to respond to critics who had accused the government of attempting to “steal” the election by frustrating the process, Mr Christie said to suggest this was “lunacy.” He said he did not understand this assertion because “everyone got a chance to vote.”

However some people claimed they were turned away from the advanced poll, either because their name was not on the register or because they were told they did not have the right documents, among other issues.

Moments before speaking with reporters in the foyer of the gymnasium, Mr Christie voted in the advanced poll, in a process he suggested was smooth and the same as all the other elections in which he had voted.

Scores of Progressive Liberal Party and Free National Movement supporters along with those from the Democratic National Alliance got into a shouting battle as some welcomed him.

“It is a matter that is under review,” Mr Christie said yesterday. “I actually had people down there with Mr Hall who’ve had the experience of elections before, by senior officials, with the view to assist him as best they could. Whatever is in fact the position as a result of the reports that I received during the course of this evening, if we have to act upon them, we will act upon them.

“The point is we are going to make the right decision for the country and that is an important process. It would be totally inappropriate for me to draw a conclusion before I have a full report on what took place and I don’t want to do that prior to the polls closing.

“Yes, you are always disappointed in a modern democracy when things don’t run smoothly, when every effort was made to prepare and to anticipate and to be able to deal with issues of this kind. So I am told that someone senior made the decision that this could be accommodated in this place and surprisingly for me I have to wait to find out if in fact that is true and that involves Mr Hall.”

Questioned on the accusation that the PLP was attempting to hijack the election, Mr Christie said: “How could we steal it by this? Everyone got a chance to vote. I think the only issue here is that it took time for the people to vote, but no one has questioned authenticity of the vote or the process of the vote. It is lunacy to do so, but, of course, you know lunacy does exist in this campaign and in terms of what people say.

“But the fact that there has been administrative challenges, meaning the time it took people to vote is in itself to do with how effective the administration is. When it comes to the integrity of the process, we will find out in that regard.

“The point in the matter is that I think that the parliamentary commissioner had the facility to deal with this. I think the decision was made that this could happen all here in this one building. I think that is the issue that it could have been more effective if we had another building,” Mr Christie also said.

“These are administrative decisions that we made and so for us looking at that and it is administrative it is an imposition on people as in the time it took for people to vote the condition under which they had to withstand in the process of being on the line.

“In a modern democracy that should be avoided. I voted just now and I went through the same way I voted in all of the elections that I have voted in. I don’t know the people who are processing me. They looked at my card, they told me it was authentic, I went in there, they told me how to vote, they put this on my hand and they told me when I was finished to show me the back of the ballot and so that’s what I did. That’s what everyone did.”

Mr Christie’s remarks followed a jumbled advanced poll, which saw voters stand in lines for several hours in the scorching heat outside, as the scene inside the building was no better, at times devolving into flaring tempers and jostling inside for priority in line as police officers struggled to control the scene.

Comrades! Papa Hubert's call for the the PM to immediately fire the Chief Electoral Officer is somewhat unusual - considering the position of the CEO, should fall under the governor general, after clearing an all-party committee of the House of Assembly.
If the CEO is not above politics as claimed by Papa Hubert - we have a serious democracy issue to tend to.
I'd like to know what, if any, the opposition parties pre-election involvement has been to avoid the chaos which transpired yesterday?
Also, the rotten public behavior of some in the lineup yesterday - speaks volumes that this is not good for democracy - and all is not the fault of the CEO and his staff.

Tal you say you are not a PLP supporter, however you use every opportunity to tarnish the opposition the FNM.

What your doing in politics Tal, is called a 'pivot.' A pivot is typcially used to change the subject to favor your argument. Typically a pivot, is used when you realize you are losing an argument.

I am just stating some principles, and facts, so that people don't read the garbage you post and take it for gospel.

And I am not your comrade. A comrage is actually a socialistic term in case you didn't realize

Every. Single. Person. in this nation should call for the PM to immediately fire the Chief Electoral Officer.

An utter disgrace, highlighting government incompetence at the most critical and highest level.

Comrades! I'm not about to attempt to change Papa Hubert's ways, but you would think the former law partner turned Cooper's Town fisherman's - would respect that The Bahamaland, even as an Independent nation - remains a Constitutional Monarchy with a Governor General, who is the only one who can fire the Chief Electoral Commissioner.
It is no light matter to fire the CEC - but days before a General Election is to be held.

Comrade Tal........ North Abaco Opposition has yet to receive a certified copy of its register. This bull$hitt is unheard of. With less then a week to go till the election and no register. Mr MP looks old and defeated ,and it is safe to assume that he is not in charge of the PLP. A younger Mr Christie would never sink to this level. Is this deliberate on the PLP party to delay the register being given out to certain parties in order to gain an edge?..... It beginning to look so .Mr Hall will be gone today.

Comrade Seaman's. granted, there are hiccups which should have been avoided.