Christie: Get Swayed By Papa, End Up With Minnis 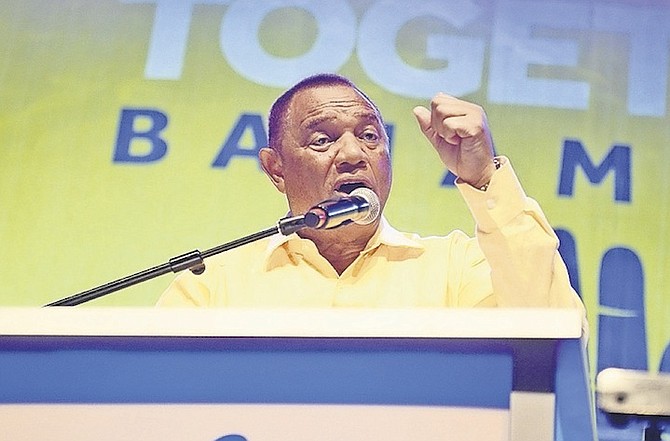 IF the Free National Movement wins the election, Dr Hubert Minnis would not be able to rely on former Prime Minister Hubert Ingraham for leadership, Prime Minister Perry Christie emphasised in Crooked Island on Saturday.

He said: “Because nobody listening to him, (Dr Minnis) called Hubert (Ingraham) out of retirement and, I don’t want you and I to forget this, Hubert and I squared off in 2012 and who won in 2012? So all I’m telling you is this: whether it’s Hubert Ingraham, whether it’s the Right Honourable Hubert Ingraham, whether it’s ‘Papa’ Hubert whatever it is, that Hubert Ingraham, that papa, that right honourable is not going to be able to do the job for Hubert Minnis because at the end of the day the people of the Bahamas are smart enough to know that it is Minnis who is supposed to lead, it’s Minnis who is supposed to have an idea and a vision for the country, it’s Minnis who does not have the idea, does not have a vision and it is Minnis who is hiding behind a lot of nasty things this time around, just talking bad about people and hoping to win an election on it.”

Mr Christie’s comments came as he contrasted the unity in his party with the disunity in the FNM in recent years.

“The FNM is a party unlike the PLP,” he said. “You have a united party, a party made of men and women that without any doubt whatsoever is the best team offered in the general election. Minnis’ party has a history of being broken up, disunited. You have a party with a leader with the known capacity to lead. Minnis has not demonstrated any capacity to lead. Minnis couldn’t keep seven or eight people together in Parliament. When we loan him two from the PLP, the two we lend him from the PLP couldn’t help him keep his position. He has a disjoined, broken up party.”

Since his return to the limelight last week, Mr Ingraham has been a dominant focus of attention for PLP supporters during rallies and on social media platforms.

His comments came during a rally in Abaco. Mr Christie was expected to attend but did not, citing bad weather in the southern Bahamas where he had visited.

Edison Key, who represented Central and South Abaco as a member of the FNM since 2007, also spoke in support of the PLP in Abaco.

He called Dr Minnis a “Chihuahua” who won’t be able to lead the country.

Mr Key was one of seven FNM MPs who said they had no confidence in Dr Minnis as leader of the Official Opposition and had him removed from that post last December.

In early April Mr Key said he was no longer a member of the FNM and was back “home” with the PLP, a party he quit in 2004.

Interesting. The logic from head-damaged PM.

So by his convoluted logic, you are supposed to disregard Crisco Butt's failings because they are pointed out by a higher human being, and you will get a lesser one than Hubigetty. That may be true, but the lesser Hubigetty (Minnis) is orders of magnitude better than the corrupt, damaged, liar Crisco Butt. The PLP are a criminal racket that is a cancer upon the Bahamas, and needs to be excised in the next few days.

Comrade Banker, here we are facing-off in the 2017 General Election - 3 governing terms after former law partner Papa Huber's red regime - and about finish off the second governance under the other former law partner Perry - and we're back to an election battle between the two former law partners - after having completely sidestepped the Red Party's Minnis. Seems likes Papa has done what Long Island's Reheasa couldn't do - the silencing of Minnis?
The one and only new change to the 2017 General Election is that a vote for the DNA is more clearly a vote for another PLP government!

The law partners een so friendly any more. Minnis knows that he doon have to say much to win. Let Perry talk or let Perry's finger do the talking.

Got it right Perry, get swayed by Papa so we end up without you.

Much worse still, we could all end up with the the greedy power hungry corrupt Minnis as PM with the hidden agenda of those propping him up like the Symonette family, the Mosko family, the D'Aguilar family, the Holowesko family, and so on. Now that would surely be a fate worst than death for most honest hardworking Bahamian taxpayers!

Mudda: you are getting f*cking boring. The FNM is going to win the election and your monotonous blogs will do nothing to stop the tide of anger that will force Christie from power. Bran and the DNA have absolutely no chance in this election and are no more than spoilers. Their share of the popular vote will be less than in 2012 because voters understand the consequences of voting DNA this time around.

I just pray our country does not get what you are praying for.

God help us all!

Christie is fretting over "the final days of Rome". He is soon to be consigned to the history books as the worst ever Prime Minister of The Bahamas, the man who presided over four ratings downgrades and who took the country to the very edge of the economic precipice.

Comrade Honestman's, nobody since the bell got's rung has mentioned it but the only thing that stands on guard between the political influences of the Symonette's, Mosko's, D'Aguilar's, Holowesko's, Maynard's, Wilson's and so on and so on - are the working people of the nation - who will decide the next people's government.

Comrade, you and Mudda are morphing into one! Perhaps you are!

DDK I agree with you. As Bran/mudda does say two sides of the same coin

Re post @ Mudda, Do you honestly believe that voting for some supposedly "honest" unknown not affiliated with one of the two, or three if you like, major party's will influence the change in government so badly needed at this point? Do you envision a coalition government of these so called honest independents and who do you consider honest and competent enough to lead them? Have you taken a leaf out of Loretta's book "An end game was never part of the plan" or do you just enjoy being that voice in the wilderness?

Or we could end up with the corrupt PLP winning again being propped up by Nygard, Sebas, Flowers, Sir Snake, The Chinese, Big Bad Brad, etc. It has always been speculated that the Mosko's, being the savvy business people that they are, support both sides. So are the power hungry, mega rich supporters of either party, really any different. Mudda, still waiting to hear who you want to run the country. It seems like only the Almighty will meet your standards.

Somebody REALLY need to tell Perry Christie he is as relevant to the majority of Bahamians as yesterdays breakfast!

PM Christie lost this election years ago with the gambling referendum. He doubled down on his failure with the gender equality referendum and sealed his fate in stone by reneging on his 2012 "Bahamians First, We Believe In Bahamians" campaign promises.

Christie swayed the Bahamian people in 2012 with slogans, glitzy rallies, fake promises and fearmongering .......... That is what is eating at him ....... He is going to get a taste of his own medicine .......... If we vote for Minnis, we surely are not been swayed by his hype and sweet mouth ........ Doc has a strong team that he will manage (unlike Papa who ruled with an iron fist)

Mudda we tired of you mon... If you aren't a racist, you truly sound like one, and we don't listen to it or care about it anymore. Your monologues are BORING. Please hang it up. Thank you

It is a national disgrace how the government is politically prostituting the national radio and television stations to advance its own agenda. Sorry for the poor folks on the family islands who have no cable and only rely on ZNS.

What Perry Christie and the PLP failed to acknowledge is that even before Hubert Ingraham decided to join the FNM on the campaign trail and even before Brent Symnonette became a candidate for the 2017, the FNM became and organized, powerful and unified force and this is what has the PLP shaking in their boots, flashing the bird, having VAT attacks, blaspheming and basically running scared. While the FNM is growing stronger and stronger, and drawing more and more support, especially young people, the PLP is imploding. It has become an empty shell because while it(PLP) is all glittering and shiny on the outside, it is full of crime, corruption, scandals and incompetence on the inside. The PLP is killing its own self. It says Minnis cannot speak for himself but when Minnis spoke about voter registration problems they denied it. Then look what happened last week. When Minnis said if the FNM won, he would seek a proper sale for Bah Mar. They tried to make him the laughing stock. And when Hubert Ingraham said there was a major theft at the treasury, Perry dem denied it. Yet someone was fired for misappropriation of over $800,000.00. And the person he misappropriated the money to was known to him. And the money has not been paid back. And while someone has been fired no one has been charged with a crime or even had a civil lawsuit brought against them to recover funds. But guess what? Tomorrow is Election Day! Tomorrow soon come!

Um! swayed by Christie and all the recent hiring, $100 bills and other rewards at all our expenses. What a joke. And the reward 5 more years of favouritism , bribery, increases in VAT, further downgrade and the real probability of devaluation. And then we all suffer PLP's and FNM's but not the chosen few who reward themselves.

People of Bahamas, Change is good and will bring hope and security to the Bahamas.

“In the midst of chaos, there is also opportunity” ― Sun Tzu

I can't wait for God to take these corrupt PLP politicians from our earth. That is the day I will truly rejoice. The next few years will surely see at least a couple of them gone.