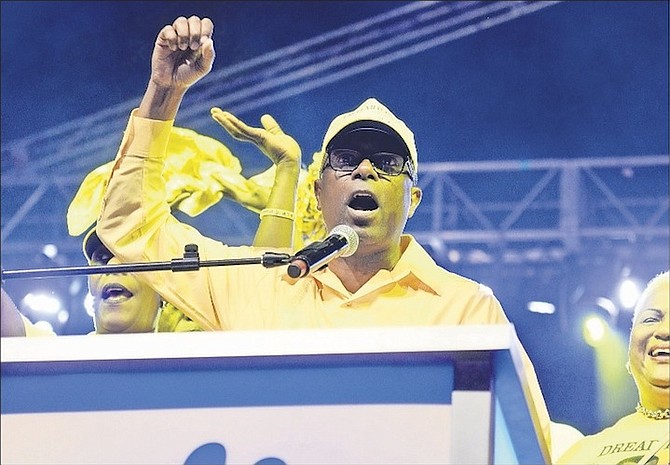 Evan Siegfried, a Republican strategist, in a statement on his personal blog, defended his recent suggestions that the Chinese government’s multiple investments in the Bahamas suggest that country’s ownership of the government.

Mr Siegfried wrote that in his interview with Fox News Radio personality Tom Shillue and humorist Andy Levy, which was widely shared in the Bahamas yesterday, he was stating “established facts” about the Chinese’s influence in the Bahamas that Mr Mitchell “has clearly been unable to rebut”, adding that “facts are facts, even if they don’t have a pro-Christie bias”.

His statement was posted on his blog just hours after Mr Mitchell had branded Mr Siegfried as having a “very serious problem of ignorance” for spreading “false, malicious and just plain silly” assertions about the Chinese government’s influence in The Bahamas.

Mr Siegfried had previously claimed on the American radio show that after the United States withdrew all government and private investment from The Bahamas following the Great Recession, the Chinese “swooped in” and now “own the Bahamian government” because they “invested so heavily in infrastructure”.

Mr Siegfried also suggested that the Chinese allegedly have some degree of influence over the general election process, as he said that today’s election “actually could swing to the opposition party, which was not supposed to happen solely because of China.”

Mr Siegfried also alleged that China is violating the Monroe doctrine - a US policy that warns European nations that the US will not tolerate the former interfering with the affairs of nations in the Western Hemisphere - and that China is making “geopolitical pawns” out of not just The Bahamas, but other “neighbours in our hemisphere”.

During a subsequent press conference at the Department of Immigration, Mr Mitchell said Mr Siegfried’s utterances were “nonsense and patent rubbish,” and a “convenient, short-handed way” of “frightening” people into thinking that the Chinese will only expand their influence in the country if the PLP is re-elected.

Mr Mitchell also said the “timing” of the statements made by Mr Siegfried was “designed to influence” today’s general election, of which he said the FNM and its associates stand to be the “beneficiaries”.

Charging that the Chinese investments in The Bahamas, particularly China’s involvement with Baha Mar by way of the Export-Import Bank of China (CEXIM), exists on “normal commercial terms,” Mr Mitchell said that the Chinese government has “no hold” over the Christie administration, and that there is “no evidence that China has any hegemonic designs on The Bahamas.”

“There is a bit of misinformation going around via a video with a commentator from Fox News making several assertions which are false, malicious and just plain silly,” Mr Mitchell noted in his statement.

“The Fox News commentator is obviously suffering from a very serious problem of ignorance. First, the United States as a government does invest in private sector projects in countries. US investors, private citizens and corporations, continue to be by far the largest foreign investors in The Bahamas.

“The Chinese government is perfectly able to speak for itself, but there is no evidence that China has any hegemonic designs on The Bahamas.

“The China Export Import Bank has financed commercial projects in The Bahamas and at present all loans are being serviced on normal commercial terms.

“The Bahamas itself is not involved in any way shape or form in any geo-political contest between larger countries.

“Any attempt to drag us into such contests is also false and malicious,” Mr Mitchell’s statement said.

In response just hours after Mr Mitchell’s press conference, however, Mr Siegfried, in a statement posted on his personal blog, said Mr Mitchell’s “desperate and confusing press conference” was a “clear demonstration” that “not only is The Bahamas plagued with less than scrupulous government ministers, but incompetent ones as well.”

He also denied that he was trying to influence today’s general election.

“My own comments about The Bahamas are rooted in facts,” Mr Siegfried said. “Officials in the US State Department under Presidents George W Bush and Barrack Obama both expressed their concern about China’s growing control in the Caribbean, which included the Bahamas.

“Experts and major media outlets, including the New York Times, Bloomberg, Forbes and others have also sounded the alarm about Chinese control of The Bahamas. Does (Mr Mitchell) consider them ‘fake news’ too?

“Facts are facts, even if they don’t have a pro-Christie bias.”

Mr Siegfried went on to refer to the Christie administration’s performance during this term, as well as the recent controversy surrounding Education Minister Jerome Fitzgerald allegedly seeking to secure millions of dollars in brokerage, trucking and limousine contracts at Baha Mar from as early as 2013.

The US commentator also cited a report he claimed was published in yesterday’s Nassau Guardian, claiming “unemployment in The Bahamas is a staggering 16.2 per cent nationwide and 19.5 per cent in Grand Bahama.”

However the story he referenced was a Freeport News article that was reporting on a 2013 Labour Force study, not recent figures.

The last nationwide unemployment figures from the Department of Statistics pegged the jobless rate at 11.6 per cent nationwide.

Mr Siegfried continued: “Yet, Fred Mitchell and Prime Minister Christie are not focused on solving that. Instead, they have made me and my factual comments the most important thing for them to tackle.

“Not unemployment, crime, addressing potential corruption within the Cabinet or improving the Bahamian economy.”

Meanwhile, Mr Mitchell called on Bahamians not to be distracted by such claims, suggesting they are merely by-products of the election cycle.

“He should stay out of Bahamian politics. It is none of his business,” Mr Mitchell said.

Well the one thing he said was correct.... the chinese have no hold over the gov't because as Nygard and Sarkis ga tell you when the PLP done with you dey drop you so fast you don't realize you ready hit the floor ......

Fred’S Investor Message: ‘Bring Money, Shut Up’ on 5th August 2015. If you google his name and read the pile of shit coming out of his mouth you don't even need a journalist to explain you the situation.

Fox news of all, they should speak to how the sister of Trumps son in law is doing her best to lure Chinese investors into America. Fox news is a part of the make America White again campaign .. and we do not fit into their plans.

Fred Mitchell is too haughty to even know when he's caught against a wall and a hard place and simply shut up.

Evan Siegfried may not be 100% accurate in his statements, but there is no denying he is accurate enough to make his case hold water more than Mitchell's duck, dodge, smoke and mirror rant.

Anybody that cannot see the Chinese owning the PLP simply does not want to see or is not intelligent enough to see.

The FNM should easily win todays election and we will have an opportunity to properly scrutinize the myriad of secret deals between the PLP and China.

Fox News could not stand President Obama. Because he was a black man. He could do nothing right. Shame on Fox news. Go now and speak to Kushner's sister.

Fox news sucks ,,But as a boat Capt I meet some interesting people .One is a black American television personality that told me about the Condos PGC and B Bethel received from the Chinese over looking Central Park in New York .He also told me about kicking Fitz and Bethel off his boat after they tried to get money from a group he was involved w/ that had a proposal for energy production in the Bahamas ..

"Mitchell also said the “timing” of the statements made by Mr Siegfried was “designed to influence” today’s general election, of which he said the FNM and its associates stand to be the “beneficiarie"

Not a wise move for Mitchell to use the weight of the entire country to fight some unknown commentator over info that Bahamians have generally accepted as true for more than a year AND as Siegfried correctly points out, President Obama himself warned us about trapsy deals with Communist Red China. This was not ground breaking, country muddying news, check Shame JFitzgerald, Grimes, Maynard, Roberts, Grey and those Cuban detainees for that.

FWEDDY IS JUST AN EMBARRASSMENT TO THE COUNTRY. SOCIOPATHS ARE OFTEN NARCISSISTS AS WELL. JUST LOOK AT THOSE ITALIAN SUITS HE LIKES TO WEAR. HE CANNOT PASS A MIRROR WITHOUT LOOKING TO ADMIRE HIMSELF.

IS THERE ANY PLACE ON THE PLANET THIS MAN HAS NOT VISITED ON YOUR NICKLE!

WAIT, NEXT TERM I BET HE'LL CONVINCE THE BAHAMIAN PEOPLE THAT HE NEEDS TO VISIT THE MOON, FOR ECONOMIC REASONS OF COURSE.

Comrades! Should the PM pull off a win - there's a good a window opportunity to see Freddy stepping into the shoes PM Christie upon his retirement from office and politics - within the first 90 days from today's date.
Freddy goin brungs lots credibility and stability with him to the high office PM.

Even if his statements are accurate, we don't need someone from many gallons of water to tell us whats going on in our Country, who cant see if don't want see it and this is where the ignorance lye, not only with Mr Siegfried but with our very own. Nevertheless I'm with Mr.Mitchell, when it come to speaking against The Bahamas we need to defend that shigggg!!!! at all cost. To Mr. Mitchell, you don't throw ya own under the bus for someone that is irrelevant at this time, you guys serve on different parties but are one Bahamian..

Looks like the myth that Bahamians have short political memories is finally SOLIDLY debunked once and for all!